Canadian sprinter Andre De Grasse made a winning return to the track on Thursday. De Grasse posted a winning time of 9.69 seconds in the 100 yard event at a Weltklasse meet that was reduced and spread out due to the COVID-19 pandemic.

Canadian sprinter Andre De Grasse made a winning return to the track on Thursday.

De Grasse posted a winning time of 9.69 seconds in the 100 yard event at the Weltklasse meet that was reduced and spread out due to the COVID-19 pandemic.

He finished ahead of training partners Omar McLeod of Jamaica and Jimmy Vicaut of France, with all three sprinters running in Bradenton, Fla. in an event billed as the Inspiration Games.

The Weltklasse track meet is normally held in Zurich as part of the Diamond League series, but only a few of the 30 athletes that participated in Thursday's eight-event program were at the city's Letzigrund Stadium. 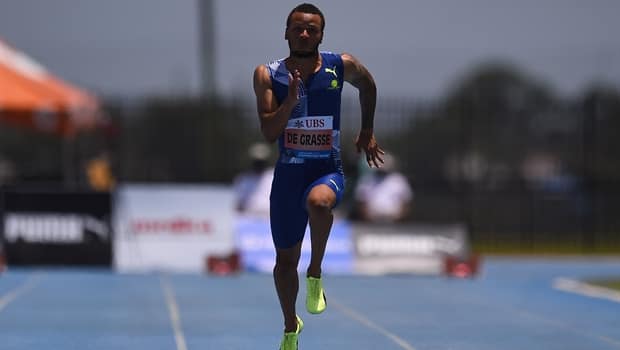 Others competed simultaneously, three athletes or teams per event, in one of six empty stadiums scattered across Europe and the United States. 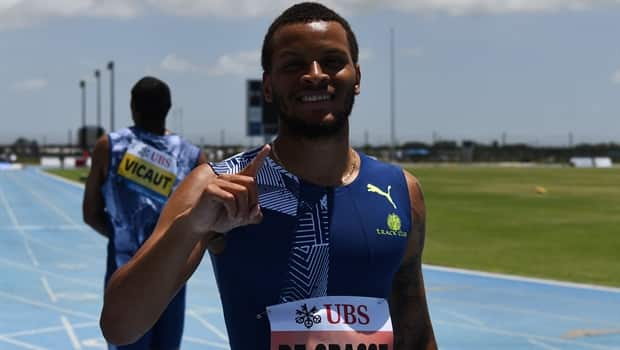 3 months ago
1:17
Andre De Grasse of Markham, Ont., speaks to the media after winning the 100 yard dash in Bradenton, Fla., as part of the Diamond League Zurich Inspiration Games. 1:17

De Grasse, a three-time Olympic medallist, was considered among the favourites in the 100 metres at the 2020 Tokyo Olympics before the Games were pushed back a year due to the novel coronavirus.

The 25-year-old from Markham, Ont., is coming off a successful 2019 campaign that saw him race to silver in the 200 and bronze in the 100 at the world championships in Doha, Qatar.