Moh Ahmed did more than just win a bronze medal in the 5,000 metres at the world track and field championships in Doha. He also proved Canadian athletes are now in the mix in the long distances for the Tokyo Olympics.

In the aftermath of Mohammed Ahmed's mad dash to a 5,000-metre bronze medal in Doha, the scene in the Canadian mixed zone was bizarre.

Jamaicans and Dutch broadcasters on either side were jumping up and down screaming with delight, (as were we Canucks if truth be told.)

Down on the track the 28-year-old Ahmed, who had just claimed Canada's first distance medal ever at any edition of the world championships, was draping himself in the flag and including his 23-year-old teammate, Justyn Knight, who had finished an admirable 10th in the same race, in the celebration.

In the stands the many fans from the East African nation of Ethiopia were creating a hullabaloo because their men, Muktar Edris and Selemon Barega, took gold and silver medals, respectively. Then again, that was not something that came as a surprise but rather as an affirmation of the dominance of athletes who had been nurtured in that part of the world in distance running.

What Ahmed did was different.

He and his family came to Canada from Mogadishu, Somalia when he was 11 years old. From the Horn of Africa, which includes the running powerhouses of Ethiopia, Kenya, Eritrea, and Somalia, Ahmed had fashioned his rise to prominence in North America, in St. Catharines, Ont., and the University of Wisconsin at Madison of all places.

Earlier in the week Ahmed had revealed that he trusted his roots but that he was most interested in blazing a trail for the place he called home when he reflected on a personal-best time and national record in the 5,000m recorded earlier in the season which made him one of the very few men in the world to run under 13 minutes over that distance.

"I was born in Somalia, I've got the desert in my blood," he said on the eve of the semifinal. "But I'm proud of that record because it's something that the entire Canadian running community can savour."

WATCH | Moh Ahmed fights back to reach podium in Doha: 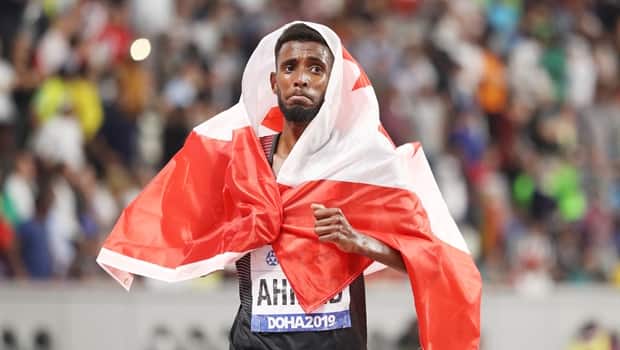 And then after a bold move with three laps to go, a number of stumbles in the final few moments, and the final, desperate push, Ahmed gave all Canadian runners, regardless of age or ability, reason to believe that we too in this country can go the distance.

"This is huge for the Canadian distance community," beamed young Knight, who arrived to our mixed zone while Ahmed was being liberally feted by the international media. "Moh is such a great guy. He brought me over with the flag. I really appreciate that. I'm going to wait for him right here if that's OK."

And then when the great man arrived, the two of them, Ahmed and his young understudy Knight, danced and embraced before us and whooped it up, because they had finally been part of a breakthrough moment in Canadian sport.

"To be honest I don't know where the hell I am," exclaimed Ahmed as he first reacted. "It's just surreal."

And then, gathering his strength, he began to ramble and reflected on all the things that had taken him to this point. He spoke of the Commonwealth silver medals at 5,000m and 10,000m last year in Gold Coast, Australia, and the disappointment of being fourth at the Olympics in Rio three years ago, and all of the times that he had been fourth or sixth or seventh in a race. But this time, he surmised, he was not going to let that happen.

"With a few laps to go I said [expletive]," Ahmed exclaimed. "I'm not going to be a passenger … I'm going to make some moves. This time I didn't miss out. I'm on the podium and I'm happy to do it because this is something that the Canadian distance community can share." 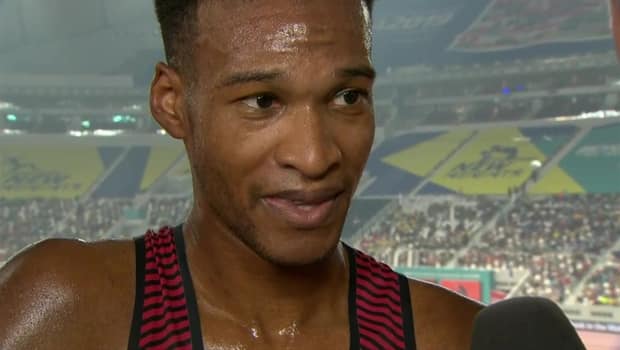 Ahmed is a two-time Olympian, having competed in London in 2012 and Rio in 2016. But he also reflected on a pivotal moment in his career when he raced to sixth in the 10,000m at the 2014 Commonwealth Games in Glasgow, Scotland. He did much of the work leading out his senior teammate, Cam Levins, who eventually claimed the bronze medal.
Ahmed remembered that after the race Levins had included him on a victory lap around the stadium with the Canadian flag.

Afterward, Levins had offered the reason why he took his 23-year-old compatriot along for the ride.

"I haven't done that before, I've never been in a position to do that before so me and Mohammed, we enjoyed that together," Levins said. "The great thing about Moh is that he's as happy for me as I'd be for him in the same position. Hopefully next time we're up there on the podium together."

Levins has gone on to become the Canadian record-holder in the marathon and is targeting that distance at the Olympics in Tokyo next summer.

But for now, Ahmed is making sure that he's taking the lesson of that moment he spent with Levins to heart as he realizes the significance of his accomplishment.

"I remember the Commonwealth Games when Cam Levins included me in the celebration of his medal," Ahmed said.
"You've got to taste it to know what it's like and to want more of it.  I'm not going to be young forever and guys like Justyn will be doing it soon."

There is still the 10,000m race to come, on the final day of the championships. Ahmed is ranked sixth in the world in that discipline. The possibility exists that he may yet create some more magic in Doha.

Just as another athlete born in Somalia, the four-time Olympic and six-time world champion at 5,000m and 10,000m, Mo Farah, did for Great Britain. Farah brought these events to light for track and field fans in Western Europe and around the world.

Ahmed had done that too and proven that Canadian athletes are now in the mix over the long haul at these world championships.