Mo Ahmed continues putting his name in the Canadian track record book. On Friday, he unseated Cam Levins to become the fastest Canadian to run the 10,000 metres.

Mo Ahmed continued his record-setting year, breaking another Canadian record Friday at the track and field world championships in London.

But Ahmed, of St. Catharines, Ont., is tired of hearing about all the Canadian marks he has been putting his name atop of. 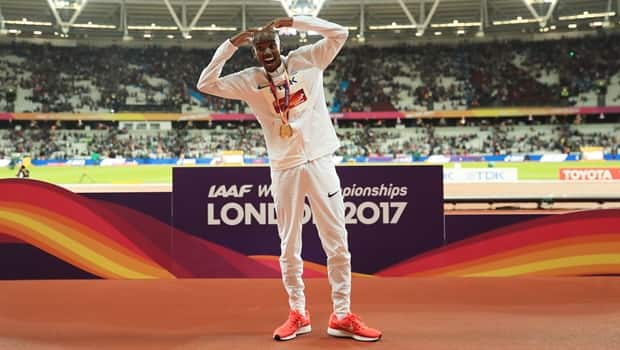 In his pursuit of that the Bowerman Track Club runner has spent this season wiping Levins' name from the Canadian record book.

Levins, though, couldn't be happier for Ahmed, who he calls a friend and a great athlete deserving of the Canadian record.

"I'm happy that he ran well," Levins said. "Records are meant to be broken. I can't go and complain that someone else ran a good race."

Levins followed Ahmed's race on Friday from Cape Elizabeth, Maine, where he is running the Beach to Beacon 10-kilometre road race on Saturday.

Levins, who recently parted from coach Alberto Salazar and the famous Nike Oregon project training group to reunite with his college coach at Southern Utah University, said he likes having strong competitors in Canada.

"Over the last couple of years his 5k has improved, so I think it was just a matter of time until he got into a good, fast 10k and put down a strong time," Levins said of Ahmed. "Part of it is just being in the right race and he was.

"It was super competitive and you couldn't ask for a better field. He got pushed the entire time, didn't have to sit, wait and not doing any work, and was rewarded for it."

Ahmed wanted to improve on his finish in last year's Rio Olympics, where he was dead last in the 10,000.

"I'm the Canadian 10k junior record-holder, I've always thought of myself as a 10ker, and last year was a big motivation to come back this year, and kind of take revenge a little bit," Ahmed told Canadian Press. "I wanted to ball, I wanted to have fun, I wanted to fight. I did that, it just wasn't enough."

For a brief moment late in the race, Ahmed passed Farah into third spot.

"The pace was very variable early on but he [Ahmed] didn't panic and stayed close to Mo Farah which was a clever thing to do," said CBC Sports track and field analyst Dave Moorcroft. "He got clipped and bumped a number of times but again, didn't panic.

"He fought every step of the way, ran tactically very well and a personal best and Canadian record is a terrific performance.

"If he can recover well it sets him up nicely for the 5,000 next Saturday," Moorcroft said. "He will need to make sure he covers any break over the last three laps. He is mixing with the best in the world now and belongs in that elite group."

Ahmed, who finished fourth in the men's 5,000 at the Rio Olympics last August, holds the Canadian outdoor record at 13:01.74.

Levins noted that Ahmed's performance on Friday is added motivation as he continues to regain top form following surgery last summer on his left ankle.

"All I can do is go out and train and try to take it back," said Levins of the 10,000 record. "I don't think it's something to be bummed about. Just keep moving forward."​