Geoffrey Kirui of Kenya won the men's marathon at the world championships on Saturday in London with a come-from-behind run finishing on Tower Bridge.

With some iconic London landmarks serving as a backdrop, the world championships produced a pair of stirring marathon races on Sunday.

Both Geoffrey Kirui of Kenya and Rose Chelimo of Bahrain came from behind to win gold medals on Tower Bridge.

Kirui earned Kenya a record fifth men's marathon title in the morning by beating Tamirat Tola of Ethiopia in a seesaw race. Then, the Kenyan-born Chelimo and Edna Kiplagat produced a similar back-and-forth contest in the afternoon to give the diminutive runner her first major international title.

Along the scenic River Thames and passing by sights including Saint Paul's Cathedral and the London Eye, big crowds were on hand to underscore the mass appeal of the championships in the British capital.

Kirui had to come from behind to pass Tola in the final quarter of the race. And once he got through the winding streets of London, Kirui found the way clear for a victorious run over the last miles. 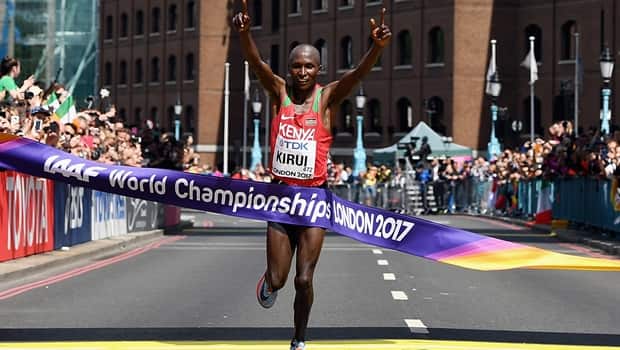 Kirui won in two hours, eight minutes and 27 seconds, creating such a gap over Tola that he had time to slap the outstretched hands of fans in the finishing straight before crossing the line. Tola weakened at the end and just held off bronze medallist Alphonce Simbu of Tanzania.

Tola first shook off Kirui about three-quarters through the race but overestimated his strength. Slowly, the Kenyan came back and took over the lead by the 35-kilometre mark.

"I feared the Ethiopian because he had such a fast time, so I just followed my plan to 35K and then felt my body to see how I was doing," Kirui said. "Good for me it responded well."

Thomas Toth was the top Canadian, finishing 54th in a time of 2:23:47. Fellow Canadian Eric Gillis was forced to abandon his race due to illness.

Kirui, who won the Boston Marathon in April, got his nation its first men's marathon title since 2011.

In the women's race, Chelimo chased down Kiplagat over the final miles to win the biggest title of her career.

She kicked on the uphill stretch to the finish and Kiplagat could not respond. Chelimo finished in 2:27:11, seven seconds ahead of Kiplagat, who barely beat a hard-charging Amy Cragg of the United States for silver.