Canadian record-holder Cam Levins says he's ready for a "really quick" time at the London Marathon as he pursues the Tokyo Olympic standard. Tristan Woodfine will join him in Sunday's race while Brent Lakatos competes in the men's wheelchair event.

Cam Levins only ramped up his training in late August for Sunday's London Marathon — a typical buildup can last 12 to 18 weeks — yet he's "ready for something really quick with the right day" while in pursuit of the 2021 Tokyo Olympic qualifying standard.

Jim Finlayson, a two-time Canadian champion and Levins' coach of less than a year, is confident the 31-year-old is fit enough to break his national record of two hours nine minutes 25 seconds.

"Our top priority is hitting the [2:11:30] Olympic standard," Finlayson said this week, "so this may not be the race we want to go all in. But … he'll have the [competitive and fast] field and course for it."

Levins didn't gain entry to the 40th London Marathon until Aug. 23, two days after running a 1:02:12 half marathon in a time trial on a non-certified flat course on Sauvie Island near his home in Portland, Ore. His 1:02:14 personal-best time was set on Jan. 19 of this year at the Houston Half Marathon.

Levins didn't go too hard in training this summer as he waited to see if the race schedule would open up amid a coronavirus pandemic. The Black Creek, B.C., native made a push for London once the recent time trial showed he was in better shape than he and Finlayson expected.

"I'm in considerably better shape than I was [in August]," said Levins, fresh off a month of altitude training in Utah, with a nod to Finlayson. "The biggest change is the crazy good workouts he's given me and he has not been afraid to push me. He knows what he wants to do, understands the science behind it and he's been valuable."

Sunday's men's elite-only race, scheduled for 5:15 a.m. ET, will be contested in a "secure biosphere" or bubble on a 2.15-kilometre loop course sealed off from the public around St. James' Park in central London, replacing the traditional tour of city streets due to the coronavirus pandemic.

Levins, fellow Canadian Tristan Woodfine and the rest of the 40-man field will complete 19 laps, plus 1,345 metres en route to the iconic finish on the Mall in front of Buckingham Palace that remains the same as previous years. There is no "mass event" this year so 45,000 virtual runners will compete from around the world.

"Workouts have gone really well and I think a flat course is advantageous," Levins said in a recent phone interview. "It's a very competitive field this year and the opportunity to race any [World Marathon] Major is really exciting."

Eliud Kipchoge of Kenya and Ethiopia's Kenenisa Bekele, the only two men to go under 2:02.00 for the marathon, were expected to be the headliners for Sunday's race, which was pushed back from April. The 35-year-old Kipchoge, who won for a record fourth time in London last year, broke the world record of 1:59:40 in an unofficial race in Vienna in October 2019.

Bekele, 37, clocked 2:01:41 the same month at the Berlin Marathon but on Friday withdrew from Sunday's race with a left calf injury.

Levins' initial plan was to race at the Rotterdam Marathon on April 5 in the Netherlands until it was cancelled in March because of COVID-19. He was forced to withdraw from the 2019 London Marathon with a muscle injury underneath his left knee that has "long not been an issue." 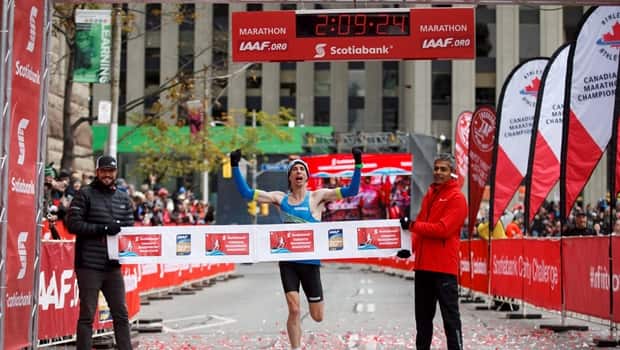 "Cam is healthy and has been feeling good through this entire year," Finlayson said. "Being able to build for a couple of seasons without interruption has given him a lot of poise in his running."

Woodfine, like Levins, is excited to see how he performs in London after a strong summer of training that included four or five quality long runs of 30-40 km on a 1.8 km flat loop course near his home in the Ottawa Valley.

"I think he's going to surprise some people," Levins said of Woodfine, with whom he trained in Kenya earlier this year.

Woodfine raised eyebrows late in 2019 when he finished second to Trevor Hofbauer among Canadian men in the Toronto Waterfront Marathon as his 2:13:16 finish was a two-minute drop from his previous PB of 2:15:19, set nine months earlier in Houston.

"[London] might be the fastest marathon course I get to run in my career so I'm excited to have had the buildup I've had," said Woodfine, 27. "I've been able to hit times and paces I've never hit before. Anytime I do similar workouts to my Toronto build I've been running much faster, so I take a lot of confidence from that."

Woodfine told CBC Sports the addition of 5,000- and 10,000-metre track work to his summer training has made the slower-type marathon workouts "more relaxing and easy."

Meanwhile, defending women's champion Brigid Kosgei of Kenya will headline a field of 29 elite runners that doesn't include Canadians. However, Canada's Brent Lakatos is part of the field of 15 in the men's wheelchair race on Sunday at 8:15 a.m. after finishing 12th last year.

Today was my last extreme workout before <a href="https://twitter.com/LondonMarathon?ref_src=twsrc%5Etfw">@LondonMarathon</a>. A what a confidence booster it was! Now begins a 2 week taper. So grateful that the organisers have been able to put on this event amid covid. Can't wait!

Lakatos, who lives about 140 km northwest of London in Longborough, England, finished the 2019 season with two gold medals and a silver at the World Para Athletics Championships. The 40-year-old Montreal native has won 18 WPA medals, including 13 gold. 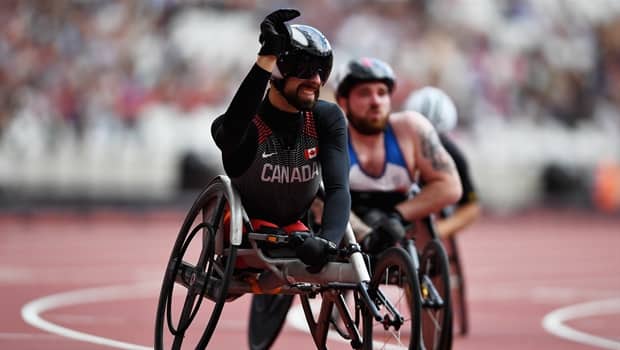 An engineering grad from the University of Texas, Lakatos will probably test the racing wheelchair he designed earlier this year ahead of what he hoped would be his fifth Paralympic appearance.

In June, the seven-time Paralympic medallist, 11-time world champion and 2018 Berlin Marathon champ was named Para-athlete of the year by Athletics Canada.