Canada failed to finish on Saturday at the IAAF World Relays after dropping the baton on a handoff in the finals, costing the Rio Olympic bronze medallists a chance to qualify for the 2017 IAAF world championships.

Team fails to qualify for 2017 championships after dropping baton 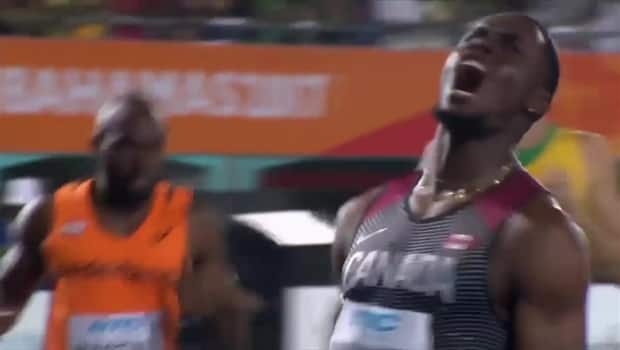 4 years ago
0:48
The Canadian men's 4x100m relay team dropped the baton in the final at the World Relays in the Bahamas, failing to complete the race. Andre De Grasse, who was running anchor, didn't get a chance to run. 0:48

It was a disappointing end for the Canadian men's 4x100-metre relay team.

Canada failed to finish on Saturday at the IAAF World Relays after dropping the baton on a handoff in the finals, costing the Rio Olympic bronze medallists a chance to qualify for the 2017 IAAF world championships.

Second-leg runner Aaron Brown and teammate Brendan Rodney mishandled the pass off, leading to a disqualification.

Akeem Haynes, Brown, Rodney and Andre De Grasse qualified for the finals after winning their heat in 38.21 seconds, which was faster than the best time in the finals.

Along with the medallists, Australia and France qualified for the 2017 world championships with their respective fourth- and fifth-place finishes. Because Canada, Britain and the Netherlands failed to finish, the remaining three qualifying spots went to the top three in the B-race. Those three teams are Trinidad and Tobago, Germany and Bahamas.