Andre De Grasse continues to build for the world track and field championships in August, posting his second 200-metre victory of 2017 on Thursday in a season-best 20.01 seconds at the Golden Gala in Rome. 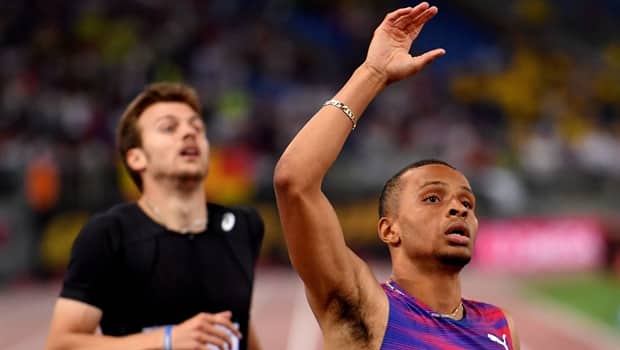 Andre De Grasse continues to build for the world track and field championships in August, posting his second 200-metre victory of 2017 on Thursday in a season-best 20.01 seconds at the Golden Gala in Rome.

The 22-year-old Markham, Ont., runner would have run sub-20 seconds on a calm night at the Olympic Stadium had he not let up in the final metres and looked back to his right.

"This was a relaxed race for me. I wanted to come home and stay relaxed," De Grasse said. "My coach [Stuart McMillan] told me to just hit it and to bring it home well."

"Every race [for De Grasse] is a systematic build to London [and the tracks worlds in August]," CBC Sports analyst and 1996 Olympic 100 champion Donovan Bailey said earlier this week.

This was De Grasse's final 200 before the Canadian trials and worlds.

"My aim is to get three medals, like in Rio, definitely," De Grasse said. "We have a strong relay team and I also hope to win a final in London.

"Bolt is a big target for me," De Grasse added. "It's very exciting to be part of the young generation coming after Usain."

De Grasse clocked 20.14 at the Jamaica International Invitational in late May for his first 200 win of the season. His personal best is 19.80, set at the Rio Olympics last August in Brazil, where he finished second behind Jamaican superstar Usain Bolt.

His Canadian relay teammates, Aaron Brown and Brendon Rodney, failed to improve upon their disappointing results at the Diamond League meet in Shanghai last month.

Bailey said Thursday's race was an opportunity for the Canadian duo to establish themselves on the global circuit as individuals. 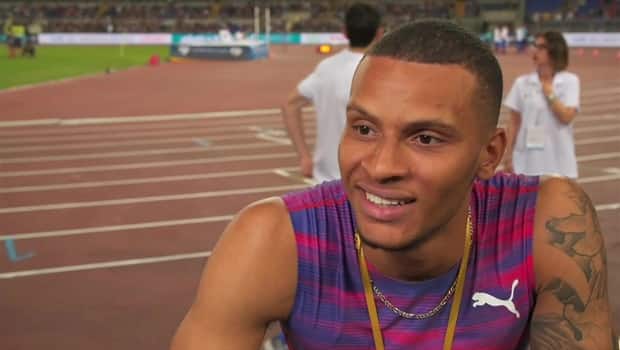 4 years agoVideo
1:02
The Canadian sprinter reacted to his 200m win at the Diamond League Golden Gala in Rome 1:02

Brown also competed in the men's 100 in Rome, crossing the line in 10.35 to place eighth in the nine-man field. His season best is 10.30, recorded at the Grenada Invitational in St. Georges on April 8.

Elsewhere, middle-distance runner Gabriela Stafford of Toronto made a strong push in the final 400 metres to move from 14th to 10th in the women's 1,500, posting a season-best time of four minutes 4.87 seconds.

The 21-year-old met a world standard at the recent Prefontaine Classic, where she topped the field in 4:07.43, after running a season-best 4:08.41 the previous week at the USATF Distance Championships in Los Angeles.

For Aries Merritt, victory in the 110 hurdles marked his first Diamond League victory since a kidney transplant two years ago.

Merritt, the 2012 Olympic champion from the United States, clocked 13.13 to edge Orlando Ortega of Spain by five hundredths in the hurdles sprint.

"It was a bit sloppy," Merritt said. "I made many mistakes, hit a lot of hurdles but my speed is getting better. After 2015 it was tough but I am here and I am healthy, so I just need to stay focused and the results will come."

CBC Sports is providing live streaming coverage of all 14 Diamond League meets this season at CBCSports.ca and via the CBC Sports app for iOS and Android devices. TV coverage will be featured as part of the network's Road To The Olympic Games weekend broadcasts throughout the season.

The following is a list of upcoming Diamond League meets on CBCSports.ca and the CBC Sports app: