As soon as you get rattled, it's over.

When I ran the anchor leg to a gold medal with my Canadian teammates Glenroy Gilbert, Bruny Surin and Robert Esmie in the 4x100-metre relay at the 1996 Atlanta Olympics, it was my responsibility to motivate the guys as unofficial captain and leader.

The No. 1 thing was to calm them down. You can step on the line and botch the baton, so the ability not to make mistakes is a huge priority.

That was also foremost on my mind when I put together my all-time relay squad ahead of the 2017 IAAF World Relays in Nassau, Bahamas.

The bottom line is you must get the stick, or baton, to your teammate. There are zero excuses.

If you botch a handoff or stutter step in a relay, then your team has to make up that lost time. It's always you versus the clock.

In the first leg, you have to have the innate ability to start with a stick in your hand on a curve, so doing this on my all-time team would be American Jesse Owens, who won four gold medals at the 1936 Olympics in Berlin. 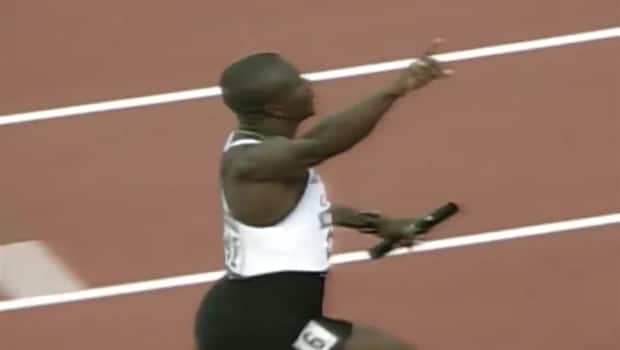 4 years ago
0:39
On his dream relay team, Olympic champion Donovan Bailey would run anchor ahead of three other Olympic greats. 0:39

I debated picking myself to lead off but went with the greatest sprinter that ever lived. Jesse had a short stride pattern, which means he would pop out of the starting block and definitely would be able to get the baton to the second leg. You come off the corner and you have to maintain speed because the outgoing runner on the second leg is going full speed on a straightaway.

In the second leg, you have to stay calm, call for the handoff and ensure the rhythm between how you are running and the stick that is being handed off is on target. Glenroy always had that responsibility because he was always careful and would never mess up. Bruny was good at setting a target for Glenroy and had the ability to run the corner well.

Running the second leg on my all-time team was a toss-up between 1992 Olympic 100-metre champion Linford Christie and Carl Lewis, a nine-time Olympic gold medallist. I'm going to go with Carl because he's done so much for track and field. Linford would be 1A. Carl is one of those guys that just refused to lose. He was always smooth and you knew he would show up and intimidate everybody along the way.

The third leg is usually reserved for an excellent bend runner and my bend runner is the greatest 100-metre sprinter that ever existed, Usain Bolt. He has an amazing pair of hands, is a huge target and you know he's going to get you eight seconds flat on the turn.

And then I'll anchor. It has always been one of the more responsible positions, or the one with the onus on a runner, because you have to have someone on the fourth leg that is fearless and has the ability to run someone down and pass them.

I've always been fearless, and in that scenario, I like the responsibility. If you put the four of us at our peak, there is no chance anyone would be within 25 metres of us. I think 34.50 seconds would be our time. Jamaicans Nesta Carter, Michael Frater, Yohan Blake and Bolt ran 36.84 at the 2012 London Olympics, a world record that still stands today.

As for honourable mentions, Olympic sprinter-turned NFL wide receiver "Bullet" Bob Hayes, who recorded a 8.5-second (hand time) anchor leg at the 1964 Tokyo Olympics, would be an alternate to the guys I chose.

The Jamaicans have been extremely dominant in track and field and Asafa Powell actually belongs on a lot of relay teams. I'd probably pick Asafa over Bob Hayes. He's a team guy and deserves all the accolades.

Jim Hines, whose anchor leg at the 1968 Olympics in Mexico City was reported to be 8.2 seconds at altitude, is another guy I like.