As he gets set to compete in his first Diamond League meet of the season, CBC Sports caught up with Canada's Derek Drouin to talk about what life is like as the reigning Olympic and world high jump champ. 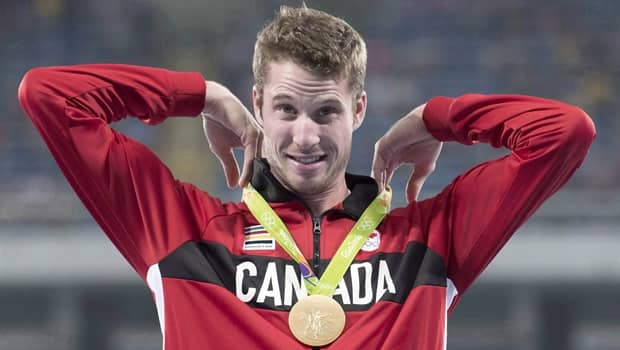 The reigning world and Olympic high jump champion from Corunna, Ont., will compete in his first Diamond League meet of the season on Saturday in Shanghai (you can watch live on CBCSports.ca and the CBC Sports app, beginning at 7 a.m. ET).

CBC Sports caught up with Drouin to find out what life has been like since he became an Olympic champ, and how he's feeling going into his first Diamond League competition.

[Editor's note: Answers have been edited for length and clarity.]

CBC Sports: How are you feeling physically and mentally going into this event?

Derek Drouin: I'm feeling about as physically prepared as I could have hoped. I'm not ready to jump at [personal-best height] bars right now, but that's intentional. It's only May and there's a lot of work to be done before the world championships in August. Right now is all about just being competitive. All the fine tuning comes later. Mentally, I'm feeling confident. I'm ready to get back in the mix and start competing again.

CBC: What has life been like since winning Olympic gold last summer?

DD: It was a little bit hectic immediately following the Olympics, but obviously it was an exciting time. That being said, I tried to get back to my regular training routine and my normal, quiet life as quickly as possible.

CBC: You plan to compete in a few decathlons this season. Does that change how you train for the high jump?

DD: My decathlon training is complementing my high jump training in the same way that it always has. Not a whole lot has changed in terms of how my practices have been structured, other than the actual decathlon competitions. I feel a whole lot stronger and more confident when I step onto the high jump apron, given the type of overall training I've been doing.

CBC: You're the reigning Olympic and world champion. Do you feel like you have a target on your back at every event?

DD: I don't feel any added pressure heading into meets. The way I approach every competition is to see all competitors on an even playing field. Past performances don't matter. It's all about who's ready to be the best on a given day.

CBC: Are you a hockey fan, and have you been watching the NHL playoffs?

DD: I am a hockey fan. I played travel hockey my entire childhood. My favourite team is the Detroit Red Wings, so unfortunately, for the first time in my active memory, I don't have any real investment in the NHL playoffs.

CBC: What can Canadians expect from you over the next few years? What's the goal now for you?

DD: I'm constantly changing and re-evaluating my goals. At the moment, I'm taking things year by year, with the immediate focus being an attempt to defend my world title this August in London. Although I can't promise anything, I will say that Canadians can expect to see me representing Canada with the same sense of pride and competitive spirit that I've always tried to exhibit.