Derek Drouin of Corunna, Ont., has won the gold medal in the men's high jump at the world track and field championships in Beijing, clearing 2.34m in a jumpoff. 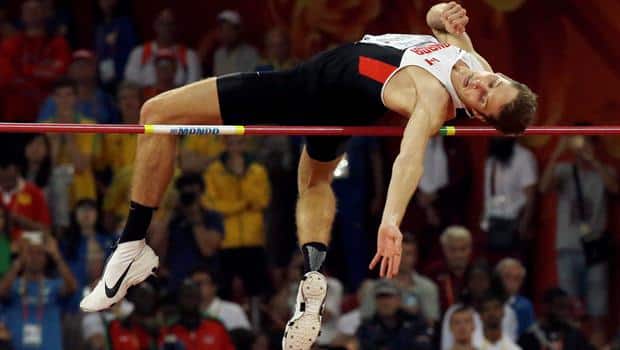 5 years agoVideo
0:55
Canadian gets the gold at world track and field championships 0:55

Derek Drouin won Canada's second gold medal of the world track and field championships Sunday when he was the only man in the men's high jump final to clear 2.34-metres.

His victory took the country's tally to a national record of eight medals.

The 25-year-old from Corunna, Ont., was among four men to have cleared 2.33m – he was flawless through that height. None of the athletes could make the next height of 2.36m, so the bar was lowered to 2.34m for a jumpoff.

Whether it was fatigue, or, the mental impact of watching him hit 2.34m on his first attempt, the defending world champion Bohdan Bondarenko of the Ukraine and Chinese favourite Guowei Zhang could not equal Drouin's performance and were each awarded a silver medal.

Another pre-meet favourite Mutaz Barshim of Qatar, who leads the world rankings at 2.41m, could manage only fourth. Drouin joins pole vaulter Shawn Barber as Canadians to win gold at the Beijing world championships.

"I was definitely telling myself if there was ever an opportunity, this was it," Drouin said. "I felt like I was the one to beat."

Minutes after Drouin leaped to the historic feat, he was trending on Twitter, prompting this response from Athletics Canada.

Drouin won the Pan Am Games in July with a season best of 2.37m, a height he matched a week later at the London Anniversary Games.

A year ago, he had jumped a Canadian record 2.40m in April before most of his competitors had even started the season. This time, he and coach Jeff Huntoon ensured he peaked at the right time.

Rain washed 'take off' mark away

A torrential downpour had covered the jumping apron and conditions were less than ideal but Drouin has proven himself time and time again that he is a championship jumper, winning bronze medals at the 2012 London Olympics and again at the 2013 world championships in Moscow.

"The nice thing about Mondo [tracks] is it doesn't get too slippery," Drouin said.

"It was a little frustrating when it hadn't rained all week and then it finally did today because I felt I was in a good place after the prelims. I knew exactly where my [take off] mark needed to be for the final for things to go smoothly. The rain washed all those preparations aside. I had to start back at ground zero."

Before the final started on Sunday, Drouin thought the wet conditions would see the height needed for a medal reduced to around 2.33m.

"I felt I was capable of a little bit higher. I was disappointed to miss 2.36m. I feel I missed a really great opportunity," he lamented.

"It's funny because a few months ago I was just so frustrated with the season. I went about a month and a half without clearing 2.30m, playing with a new approach and trying to peak at the end of the season.

"I got to the point where I just wanted the season to be done and forget about world championships. Luckily, I was patient and things finally worked out and things clicked and when they clicked they really clicked. I felt like I was in a really good place coming into here."

Drouin now heads to Zurich where he will compete in the Diamond League Finals on Thursday. He's aiming to get beyond the 2.40m mark and break his Canadian record.

Liz Gleadle of Vancouver, B.C., who had thrown 64.02m in the prelims struggled in the final of the women's javelin. She wound up 11th with a throw of 59.82m.

"It hurts and it's my worst meet of the year," said Gleadle. "But it's going to make me really hungry because I'm really upset right now."

Kathrina Molitor of Germany took gold with a world leading throw of 67.69m. Huihui Lyu of China thrilled the enormous crowd with an Asian record of 66.13m for the silver medal.

Leadoff runner, Carline Muir of Toronto, was upbeat about the Canadian result and pointed out that the team has now qualified for the 2016 Rio Olympics.

"We all wanted to be in the top three and get a medal," said Muir, who is returning from numerous injuries. "I think we all did a great job out there and ran our hardest and you couldn't ask for anything else."