​Andre De Grasse reverted to his early-season form of 2016 with a 10.21-second performance Friday for a fifth-place finish in the men’s 100 metres at the season-opening Diamond League event in Doha, Qatar. South Africa's Akani Simbine won the race in 9.99 seconds. 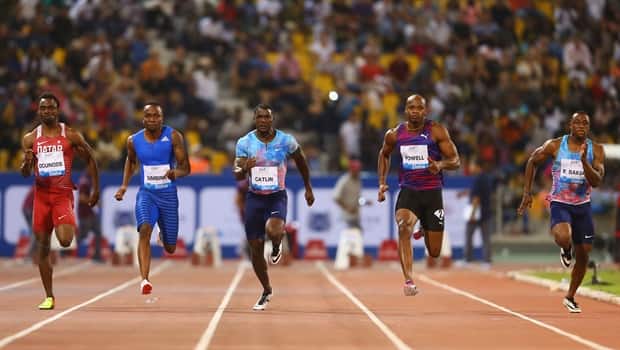 3 years ago
0:41
Canada's Andre De Grasse ran a 10.21 in the men's 100 metres at Doha Diamond League, falling to fifth place behind Akani Simbine and Asafa Powell 0:41

​Andre De Grasse reverted to his early-season form of 2016 with a 10.21-second performance Friday for a fifth-place finish in the men's 100 metres at the season-opening Diamond League event in Doha, Qatar.

The race was billed as an Olympic rematch after the Canadian star sprinter won a bronze medal last August in Rio de Janeiro, where veteran runner Justin Gatlin of the United States finished second to Usain Bolt.

Gatlin, 35, narrowly beat the 22-year-old De Grasse to the finish line on Friday with a 10.14 clocking at a breezy Qatar Sports Club stadium.

Akani Simbine of South Africa won in 9.99, his fourth sub-10-second performance of the season after entering Friday's showdown as the owner of five of the eight fastest times in the world this year.

Two-time world 100 bronze medallist Asafa Powell was second in 10.08, two weeks after the Jamaican withdrew from the IAAF World Relays in the Bahamas for "strategic reasons," according to his publicist.

Femi Ogunode of Qatar placed third in a season-best 10.13.

Last May in Eugene, Ore., De Grasse struggled in his first major test of the season, finishing last in a wind-aided 10.05.

He went on to prevail in the 200 in 20.16 at a Diamond League meet in Birmingham, England before winning the 100 at the Bislett Games in Oslo, Norway in a then-season-best 10.07. From there, De Grasse won three medals at the Rio Olympics last August.

He followed up his bronze and personal-best time of 9.91 in the 100 with silver in the 200 before running the anchor leg with Aaron Brown, Akeem Haynes and Brendon Rodney to set a Canadian record of 37.64 for relay bronze after the United States team was disqualified for an illegal baton exchange.

Organizers announced a week ago that De Grasse would be among the sprint headliners for Oslo Diamond League on June 15 and in Stockholm three days later.

Last June, he ran a then-season-best 10.07 seconds to win the 100 at the Bislett Games in Oslo, two weeks after finishing last at the Prefontaine Classic in Eugene.

George, 29, of Scarborough, Ont., finished a disappointing sixth in the field of eighth in the women's 100 hurdles, clocking 13.14 seconds.

The two-time Olympian arrived in Doha with confidence after placing third in a season-best 12.85 at last month's Grenada Invitational in St. George's. George was eighth in the 100 hurdles at the Rio Summer Games last August. She also made an impression at the Millrose Games in New York in mid-February, winning the 60m hurdles in 7.98 and recording a Canadian leading time of 7.27 in the 60 sprint.

Meanwhile, Newman tied for seventh with Kristen Brown of the U.S. with a distance of 4.25m on their second attempt. They missed all three tries at 4.45m.

In April, the 22-year-old Newman broke her own mark to set a new Canadian record of 4.71 at the Hurricane Alumni Invitational at the University of Miami. Her old mark was 4.61.

It was a gold and silver repeat from Rio with Ekaterini Stefanidi of Greece and American Sandi Morris finishing 1-2 with a height of 4.75 and 4.65, respectively. For Stefanidi, who reached 4.75 on her first attempt, it represented a season best showing.

Rounding out the podium was Cuba's Yarisley Silva, who turned in a season-best 4.65.

Dibaba no match for Semenya

The much-anticipated battle between Semenya, the two-time Olympic champion, and Genzebe Dibaba never materialized in the 800 as the South African convincingly won.

Ethiopia's Dibaba, the reigning 1500 world champion who has decided to focus on 800 this season, finished fifth in a disappointing 1:59.37.

Semenya said "the race was fantastic and the field was great."

Athletes will continue to compete head-to-head this season but the road travelled to a Diamond League title is different.

In the jumps, throws and long-distance events, athletes can earn points in four qualifying meets while those in the other disciplines could collect points in six qualifying competitions.

At a qualifying event, an athlete can pick up one to eight points, depending on where they finish. Once the last qualifying meet has been held, the top eight or 12 athletes in the overall standings advance to the final, to be held either in Zurich (Aug. 24) or Brussels, Belgium (Sept. 1).

CBC Sports is provided live streaming coverage of all 14 Diamond League meets this season at CBCSports.ca and via the CBC Sports app for iOS and Android devices. TV coverage will be featured as part of the network's Road To The Olympic Games weekend broadcasts throughout the season.

The following is a list of upcoming Diamond League meets on CBCSports.ca and the CBC Sports app: