In the early days of the COVID-19 pandemic, Canadian sprinter Crystal Emmanuel became more dedicated to her craft. Now, she is in control of her training and working with a sports psychologist to regain confidence and improve her focus during races.

Watching Crystal Emmanuel fail to keep up with the world's top sprinters through 100 metres was an all-too-familiar scene for coach Charles Allen in 2019.

Too often, the Canadian runner was effective out of the starting blocks and transitioning to top speed, only to lose momentum over the final 40 metres because she couldn't relax and stay focused.

"When there's a bit more pressure, she tends to go harder and starts fighting to try to get to the finish [line]," Allen said in a recent interview. "The best thing is to relax and try to maintain your top-end speed for as long as you can. That's the learning curve for Crystal."

With aspirations of running the 100, 200 and 4x100 relay at the Tokyo Olympics this summer, Emmanuel became more dedicated to her craft in the early days of the coronavirus pandemic when races were wiped from the schedule.

She is working with a sports psychologist in hopes of regaining confidence in the lead-up to races and during competition rather than questioning her ability to achieve success.

"I'm a strong overthinker and was putting too much pressure on myself," Emmanuel told CBC Sports about her 2019 season. "I knew what I needed to do but it didn't happen at the right time. Being able to slow my thoughts down and focus on one thing is my weak point in track."

At the 2019 world championships, Allen said the seven-time Canadian 100 senior champion "lost sight" of what she needed to do on the track on the way to a season-ending seventh-place finish in the semifinals.

"That year, she didn't have the right focus [entering competitions] to have the opportunity to execute the race she wanted," he said. "It was more mental than physical or the execution of the run." 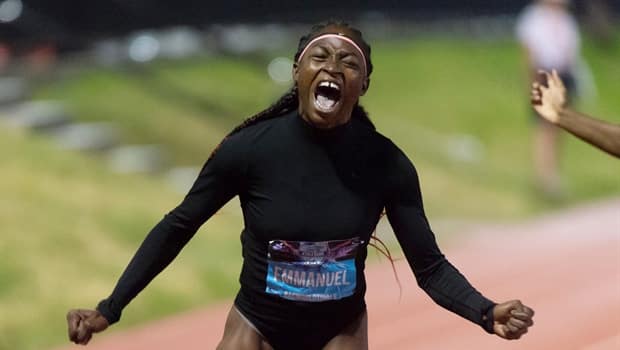 Emmanuel has taken control of her training and arrives with a plan for each session at the Toronto Track and Field Centre on the York University campus instead of relying on her coach. Allen said he challenges the 29-year-old sprinter to put her out of her comfort zone and asks her to critique the plan and return to the track with an alternative if it isn't performed to expectations.

Before the start to her race season, Emmanuel must develop a consistent pre-race routine she can rely on.

"A lot happens on the warmup track and you need to check the boxes to prepare," said Allen of Emmanuel, a two-time Olympian who was fourth in the 200 final at the 2019 Pan Am Games. "Then, you've got time in the call room to overthink and over-prepare before you have to execute on the track.

"Athletes must have their routine in place, so by the time they get to the track they're prepared to handle performing under stress. Being consistent with that through the year is key."

Allen isn't concerned about Emmanuel not qualifying in the 100 for Tokyo as her 2019 season best of 11.16 seconds is 1-100th of a second outside the automatic Olympic standard. She would also gain entry by maintaining her current top-20 world ranking.

The Toronto resident hit the 22.80 standard in the 200 in 2019 but still needs to qualify with her relay teammates. The top-eight squads at the May 1-2 World Athletics Relays in Poland will gain an automatic berth, said Allen, with the next fastest eight times from the world rankings also advancing. The Canadian women entered 2021 ranked 15th.

As for when Emmanuel will compete in a race, she considered some events on the World Indoor Tour in February and March but changed her mind when the lockdown in Toronto was extended recently with a stay-at-home order. The good news is her left foot is healed following a stress reaction diagnosis last spring and she returned recently to wearing spikes and working out of the starting blocks.

"You'll definitely see a more confident athlete who has a stronger purpose when she steps on the track and more clarity in what she's trying to accomplish," said Allen of Emmanuel's eventual 2021 debut. "With her mental fortitude now … [faster] times should be there."