What we learned at the track & field worlds: Canada went viral (not in a good way)

The track and field world championships were supposed to be filled with golden goodbyes and rivals clashing. Unfortunately for athletes and fans, the farewells were not so fond, and it turned out the biggest battle that played out over the past 10 days was between the human body and a stomach virus.

The 2017 IAAF track and field world championships were supposed to be 10 days filled with golden goodbyes and rivals clashing.

Unfortunately for athletes and fans, the farewells were not so fond, and it turned out that the biggest battle that played out in London, England, was between the human body and a stomach virus.

That sickness – which afflicted scores of athletes and coaches – and key injuries threw cold water on the big moments many were expecting and were also a large reason why Canada saw such a regression from two years ago.

The last world championships brought eight medals, including two gold, but this year Canadians left the worlds without a single podium finish for the first time since 2001.

Here's everything you need to know about what happened at the 2017 event.

The first sign that something was amiss in London, at least for Canadian track fans, was that a hamstring injury nixed what was supposed to be a final showdown between Andre De Grasse and Usain Bolt.

That was a shame for plenty of reasons, chief among them that De Grasse was looking to use a strong performance to prove he was ready to become the heir apparent to Bolt and take on the mantle of the world's fastest man with the Jamaican legend set to retire.

Some additional drama was added before competition began when Bolt said the last person he anointed as the "next one" had disrespected him. While the Jamaican didn't name names, an astute track fan could connect the dots about who he spoke of. It seems the two Puma athletes have made up, as they were spotted exchanging plesantries in London. 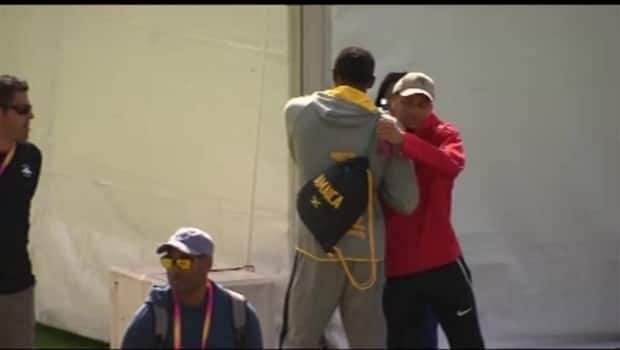 3 years agoVideo
0:14
De Grasse was forced to miss the World Championships due to a hamstring injury 0:14

In a stunning 100-metre final, Bolt failed to cap his career with another world title. And of course it wasn't De Grasse who dethroned him, but the crowd's favourite villain, Justin Gatlin of the U.S.

Gatlin's win also presented its own share of drama, especially when IAAF president Sebastian Coe – who placed the gold medal around the American's neck – told CBC Sports' Scott Russell that he still believes those caught doping, as Gatlin had been in 2006 and served a four-year suspension, should be banned or life. 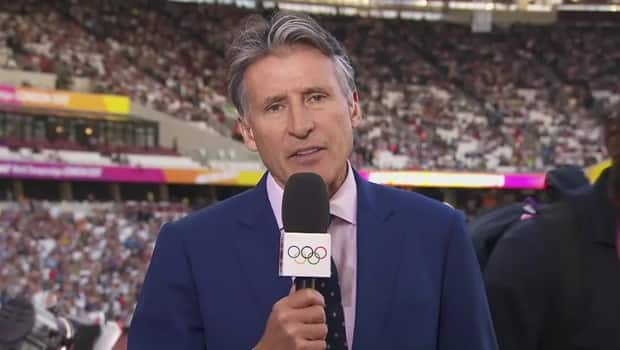 Not the ideal farewell tour

Bolt wasn't immune from the injury bug, either. His final race at the world championships will be remembered not for him powering Jamaica to another golden finish in 4x100, but for the 30-year-old pulling up on the homestretch with a leg injury. 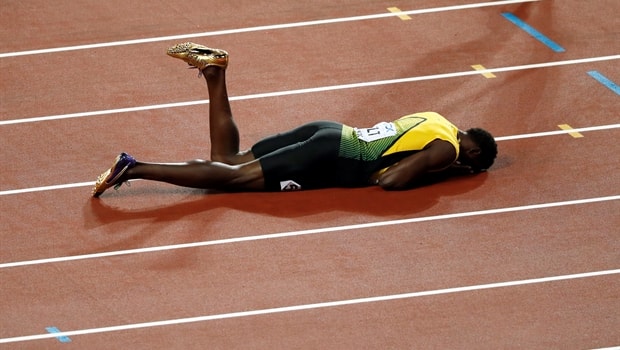 3 years agoVideo
1:00
Jamaican sprint star Usain Bolt finished off his final track world championships in a shocking way, clutching his left lag as he fell to ground as the anchor in the 4x100-metre relay. 1:00

Great Britain's Mo Farah also had his goodbye race overshadowed, albeit without the injury or stomach bug getting in the way. After claiming gold in the men's 10,000, Farah faltered in the 5,000, settling for silver in his final race. Canada's Mo Ahmed put down a Canadian record in the 10,000, finishing sixth, while rookie Justyn Knight was ninth in the 5,000. 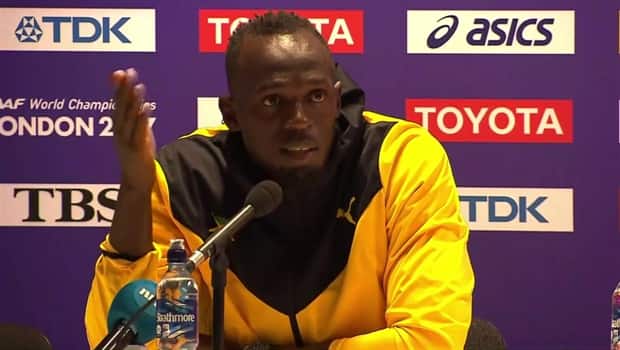 3 years agoVideo
21:39
After finishing his track and field career in London, Usain Bolt speaks with the media. 21:39

Bishop comes up short against Semenya

Canada's Melissa Bishop, who just missed the podium at the Rio Games, made it through to the women's 800 final, but watched once again as the event was dominated by South African phenom Caster Semenya.

Semenya has a condition known as hyperandrogenism, which causes some women to produce higher levels of male sex hormones such as testosterone – one of the key ingredients contributing to an athlete's strength and speed.

Bishop, who finished fifth, told CBC Sports after the race that Semenya's testosterone levels weren't something she focused on.

In another shocking result at an event chock full of them, Ramil Guliyev of Turkey upset Wayde van Niekerk's attempt at the 200/400 double, earning Turkey's first world championship gold medal in the 200.

The 25-year-old Van Niekerk, considered by many to be the heir apparent to Bolt as the next global figurehead for the sport, was attempting to complete the double in London after the South African won the 400 earlier in the week.

Isaac Makwala of Botswana finished sixth after a hectic schedule due to his bout with the stomach virus and quarantine forced him to miss qualifications. Makwala was granted a shot to qualify, but in an odd sight, ran the track on his own.

Makwala made it through that test, and the semifinals on the same day, but missed the podium in the final.

Missing from all this drama was Canada's De Grasse, who was also favoured to land on the podium in the 200.

The stomach bug responsible for so many athletes and coaches being quarantined also hit decathlete Damian Warner.

Widely expected to reach the podium in London – especially with his chief rival and good friend Ashton Eaton retiring – the London, Ont., native struggled in the first day of competition and revealed that he had been one of the unlucky ones stricken with the virus. 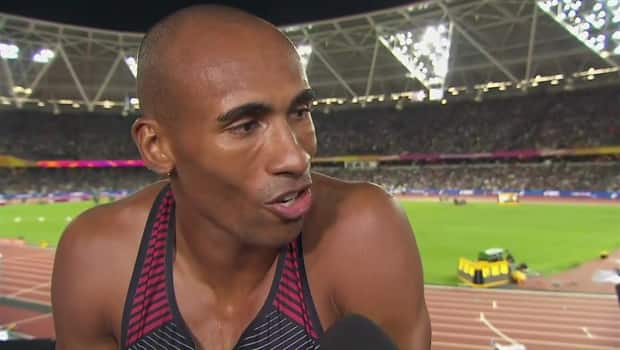 Damian Warner: 'I was quarantined for 48 hours, it took a lot of energy out of me'

After posting the fastest time in the hurdles on Day 2 of the event, Warner moved up to third overall, however he could not stick around in podium position, ending up fifth.

Canada's top high jumper may have avoided the stomach virus, but a nagging Achilles injury forced Derek Drouin to abandon his world title defence before his event began.

"I knew I was dealing with an injury that would make my chances of competing come down to the wire," Drouin said in a statement. "My support team did everything they could to give my Achilles time to heal, we didn't want to rush back. We just ran out of time."

Pole vaulter Shawn Barber was left as the only Canadian reigning champion available to mount a defence, but he ultimately fell in the men's final, finishing eighth.

The field events saw plenty of Canadian content: Alysha Newman and Anicka Newell finished seventh and 12th, respectively, in the women's pole vault; Brittany Crew made Canadian history with a sixth-place finish in the women's shot put final; and Liz Gleadle was 12th in the women's javelin final.

Canada head coach Glenroy Gilbert, who replaced former coach Peter Eriksson following a surprise firing after the Rio Olympics, said despite not cracking the podium, there are some positives to take from worlds.

"Obviously it's disappointing we weren't able to get the eight medals we were after," Gilbert told CBC Sports' Perdita Felicien. "We're looking at 12 top-eight performances from a lot of new athletes that are in our system.

"So we're looking more towards 2020 and hoping that those top eights... become our medal targets." 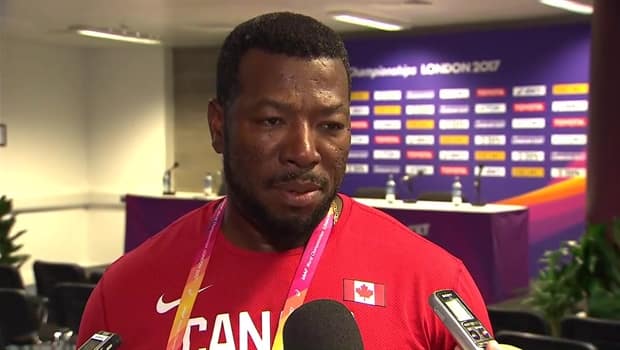 With files from The Canadian Press & Associated Press