Canada's Melissa Bishop finished fifth in the women's 800-metres at the world track and field championships. The 29-year-old from Eganville, Ont., ran one minute 57.68 seconds.

On a dreamy night two years ago at Birds Nest Stadium in Beijing, Melissa Bishop raced to a silver medal in the 800 metres — and it was just one of an extraordinary three medals for Canada on that day.

Two years after Canada's historic eight-medal bonanza in Beijing, the team heads home from London empty-handed for the first time in 16 years. The meet will be remembered for injuries and illness. Pictures of joyous Canadians draped in the Maple Leaf were replaced by images of dejection and frustration. 3 years agoVideo
5:37
The South African blazed down the final straight on her way to becoming the world champ. 5:37

Bishop was the last Canadian up Sunday night, racing to fifth in the 800 metres.

"I'm going to be honest, it's been tough to see just the unfortunate timing of things," Bishop said. "The [2015] worlds and Rio [Olympics] were so high, and to come off of that, I think it's hard for everybody. I really wanted to put Canada on the map with a medal tonight, but it's just not in the cards."

The 29-year-old from Eganville, Ont., ran one minute 57.68 seconds, and afterward lamented the fact she'd let herself get too far back in the pack when the leaders made their move with 300 metres to go.

"I don't think I ran my race," Bishop said. "It's coming, it's positive, it's nothing I'm upset about, the result is more what I'm upset about. I'm tired of 1:57s, I want something faster.

3 years agoVideo
1:19
The Canadian spoke with CBC Sports' Perdita Felicien after finishing fifth in the 800m. 1:19

Bishop's race was one of the most talked-about of the meet. Caster Semenya of South Africa, who won gold in 1:55.16, is at the centre of a dispute over whether females with excessive testosterone should be permitted to compete. Francine Niyonsaba of Burundi was second and American Ajee Wilson took the bronze. 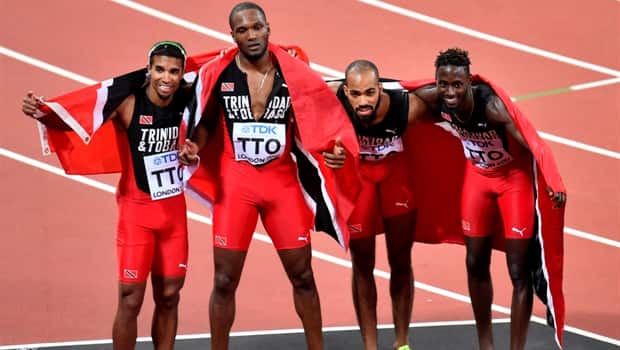 Trinidad and Tobago swept past the U.S. in the 4x400m relay to earn the last big upset of the world championships in the final event.

The United States had not lost at the world championships since 2003, but the Americans did lose in the Olympic final at the 2012 London Games in the same stadium.

Allyson Felix and Phyllis Francis won their second gold medals at the world championships by helping the U.S. win the 4x400m relay.

The favoured Americans, with 400 champion Francis running the anchor, won in 3:19.02. They finished about 50m ahead of silver medallist Britain. Poland took bronze.

Felix also won gold in the 4x100 relay on Saturday. The latest medal was the 16th of her career at the world championships, going back to 2005.

The relay gold also pushed the United States' overall total in London to 29 medals, another American record at the world championships.

Elijah Manangoi led a 1-2 Kenyan finish in the 1,500 metres at the world championships. 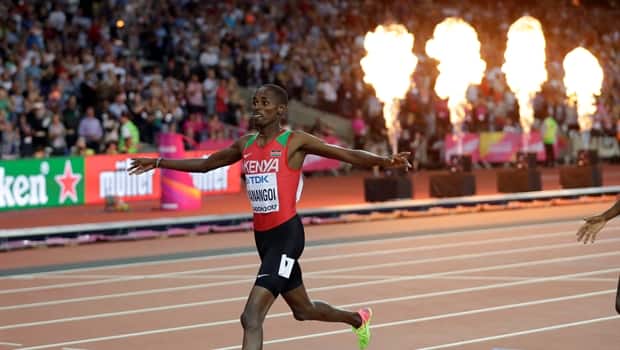 Three Kenyans were leading with two laps to go but three-time world champion Asbel Kiprop could not sustain the pace and fell back.

Mutaz Essa Barshim of Qatar won the world high jump title with a perfect series of jumps, clearing 2.35m without a miss.

Ilya Ivanyuk of Russia, competing as a neutral athlete because of his country's doping suspension, took silver with a jump of 2.32 metres.

Majd Eddin Ghazal of Syria got bronze jumping 2.29 and beating Edgar Rivera on a countback.

Two-time Olympic champion Sandra Perkovic won the discus with a throw of 70.31m , well ahead of silver medallist Dani Stevens of Australia.

Stevens set a continental record with a throw of 69.64. Melina Robert-Michon of France took bronze with a toss of 66.21.

It was Perkovic's second world title. She also won gold at the 2013 worlds in Moscow.