The Canadians will attempt to improve upon their surprising and record eight-medal showing two years ago in Beijing.

"Canadian success at recent Olympics, Paralympics and world championships has been noticed and respected around the world. We look to capitalize on that positive momentum and perform at a high level in London." 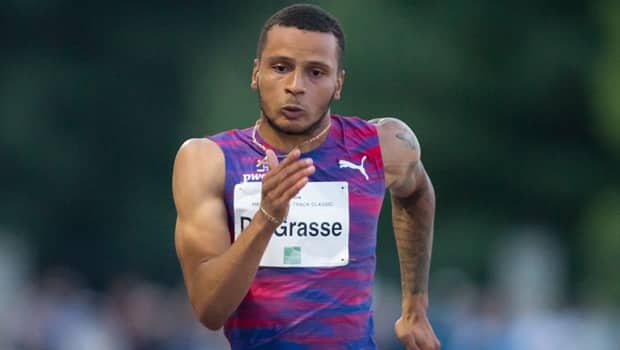 The Canadian team also boasts nine world medallists and nine athletes and one relay squad ranked in the top 10 on the International Association of Athletics Federations (IAAF) performance list:

At 2015 worlds, Barber calmly put on a display of pole vault excellence to secure Canada's first world title in track and field since Perdita Felicien won the women's 100-metre hurdles in 2003.

This season, Barber has struggled with consistency. The 23-year-old's season best is 5.71, set at the Prefontaine Classic at the end of May in Eugene, Ore., where Barber met the 5.70 world qualifying standard.

Barber, who won the men's pole vault at the recent Canadian track and field championships in Ottawa, finished fourth (5.60) at a Diamond League in Rabat, Morocco on Sunday.

Drouin, 27, is hopeful of defending his high jump title despite being forced to withdraw from last month's nationals, hampered by a "nagging" Achilles tendon injury.

After winning gold at the 2016 Olympics last summer, Drouin said he competed in Rio de Janeiro with two stress fractures in his spine. In March 2011, he tore two ligaments off his right foot that required two medal screws to be inserted and then removed three months later.

He last competed on June 15 at the Bislett Games in Oslo, Norway, where the native of Sarnia, Ont., tied for third with a jump of 2.25 metres before missing all three attempts at 2.29.

At the end of April, the six-foot-five jumper won a fourth consecutive Drake Relays title, matching the world qualifying standard of 2.30.

Drouin jumped 2.34 in Beijing for the 2015 world title after his victorious jump of 2.37 at the Pan Am Games in Toronto.

De Grasse, who won three medals in his Olympic debut last summer at Rio de Janeiro, will look to carry momentum from a strong 2017 sprinting season into worlds.

He'll face world-record holder Usain Bolt in a much-anticipated Olympic rematch in the 100 and 200 metres. Bolt won the 100 at the 2015 world championships, with De Grasse finishing in a tie for third.

Meanwhile, Canadian marathon record holder Lanni Marchant won't compete in the event but rather the 10,000 metres after racing the 5,000 at nationals. The 33-year-old, who dealt with pain in her hip, butt and quadriceps muscle the previous four years that led to cramping in her left calf, is now healthy and has her sights set on the Sept. 24 Berlin Marathon.

Here is the complete of Team Canada members headed for London: