The track and field world championships begin Friday (CBCSports.ca, 12:50 p.m. ET) with some of Canada's 57 athletes legitimate contenders for a podium finish and looking to help the team build on its record eight-medal performance of two years ago in Beijing.

The track and field world championships begin Friday (CBCSports.ca, 12:50 p.m. ET) with some of Canada's 57 athletes legitimate contenders for a podium finish and looking to help the team build on its record eight-medal performance of two years ago in Beijing.

Legendary sprinter Usain Bolt of Jamaica will also call it a career in London, England, where he will try to add to his 13 world championship medals when he competes in the 100 metres.

A much-anticipated showdown with Canada's Andre De Grasse was scuttled Wednesday with news the latter suffered a grade 2 hamstring injury this week in training. The injury will also keep De Grasse out of the 200 and 4x100 relay events.

Will high jumper Derek Drouin return from an Achilles injury to successfully defend his 2015 world title, along with fellow Canadian and pole vaulter Shawn Barber?

Can Damian Warner take the next step in decathlon and improve upon his Olympic bronze-medal finish?

Once again, the London, Ont., native and his Canadian teammates will carry a "we belong" mentality into London Stadium. It's a far cry from Canada's 2009 and 2011 squads that brought home a combined two medals.

"When you step up to compete, it's no longer [a feeling of being] in awe of other athletes. It's about going out and competing hard," hurdler and Canadian co-captain Phylicia George told CBC Sports on a recent conference call with reporters.

"A lot of people in the world are taking notice of [Canadians]. They know we're genuine threats and here to compete, not just participate."

Retired sprinter Glenroy Gilbert, whom Athletics Canada named head coach for worlds and made it a permanent appointment in July, is hoping the team can reach a double-digit medal count in London by converting the fourth-place finishes from last summer's Rio Olympics, where Canada medalled six times.

Melissa Bishop was fourth in the women's 800 metres, matching Jenny Thompson's best placing from 1928. On the men's side, Mo Ahmed's fourth in the 5,000 was a big improvement on the previous Canadian best of eighth, while Evan Dunfee crossed the line fourth in the 50-kilometre race walk.

"If athletes focus more on the task rather than the end result," said Gilbert, "then the end result with speak for itself. We want the athletes to come away not only with a great experience, but a personal best [result] also counts, and goes a long way in preparing athletes further in our sport."

London will be the biggest world championships in history as ticket sales topped 660,000 last week, far exceeding the 2009 record gathering of 417,156 in Berlin. The first three nights of competition in England will be preceded by ceremonies to reallocate medals previously won by those that later failed a drug test.

Events will be shown on Road to the Olympic Games on CBC Television as well as live streamed on cbcsports.ca and the network's apps for iOS and Android.

He has struggled with consistency this season but remains competitive. On July 21, Barber jumped a season-best 5.72 metres in Monaco, matching the height of rival and current world-record holder Renaud Lavillenie of France and topping the 5.71 he achieved at the Prefontaine Classic in late May to meet the 5.70 world qualifying standard. (Final Aug. 8, 2:35 pm ET) 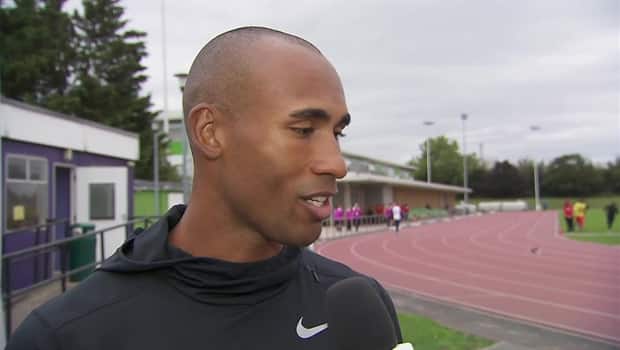 Damian Warner: 'There's only one more medal I want'

3 years ago
1:53
Canadian decathlete Damian Warner speaks with CBC's Perdita Felicien ahead of the upcoming track and field world championships. 1:53

The defending world champion hasn't competed since an Achilles injury "flared up" on June 15 at the Bislett Games in Norway, where Drouin tied for third with a jump of 2.25 metres. The 2016 Rio Olympic champion matched the world standard of 2.30 in April but has since struggled to reach that mark. (Final Aug. 13 at 2 pm ET)

Dunfee hasn't stopped since his controversial fourth-place finish at the Rio Olympics. In May, the 26-year-old walked the Vancouver Marathon and finished 133rd and the next month cracked the top 100 at the Scotiabank Vancouver Half-Marathon. (Final Aug. 13 at 2:45 am ET)

Warner, 27, has enjoyed success at the world championships, winning bronze in 2013 and silver two years later. In Rio, the London, Ont., native became the first Canadian since 1988 to capture a bronze medal. He followed that in May with a third career Hypo Meeting title, finishing 104 points shy of his own Canadian record (8,695). (Begins Aug. 11 at 5 am ET, ends Aug. 12 at 3:45 pm)

OTHER CANADIANS TO WATCH

The Syracuse University junior finished third at the NCAA Division I championships in June, one month after the Toronto native set a world standard and broke a Syracuse record with a personal-best time of 13 minute 17.51 seconds in California. (Final Aug. 12 at 3:20 pm ET)

The eight-time Olympic gold medallist clocked 9.79 seconds in 2015 for his third 100m world title, defeating Justin Gatlin and Canada's Andre De Grasse. Bolt prevailed over the pair again in 9.81 at the Rio Olympics (see video below) but this season the 35-year-old eclipsed 10 seconds for the first time in a winning performance (9.95) at Diamond League Monaco on July 21. (100 final Saturday at 4:45 pm ET; relay final Aug. 12 at 4:50 pm)

She will try to make her American fans forget about her false start in the semifinals at worlds two years ago and failure to make the U.S. team for the Rio Olympics. Harrison, 24, has run 12.28 seconds in 2017, just eight hundredths of a second outside the world record. (Final Aug. 12 at 3:05 pm ET)

Considered the heir apparent to Usain Bolt as the iconic figure in athletics, Van Niekerk first made his mark at worlds in 2015, defeating American LaShawn Merritt in 43.48 seconds. The South African ran 43.03 in Rio to break Michael Johnson's world record, and boasts a season and personal best of 19.84 in the 200. (400 final, Aug. 8 at 4:50 pm ET)