A slow start and a sloppy exchange doomed the Canadian men at the IAAF World Relays on Saturday. The 4x100-metre team featuring Andre De Grasse, Aaron Brown, Gavin Smellie and Brendon Rodney placed third in its heat and failed to qualify for Sunday's final with a time of 38.76 seconds.

A slow start and sloppy exchange returned to haunt the Canadian men at the IAAF World Relays on Saturday in Yokohama, Japan.

The 4x100-metre men's team featuring Andre De Grasse, Aaron Brown, Gavin Smellie and Brendon Rodney placed third in its heat and failed to qualify for Sunday's final with a time of 38.76 seconds.

Smellie ran the first leg and was quickly passed by the Japanese counterpart to his left before a slow baton pass to Brown.

De Grasse, anchoring the team, blazed through the final leg but couldn't make up enough ground. The result means Canada won't have the chance to defend its 2017 gold medal. 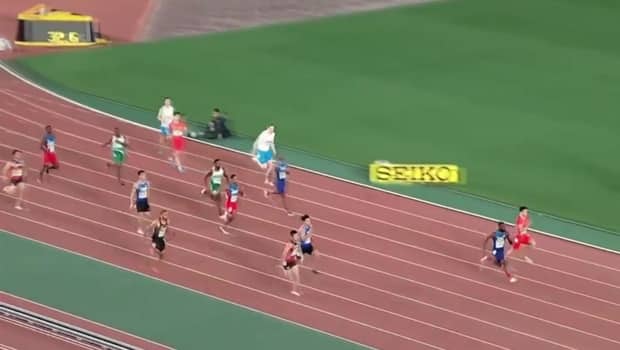 Canada finishes 3rd in heat in the 4x100m at World Relays

1 year ago
1:20
Canada did not qualify for the 4x100m relay final after finishing third in their heat (due to a Japanese disqualification). 1:20

The top two teams from each heat as well as the next two fastest teams advance to the final. There was 10 teams faster than Canada on Saturday. 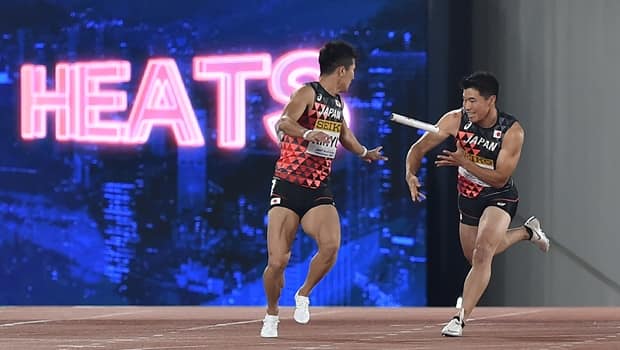 Japan DQ'd in 4x100m for throwing baton at World Relays

1 year ago
1:36
Japan messed up the final handoff at the World Relays, and ended up getting disqualified in the 4x100m. 1:36

The foursome roared to victory in its heat in three minutes 28.75 seconds. Ukraine had originally won the heat, but was later disqualified.

Canada also appeared in the women's 4x100 race, but was disqualified for a late baton exchange.

The clean, well-executed run will give Canada the opportunity to race for gold on Sunday. The time also represented a new national record, surpassing the previous best of 3:23.60.

Nelvis pulled ahead on the third leg and Allen anchored the Americans to victory in 54.96 seconds. Host Japan was runner-up in 55.59. Australia was disqualified and Jamaica did not start the mixed shuttle hurdles relay, one of two new disciplines making its debut at the meet in Yokohama.

WATCH | Every heat from Day 1 at World Relays: 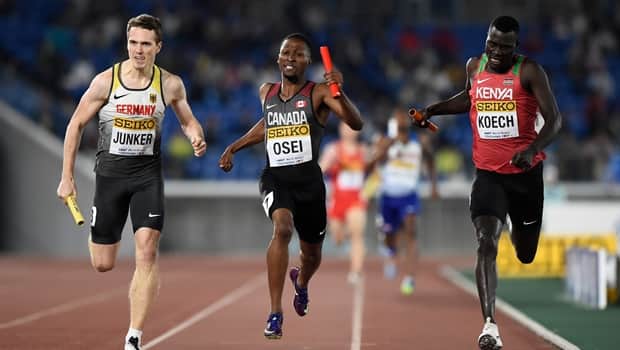 The U.S. leads the overall standings with 16 points, three ahead of Japan. Australia was third with seven points.

Catch all of Sunday's finals live on CBCSports.ca, with action beginning at 5 a.m. ET.