Canadian decathlete Damian Warner won the Hypo Meeting for the third time in his career as Day 2 of the event wrapped up in Gotzis, Austria on Sunday. 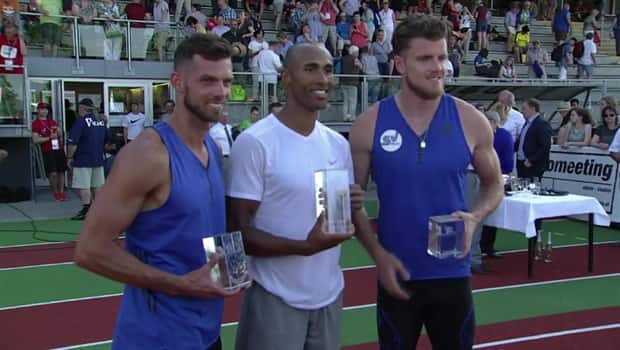 Warner finished the competition with 8591 points, 104 shy of his own Canadian record which was set at the 2015 world championships in Beijing.

The London. Ont., native led all competitors with 4532 points after five events on Day 1 as he looked to become just the third man in the history of the event to win it on three separate occasions.

"It's a hard-fought medal. It means a lot to me to win it for a third time," said Warner

"Based on what I did here in some events I am very confident going forward."

Eeclo Sintnicolaas of the Netherlands finished second with 8539 points, while Germany's Rico Freimuth was third with 8365.

Warner started strong on the second day of competition by posting the fastest time in the 110-metre hurdles (13.54 seconds) and adding another 1035 points to his total.

Although Sintnicolaas closed the gap to 46 points after nine events, Warner was able to maintain his lead with a distance of 57.69m and 703 points in javelin.

​Warner, a world silver and bronze medallist, won the prestigious event in both 2013 and last year.

The Hypo was to be Warner's only international decathlon before the world championships in London in August.

The 22-year-old Belgian finished with 7,013 points and joined American world record holder Jackie Joyner-Kersee, Russia's Larisa Turchinskaya and Sweden's Carolina Klueft as the only female athletes to have achieved the feat.

"Last year was incredible and I thought: 'Maybe that's my best.' But I just tried to do even better today," said the 22-year-old Belgian, who won Olympic gold in Rio.