Eight months after his star turn in Rio, and with the world championships looming this summer, Canadian sprint sensation Andre De Grasse has barely had a chance to catch his breath. But he did take some time for a quick Q&A with us. 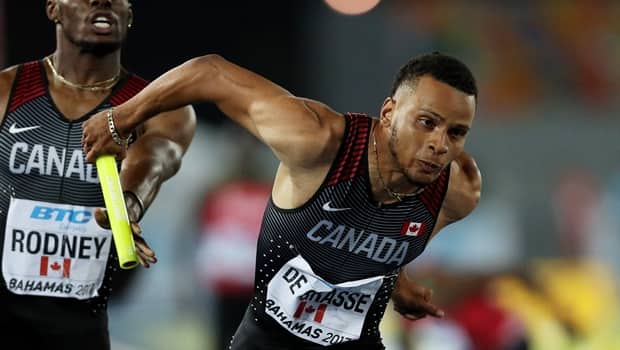 Few sprinters have ever burst onto the world stage like Canadian speedster Andre De Grasse.

After winning a pair of bronze medals at the 2015 world championships as a 20-year-old, De Grasse cemented his status as a rising star with three podium finishes at the Rio Olympics — in the 100, 200 and 4x100 — all the while cultivating a budding friendship and rivalry with Jamaican legend Usain Bolt.

The months since have been a dizzying global adventure for De Grasse, on and off the track.

Last weekend, he helped his Canadian team to 4x200 gold at the IAAF World Relays in the Bahamas. 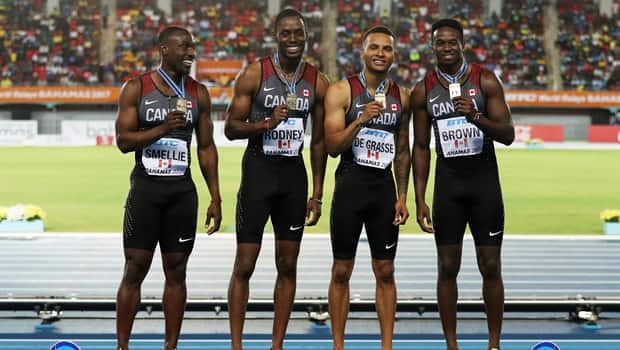 This summer, he'll get what could be his final chance to dethrone Bolt, who says he will compete for the final time at the world championships in London.

But first, De Grasse appeared this week at a downtown Toronto hotel's rooftop restaurant for the launch of a new fashion magazine. He's on the cover of the inaugural issue.

CBC Sports' Jamie Strashin caught up with one of the busiest and fastest men in sports for a quick Q&A.

Some people who have watched you for a long time thought you looked a little bigger, more muscular at the World Relays this past weekend. Are you doing anything different?

Andre De Grasse: Yes, I am a little bit. That's a nice compliment, by the way. I want to get a little bit more muscular. I've been getting in the weight room about three or four times a week, but now as the season progresses we're going to cut it down to one or two times a week.

Given the success you've had, how open are you to tweaks and changes to your training regimen?

ADG: I've been trying to be the same as last year, just a little bit better — my nutrition, supplements, things like that. Then hopefully I can upgrade those medals.

You don't want to be the guy who takes the wrong supplement. How careful do you have to be and what do you do to take precautions?

ADG: I'm very careful. Anything I do, if I take supplements, I always go throughout my coaches, my staff. I always look it up on the websites to see if it's good or not and then of course they have to be NSF certified. If it it isn't, I don't take it. I have to take the responsibility for myself to make sure I don't come up with a positive test.

Has there been a moment or experience since Rio where you've said to yourself, 'I can't believe this?'

ADG: After the Olympic Games a lot of people would recognize me in different countries. And I was like, wow, I'm actually known in these places. I was known in Canada but I never imagined it would be the same across Europe, across the Caribbean. I thought that was pretty cool, to get that type of buzz.

Did you feel that, after the Olympics, you had a relatively small window to capitalize on sponsorships and things like that? (De Grasse signed a multi-year deal with Puma worth more than $11 million US in late 2015.)

ADG: Yes, but I also thought finishing my degree was more important. I made a promise to my mom, my family, my coaches, that I would finish my degree at USC. And when people saw me on campus they were excited, they helped me get caught up school work. It was amazing. The four months went by so quick. I still got to do a lot of things — as you can see, I'm at this magazine launch, having a lot of fun. So I don't think I missed out on a lot.

Looking at your Twitter feed, you seem to have taken on a few new sponsors lately. Tell me about some you've said no to and why.

ADG: I've probably said no to 70 to 80 per cent of the opportunities. I always want to capitalize on the Canadian deals because I'm from here, and you can't turn down a global sponsor. I think I've made good decisions so far.

Is there a cause that you plan to use your newfound fame to try and champion, beyond sponsorships and things like that?

ADG: I want to try and inspire a whole new generation. Anytime I come back to Toronto, I always try and get out in the community and work with kids, show appreciation. But I've been working with my advisors trying to come up with a plan to say exactly what I want to do. After this year, 2018 will be an off year and I'll have more time to get that done.