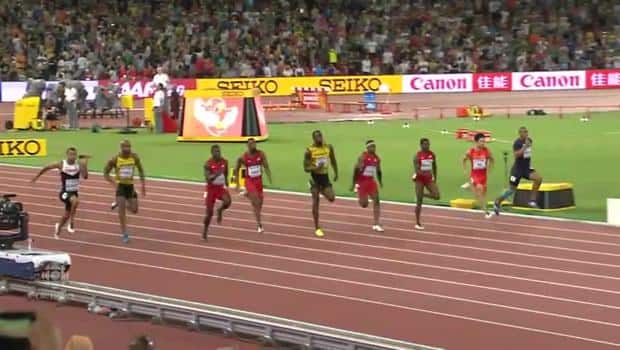 Bolt ran 9.79 seconds to edge Gatlin (9.80), who many believed would unseat Bolt as the world champion after the Jamaican star struggled for much of the season while the American ran the world's best times.

That storyline persisted right up until just two hours before this final, as Bolt stumbled to a 9.96 in the semifinals, matching De Grasse atop the heat, while Gatlin blazed to a 9.77.

But, as usual, the two-time and reigning Olympic 100m champ saved his best race of the season for when it mattered most, winning his third 100m world title and second in a row.

"A lot of people counted me out. So for me to come and win, this is a big deal," Bolt, 29, said after his latest triumph at the Bird's Nest stadium where he became a star by dominating the sprint events at the 2008 Olympics.

De Grasse, only 20 years old and competing in his first world championships, shared the bronze with American Trayvon Bromell in a photo finish that saw both men run 9.92, a personal best for the Canadian.

It's Canada's first medal in the 100 at worlds since Bruny Surin's silver in 1999 in Seville.

"I didn't know you could actually tie for a bronze medal, so I didn't know if they were going to give it to Bromell or me," De Grasse said. "I'm really happy for him, and I'm proud of myself. To race against these guys and make the final, I couldn't end the season any better than that."

Despite drawing the disadvantageous Lane 9 for the nine-man final, De Grasse said he was emboldened after matching Bolt in the semis.

"I had a lot of confidence after the semifinals, seeing myself that close to Bolt, that boosted my confidence a lot for the finals," De Grasse said. "My coach [Caryl Smith-Gilbert] told me 'This is your chance right now to go get a medal, and just go with them.' I'll go with them, they'll take me with them."

A slightly built native of Markham, Ont., just outside Toronto, De Grasse has emerged this season as one of the brightest young stars on the international sprinting scene. He won the 100m and 200m titles at the NCAA (U.S. collegiate) championships, and followed with gold in those events at the Pan Am Games last month in Toronto, where he set the national 200 record.

"The future looks bright," De Grasse said. "Next year I can't wait to see what kind of training I'm going to do, and I can only get stronger from here. It's only my third year in track and to be on the podium with these guys, it's incredible right now."

Earlier Sunday, Brianne Theisen-Eaton won a silver medal in the women's heptathlon and Ben Thorne got bronze in the men's race walk, giving Canada a three-medal haul on Day 2 of competition.

That's more than half of Canada's five-medal total from the last track and field world championships, held in 2013 in Moscow.