Canadian triathlete Amélie Kretz is ready to show off all the improvements she has made as she eyes the Tokyo Olympics.

Determined to make it to the top, Amélie Kretz is ready to show off all the improvements she has made during quarantine.

Having raced in Rio, the triathlete figures she would have already competed in Tokyo if not for the global pandemic. But as the Summer Games have been pushed back, and pools and gyms have shut down, the Sainte-Agathe-des-Monts, Que., native has been forced to come up with alternate methods of training.

With few options, Kretz decided to build a pool in her parent's garage; she credits it for helping to keep her in shape, while simultaneously improving her technique.

"I was actually in Australia when the pandemic first started; I came back home to Montreal mid-March," Kretz told CBC Sports. "After two weeks of just doing elastic bands in my home gym, I got really sick of it and wanted to find a way to get back into the water.

"I knew the pools were going to be closed for a long time. So, I bought one online for $300 with a plan to build it in my parents garage." Happily, she says, her folks agreed. "I had an elastic around my hips tied to the garage rail, so I could swim on the spot. It was a good way for me to maintain my swim fitness and work on some different technical skills."

'I've been the healthiest I've been in my career'

Although Kretz enjoyed the time off to improve her all-around game, it came with mixed emotions. The 26-year-old has dealt with several injuries throughout her career. In 2020, however, she was finally starting to overcome these difficulties but COVID-19 hasn't made it easy to find races.

"I've been the healthiest I've been in my career so far. In the last two and a half years, I switched coaches at the end of 2018 after another injury," Kretz said. "I've been healthy since we adapted my training around my needs as an athlete.

While the pandemic shut down Kretz's goal of competing in the Olympics this year, it has allowed her to work on improving the technical aspects of her game that she didn't plan to address until after Tokyo. 6 months ago
0:36
Olympic triathlete Amélie Kretz built her own endless pool in her parent's garage in Sainte-Thérèse, Que., so she could continue to train during the COVID-19 lockdown. 0:36

Now, with her training back on, Kretz believes she is better than she was back in March. An early test came this past Sunday, with her second place finish at the Canadian triathlon championship. She completed the race in two hours three minutes and 42 seconds—just shy of first place finisher Tamara Jewett's time of 2:01:42.

With one race down, the clock is ticking to qualify for the Tokyo Olympics.

Even though she doesn't have a spot locked in yet, Kretz remains confident that she will qualify. 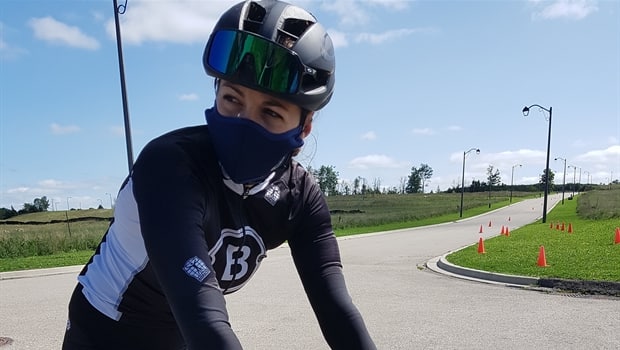 18 days ago
1:36
Canadian triathlete Amelie Kretz made sure that she got her training in during the COVID-19 pandemic as she continued her push towards qualifying for the Tokyo Olympics. 1:36

"We still have to qualify for the mixed team relay for Canada as it will make its debut in Tokyo. We only have one individual spot right now for the individual women's race. We need to get two spots secured to get the relay, I think my chances are pretty good," Kretz said. "Especially at my fitness level. I am in the best form I have been in like five or six years. I'm pretty confident I will make it to Tokyo and I will have a really good shot at having a great result."

Yet, the goal for Kretz is not just to qualify for the Games but to earn a podium finish. She believes she has the skill-set to do just that after the improvements she made during quarantine.

"To medal at the Olympics you need to be good all around. You can't hide anymore. You have to be a really good swimmer, strong technical rider, and you need to be the fastest runner," says Kretz. "There is always room for improvement."