The juggernaut led by Simone Biles keeps right on rolling, kidney stone or no kidney stone. The U.S. women's gymnastics team cruised to a gold medal at the world gymnastics championships on Tuesday, extending a run of dominance that only seems to be picking up momentum.

Relaxed, relieved and with the gold medal the U.S. women's gymnastics team flew halfway across the globe for secured, Morgan Hurd needed a break. So the 17-year-old hopped on the back of Simone Biles and went for a brief ride, the two teammates laughing all the way.

While the scene lent itself to an easy metaphor, that's not the reality.

Sure, having the best gymnast on the planet tends to help while putting together a dynasty. Except the United States' dominance in the sport — one that shows no signs of ending after the Americans won the world championship by a record 8.766 points on Tuesday — goes far deeper than its 21-year-old superstar.

It's 15-year-old Kara Eaker gracefully drilling her balance beam routine in her first major international meet. It's 17-year-old Riley McCusker proving high performance co-ordinator Tom Forster's hunch correct by being rock steady on beam after a shaking performance in qualifying. It's Grace McCallum celebrating her 16th birthday by coming through on floor and vault. It's Hurd posting top-five scores on vault and uneven bars on a day the U.S. put up the top overall scores by at least a full point in each of the four events.

The faces Biles shared the podium with at the 2016 Olympics are gone. And yet the machine rolls on. 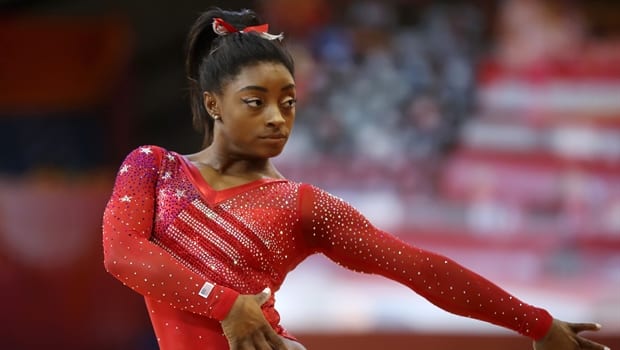 "It shows how strong the group of girls are and how strong Team USA is," Biles said after collecting the 15th world championship medal of her career despite dealing with pain from a kidney stone. "I feel like anything you guys throw at us we'll try and work even harder to improve ourselves and our scores for the team."

The U.S. put up a total of 171.629 to win its fourth straight world title and secure a spot at the 2020 Olympics. Silver medallist Russia and bronze medallist China also locked up Olympic berths by reaching the podium during a taut but occasionally sloppy final that showcased increased parity in the sport, at least for the teams that don't have the stars-and-stripes on their leotards.

Canada backed its surprising fourth in qualifying to finish a close fourth behind the Chinese. The Canadian team, composed of Ellie Black of Halifax, Sophie Marois of Ile Bizard, Que., Brooklyn Moors of Cambridge, Ont., Shallon Olsen of Surrey, B.C., and Ana Padurariu of Whitby, Ont. scored a total of 161.644 over the four apparatus. 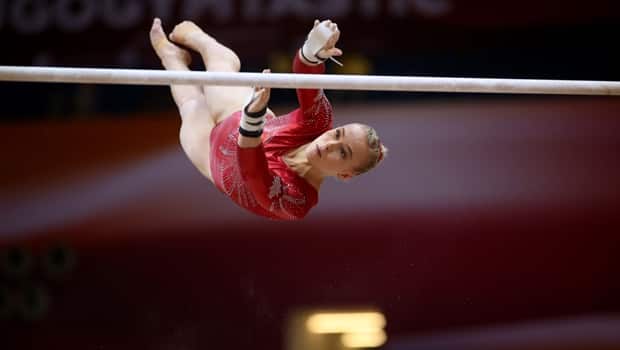 2 years agoVideo
2:02
The Canadian women finished fourth in the team final at the artistic gymnastics world championships on Tuesday. 2:02

"I'm so proud of the girls today," Black said. "They went out and did their jobs — we had a few mistakes, but there were so many positives, so many good parts of the day.

"We ended up making history coming fourth as a team in team finals — our best-ever result, and we couldn't be more happy with that. I think we represented Canada just the way we like to — with a smile, and aggression, and never giving up."

The gap between Russia and eighth-place Germany was all of 3.43 points, less than half of the margin between first and second. The Russians didn't lock up silver until the final routine on the final rotation. By then, gold was already well in hand for the Americans, just as it has been since their winning streak began seven years ago. 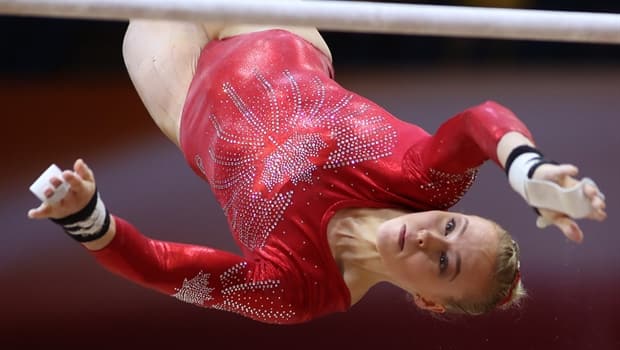 Not bad for a group that Biles said had a terrible warmup session before making its way into the half-filled Aspire Dome. Then the lights came on and the U.S. did what it has done in all four hemispheres of the planet — from Tokyo to London to China to Brazil — for the better part of a decade: It made the impossibly difficult look remarkably easy.

The Americans weren't perfect, even Biles. She looked downright angry after a beam routine in which she briefly lost her balance while trying to land a front pike, forcing her to reach down and hold on. She later stepped out of bounds during her first tumbling pass on floor exercise, a byproduct of her explosive power.

Yet they're mistakes Biles and the rest of the U.S. can absorb without fear of getting caught. It's simple math. The Americans put together the toughest routines and then do them cleaner than everyone else.

It's why Forster can afford to put McCusker on beam over Hurd in the final even though Hurd scored higher during qualifying. Even if McCusker had imploded, the team still would have been fine. Only she didn't. Her score of 13.7 on Tuesday was markedly better and the boost to her confidence immeasurable.

"It meant a lot to me because I knew my first-day performance was not my best," McCusker said. "I was definitely very nervous going in. I feel like I got all those nerves out on the competition stage. I was ready to come in today and kill it."

So she did. And that's kind of what Forster was going for. Tasked with helping create a more positive culture within the organization, Forster wanted to send a message to the rest of the elite program by giving McCusker another opportunity.

"We don't write you off if you have a mistake," Forster said. "Mistakes happen, we're just human."

Forster, hired in June, joked he's finally going to get a chance to sleep through the night. The same goes for the team, though the Americans will be plenty busy over the next few days. Three of the five women will be in at least one event final. Biles, nearly a year removed since she returned to training, will have the heaviest workload of all. She'll be in the all-around final and all four event finals.

Medals in each — Biles finished first in qualifying in everything but bars, where she was second — would give her 20 in her career at world championships, tying the record for most ever. After that she might take a breath, though she has no plans to coast until the 2020 Tokyo Games. Neither do her teammates.

"Definitely not slack off," she said. "But it'll definitely put our minds at ease."

While the rest of the world remains on notice.