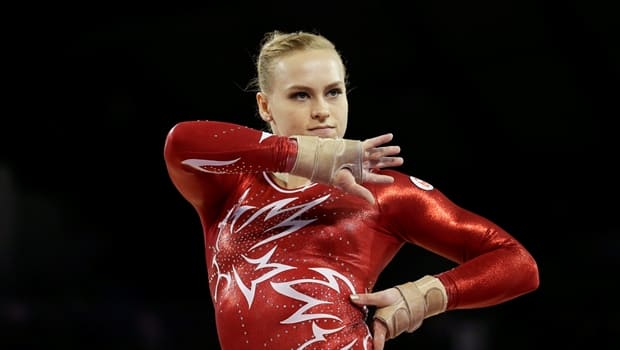 A year after finishing second at the Canadian Championships, Ellie Black is back where she wants to be.

The Halifax native regained her senior all-around title on Saturday at the 2017 Canadian Championships in Artistic Gymnastics in Montreal. The victory is Black's fourth Canadian championship.

"My goal today was just to compete, stay healthy and have some fun out there," Black said in a release following the award ceremony. "It's nice to be back with the girls again and to build some excitement in the building. I've enjoyed the whole experience and I'm so happy to be healthy and back competing."

In the senior men's competition, Zachary Clay of Chilliwack, B.C. won his first ever Canadian title. He finished with 81.750 points. A senior for five previous years, Clay defeated defending champion Jackson Payne, who won silver with 79.400.

"This is the best feeling ever, no words can describe how I feel right now," Clay said in a release. "I wasn't expecting to come first, I was just aiming for the podium but everything just came together today. I was in the zone and focused on what I had to do to win and am happy with the results."

Ana Padurariu won the female junior all-around Canadian championship with an overall score of 55.267 while Evgeny Siminiuc won the junior men's 14-15 competition with a score of 99.000 points.

Don't miss more of the Canadian Artistic Gymnastics Championships from Montreal on Sunday, starting at 2 p.m. ET on CBCSports.ca.

More than 500 artistic gymnastics athletes from across Canada are sharing the floor at the Claude-Robillard Sports Complex as they aim to secure their place representing their country at the world championships in Montreal in October.