Ana Padurariu​ captured Canada's second medal of the world gymnastics championships on Saturday in in Doha, Qatar. The 16-year-old from Whitby, Ont., earned a silver medal in the balance beam final.

"This is unbelievable, I'm still trying to believe it right now," Padurariu said. "It paid off. These weeks have been a roller coaster, but it ended on a good note, and that's all I can ask for." 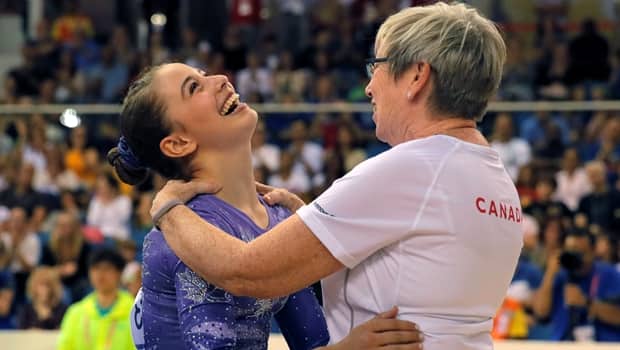 2 years agoVideo
3:28
The 16-year-old from Whitby, Ont., earned a silver medal in the balance beam final at the 2018 Artistic Gymnastics World Championships in Doha. 3:28

Ellie Black, of Halifax, scored 13.033 to place fifth in the event.

Biles also won the floor exercise (14.933) at the world gymnastics championships on Saturday, wrapping up a remarkable meet in which she competed while battling a kidney stone.

The Olympic champion won six medals in all at the Aspire Dome, including gold in the team final, the all-around and the vault to go with the bronze on beam as well as a silver medal on uneven bars.

Biles now has 20 career world championships medals, tied with Svetlana Khorkina of Russia for the most by a female gymnast.

Brooklyn Moors of Cambridge, Ont., was the lone Canadian in the floor finals, finishing eighth (13.066).

On Tuesday, Moors was part of the best-ever women's result by a Canadian team at the artistic gymnastics world championships, placing fourth with Sophie Marois, Olsen, Black and Padurariu.

Next for Canada is the trampoline gymnastics world championships, starting Nov. 7 in St. Petersburg, Russia.