Paddle, paddle, shoot: Everything you need to know about canoe polo

Get to know the sport of canoe polo — which is actually played in kayaks — as the world championships play out this week in Welland, Ont.,

Watch the 2018 world championships on CBCSports.ca from Welland, Ont.

First things first: canoe polo could maybe use a rebrand.

Because it's called canoe polo, it's easy to assume the sport is played by athletes in canoes.

In fact, it's played in kayaks.

Everything you need to know about canoe polo: 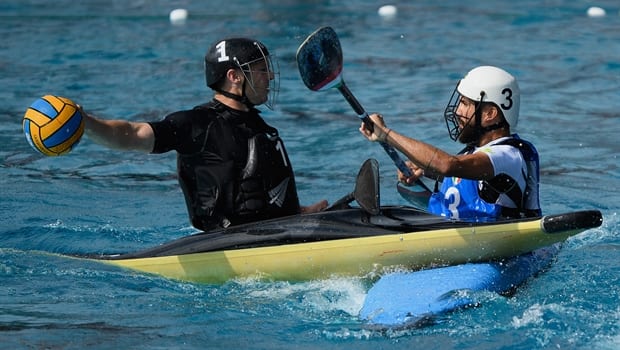 What the heck is canoe polo?

Don't be alarmed; in some European countries, but mainly the United Kingdom, the term canoe can also refer to a kayak. Hence, canoe polo.

Here's everything you need to know about canoe polo.

The sport is played with five players per side over two 10-minute halves. If the game is tied after 20 minutes, sudden-death overtime comes into effect.

Each team's objective is to score into the opposing team's net, which is suspended two feet above the water. Each player can only hold the ball, which is the same ball as used in water polo, for a total of five seconds before either passing, shooting or dribbling (dropping the ball in the water).

There is also a 60-second shot clock. Passes can be made either by hand or by flicking the paddle at the ball toward a teammate. One of the five players on the water acts as the goalie, using his or her paddle to make saves.

Canoe polo is also a full-contact sport, which means you can expect to see high-speed kayak collisions.

Where did it come from?

Canoe polo was born in the U.K. in 1970, and is now included in the programme for the World Games (international competition of non-Olympic sports) every four years.

Outside of the World Games, canoe polo holds world championships every two years with regional championships taking place during the intervening years.

The Canadian senior women qualified for the most recent international competition at the World Games in Wroclaw, Poland, in 2017 where they finished sixth. The men didn't qualify.

Catherine O'Brien is the longest-serving member of the senior women's team, having competed for Canada since its inaugural worlds appearance in 1996. In 2008, O'Brien was the tournament's top scorer as Canada placed 10th.

The men's team features Brant Oldershaw, whose father Mark won a bronze medal in canoe sprint at the 2012 London Olympics and was Canada's flag-bearer at the opening ceremony of the Pan-Am Games in 2015.

The men finished 18th at the previous world championships in 2016 in Syracuse, Italy. The men's U21 squad also finished 18th, while the women's U21 team placed sixth, the best finish for a Canadian team.

Internationally, Germany won both the women's and men's tournaments at the 2013 and 2017 World Games. The UK and France also typically boast strong teams, while New Zealand won the women's championship in 2016.

How do I watch?

The 2018 world championships tournament can be watched live on CBCSports.ca beginning Wednesday at 9 a.m. ET. The senior women's final goes at Sunday at 3:40 p.m. ET, while the men's final begins at 4:20 p.m. ET.

The full schedule for the tournament, including who Canada is grouped with and when they play, can be found here.