Can Penny Oleksiak avoid burning out?

The future looks bright for Penny Oleksiak, but swimming prodigies are always at risk of burning out. That's why the people around the Canadian teenage sensation are making sure she leads as normal a life as possible.

The tragic arc of Elaine Tanner saw her go from breakout star to disappointment, from instant athletic glory to decades of personal strife marked by depression, divorce, family estrangement and even, she says, thoughts of suicide.

After transforming from anonymous teenager to swimming superstar at the 1966 British Empire Games, Tanner's downfall began at the 1968 Olympics in Mexico City. The 17-year-old was expected, at least by the media of the day, to win a gold medal, but she came away with two silvers and a bronze.

"I was the first [Canadian] athlete to ever win three Olympic medals in one Games, and yet when I came back I was still thought of as a loser because none of them were gold," says Tanner, now in her 60s.

She would retire at only 18 years old and tumble into years of personal challenges that she has chronicled on her website and in a recent piece for CBC Sports.

It's a cautionary tale, and one that Swimming Canada and the family of Penny Oleksiak are trying to ensure won't repeat itself with the country's latest teenage swimming sensation.

Tanner and Oleksiak are each among the greatest Canadian athletes of their respective generation, shocking the world nearly a half-century apart.

In August 1966, a 15-year-old Tanner represented Canada at the British Empire Games — what we now call the Commonwealth Games — in Kingston, Jamaica.

Untested on the world stage and nicknamed "Mighty Mouse" for her smaller stature, Tanner won four gold medals (the first female to do so) and added three silvers while setting world records in two events.

Tanner captured the attention of the Commonwealth media. Photographers would set up their cameras behind her lane before each swim.

She then went on to star at the 1967 Pan Am Games in Winnipeg, where she won five medals, including a pair of gold.

Swimmer Elaine 'Mighty Mouse' Tanner at the 1967 Pan Am Games

1 year agoVideo
4:14
The Canadian competes in the 100-metre butterfly and praises the swimming pool Winnipeg built for the Games. 4:14

"I think Penny was basically in the same shoes that I was in," says Tanner, comparing her sudden rise to Oleksiak's experience last summer.

At the 2016 Rio Games, the then 16-year-old Oleksiak came out of nowhere to capture four medals — the most ever for a Canadian at a Summer Olympics — including a gold in the 100-metre freestyle in Olympic-record time.

It was an astounding performance — especially considering that, the previous summer, when the Pan American Games were held in her hometown of Toronto, Oleksiak wasn't even on the team. The Rio Olympics were her first senior international competition.

First-time success like that almost never happens, but Tanner and Oleksiak defied the odds.

So how does Oleksiak move onward, now that she's an Olympic champion and it's no longer a secret what she can do? At her age, she could reasonably qualify for at least another two Olympic Games, if she's up for it.

For now, though, that's all down the road. Oleksiak's immediate challenge is this year's ultimate competition for aquatic sports — the FINA World Championships in Budapest, Hungary, where swimming competition takes place July 23-30.

It's incredible to think, but this will be Oleksiak's first senior world championships in a long-course pool. She's expecting tough competition.

"I feel like Budapest is going to be faster than even the Olympics," says Oleksiak.

In light of that, during training she's been working on what swimmers call their "front-end speed" to complement her impressive ability to finish races.

Outside of the pool, the additional demands around Oleksiak have been ratcheted up to potentially distracting levels.

At the short course swimming world championships, held in Windsor, Ont., last December, young fans would sprint down the stairs of the venue to catch her for an autograph after her races. Dripping wet and tired, she'd sign them all. And she still managed to shine in the pool, winning four medals, including two relay gold. 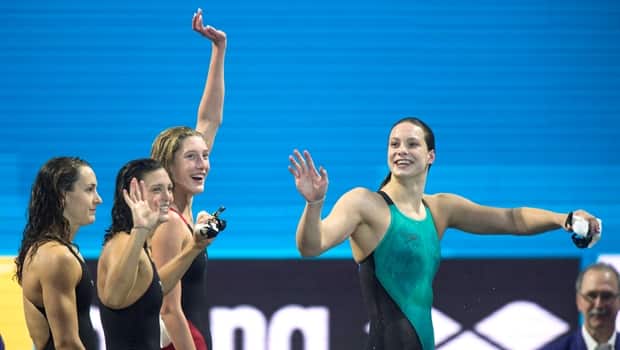 She's now represented by an agent and recently announced partnerships with Asics and RBC Royal Bank.

Oleksiak is a young, star athlete with a now sizable social media following and a potentially long career. Although Olympians are not the most visible of all athletes, she offers an enticing option for various brands' marketing efforts.

However, it's important to remember that the reason for Oleksiak's financial gain and relative celebrity is her performances in the water.

Swimming medals typically come from great training and preparation — something her coaches and support staff are fervently protecting.

"She needs something that doesn't change, and for me that's the swimming and the training," says her coach, Ben Titley. "If that can be the place that she's comfortable, if that can be the place where she knows she's going to be treated the same, as opposed to maybe by her friends at school or people she meets on the street, then at least it can be a comfortable place."

With so many high-school-aged athletes on its hands, Swimming Canada hired a full-time team manager, Alexandra Ruyter, who also tutors and coordinates with other support staff.

"They certainly have quite a bit going on in their life that can be tough to balance," says Ruyter, an educated teacher with a Master's degree.

The team of support staff also include a sport biomechanist, a nutritionist and a paramedical manager. They work out of the Canadian Sport Institute Ontario, inside the Toronto Pan Am Sports Centre, where Oleksiak trains.

But Swimming Canada hasn't tinkered too much with what brought Oleksiak so much success in the first place. They recognize that the biggest shifts in her life may in fact be outside of the pool, or in Oleksiak's own outlook on success.

"It's about keeping it normalized and about process and talking about what [swimmers] can do to reduce the pressure of expectation from within the team," says John Atkinson, the high performance director for Swimming Canada.

"They still create their own pressure and expectation personally. They don't need me adding to that."

If Titley, Atkinson and the support staff design what happens at the pool, Oleksiak's parents, Alison and Richard, play a big role in everything outside of it.

Alison Oleksiak says they have four areas which demand most of their attention: school, swimming, friends and family, plus a combination of media, sponsor, and charity requests.

They are hawkish when trying to achieve balance, and Alison admits to being afraid of burnout for Penny.

"It's more about her mental health and her well-being," says Alison.

She also says they learned a lot from raising Penny's older brother, Jamie, who was a first-round NHL draft pick as a teenager and now plays for the Dallas Stars.

"There's a tendency to think you have to do things right now, and take advantage of every opportunity right now, I would say that we definitely didn't follow that path," says Alison.

"We have to trust that this is going to be a long journey for her so you don't have to do everything now."

This season Penny skipped a stop in the Arena Pro Swim Series because Alison says it conflicted with finals at school. Penny prefers attending a regular school and going to class over online study, so she does a blend.

In the fall she plans to go to Kenya with ME to WE organization to help build a school, even though it conflicts with the start of the swim season.

"Her world is not just about one thing," says Alison, "She's much more than just a swimmer."

Alison says Penny went to multiple proms, and gets plenty of time with her friends.

"Lately I've had to do a lot of media stuff with swimming, so I always tell my parents I'm doing so much work right now, like I need to just hang out with friends," says Oleksiak.

"They're very understanding with that."

Later in the summer of 2016, Tanner and Oleksiak met for the first time at a community parade for Rio Olympians in Toronto's Beaches neighbourhood. Tanner was invited as a guest of honour.

On that day the two swimming greats posed together for a photo. In it, Oleksiak is grinning and a full head taller than a smiling Mighty Mouse.

"Penny strikes me as who I was back at 16. She doesn't want all this stuff," says Tanner, referring to the extra noise around a successful athlete. "Penny just wants to be Penny."

And it seems that, even after a year of heightened publicity, endorsements and training demands, Oleksiak has kept her nonchalant nature.

"I hope that she maintains that until 2020, that she keeps a solid footing and she can balance it," Tanner says.

"I just really hope she swims for Penny, and nobody else."