Olympic champion Penny Oleksiak and world champion backstroker Kylie Masse will lead Canada's swim team into the 2018 Commonwealth Games in Australia. Ten of the 26 athletes named by Swimming Canada are under the age of 20.

Young team preparing for 'critical' event ahead of 2020 Olympics

Toronto's Oleksiak won four medals at last year's Summer Olympics in Rio, including gold in the women's 100-metre freestyle and silver in the 100-metre butterfly.

Masse, of LaSalle, Ont., set a world record in the women's 100-metre backstroke en route to gold in Budapest in July. 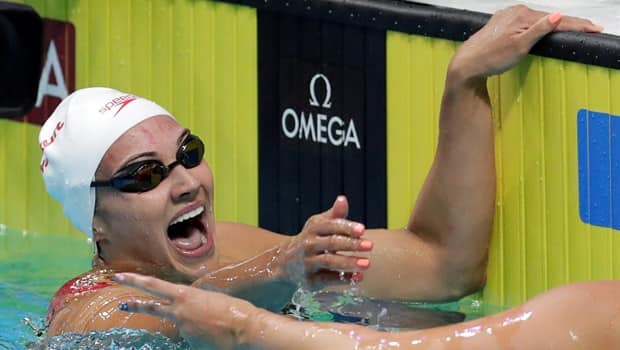 The Commonwealth Games will be held April 4-15 in Gold Coast, Australia.

Ten of the 26 athletes announced Tuesday by Swimming Canada are under the age of 20, including 17-year-old Oleksiak.

"This is a young, yet dynamic and strong team of athletes who have proven they can perform under some of the most intense pressure at major international meets," Swimming Canada high-performance director John Atkinson said in a statement.

"This event will be another critical benchmark and measuring stick for our team as we continue to build towards the 2020 Olympic Summer Games.

"It will provide our top athletes with another major test, while giving our rookies additional international race experience in a Games environment which will serve us well in the pursuit of our goals in 2020."

Here is the full roster for Canada's swim team heading to the upcoming Commonwealth Games: