Penny Oleksiak followed up her 2016 Olympic victory with a sixth-place finish in a stacked women's 100-metre freestyle final at the world aquatics championships on Friday in Budapest. Later, she beat her own Canadian mark in the 50 butterfly semifinal.

Canadian swimmer Penny Oleksiak followed up her 2016 Olympic victory with a sixth-place finish in a stacked women's 100-metre freestyle final at the world aquatics championships in Budapest on Friday.

The 17-year-old Oleksiak touched the wall in a season-best 52.94 seconds, faster than her qualifying time of 53.05 but short of her Olympic record 52.70 last August in Rio de Janeiro, where she tied American Simone Manuel for top spot.

"It hurt a lot the last 20 metres, but overall it was a pretty good race," Oleksiak told reporters. "I've had kind of a difficult year, so I think being able to get around my best [time] was pretty good."

"One being she knows that her prep was less than ideal for the [Canadian] trials in April," he said. "With only a couple of months of 'usual' prep, she was able to get near the best times.

"Being sixth is still in the hunt. There is lots of time before the Tokyo Olympics in July 2020."

Later Friday, Oleksiak improved her own Canadian record in the 50 butterfly at Duna Arena, stopping the clock in 25.66 to qualify fourth for the final. Her old mark was 25.76, set last month at the Mare Nostrum event in Barcelona.

"It felt pretty good," Oleksiak said. "I think I have to be more playful and fun going into the 50 fly. All my other events I take super seriously and have a whole plan going into them, but the [50 fly] is one you put your head down and try to get to the wall first."

'Biggest upset of the meet'

Meanwhile, Manuel scored an upset in Friday's 100 free, overcoming Swedish sensation Sarah Sjostrom in the final 25 metres to win in a personal-best 52.27, edging Sjostrom by just four-hundredths of a second.

Sjostrom jumped out to a quick lead and was under her own world-record pace when she made the flip, with Manuel in third. But the 20-year-old Texan stormed from behind on the return lap, steadily closing the gap until she caught the leader on the very last stroke. 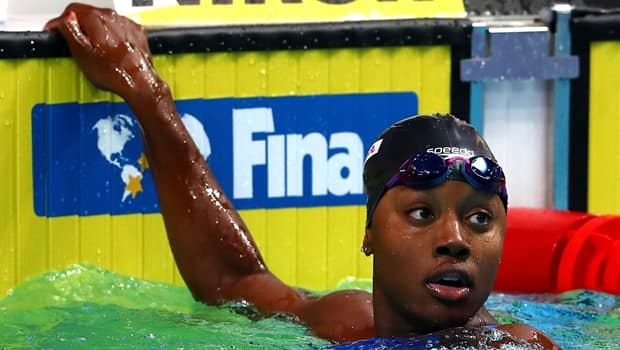 "To me," said MacDonald, "that is the biggest upset of the meet, so far. And it's really all on Sjostrom's inability to deliver. Kudos to Manuel for improving a half-second from last year's [Olympic] final in Rio.

"Sjostrom has not had a grueling schedule like she did in Rio, where she raced about 17 times. She was fresh, and that was all part of her new plan, to use her natural speed to dominate."

MacDonald noted Sjostrom and her new coach need to work on improving the swimmer's stamina.

"Don't count her out," he added. "She is so naturally fast that I would say, even after this upset, she will be the one to beat for gold in Tokyo."

Earlier this week, Sjostrom became the first woman to dip under 52 seconds, posting a time of 51.71 in the 4x100 relay, but is still seeking her first world title in the free.

On Thursday, Oleksiak qualified sixth for the final, thanks to a strong push in the final 50 metres that allowed the four-time Olympic champion to finish third in her heat in 53.05. She turned in a similar performance at the Canadian trials in April when Oleksiak was fourth at the 50m mark before stepping up over the final 25 metres to win in 53.84 in Victoria.

MacDonald said Oleksiak, who "arrived" on the international scene last summer, hasn't had time to grow into her six-foot-one frame. 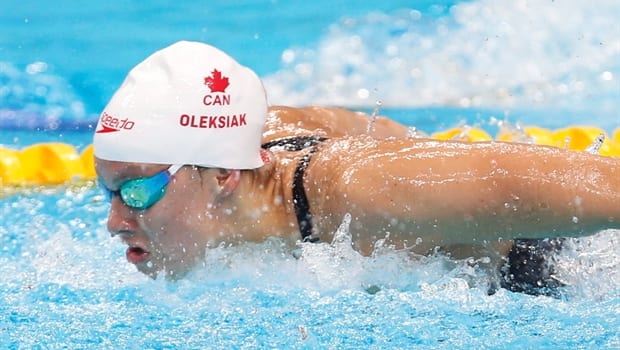 3 years agoVideo
1:40
Oleksiak improved her own Canadian record in the 50m butterfly semifinals, stopping the clock in 25.66 seconds to qualify fourth for the final. 1:40

"She is always the last one to the halfway mark [in the 100 free], likely in part due to not having the ability to generate the power of the other women who are much older and more physically mature. That will come. She is in very good hands with her coach Ben Titley at the National Centre in Toronto."

Earlier this week, Oleksiak was fourth in the women's 100 fly and a member of the mixed 4x100 medley relay team that won bronze. The Toronto native also placed fourth with Chantal Van Landeghem, Sandrine Mainville and Kayla Sanchez in the 4x100 free relay final.

Masse finished second in her heat in a Canadian record time of two minutes 5.97 seconds while Caldwell , who held the lead at the 100 and 150-metre turns, was fifth in the first of two heats in 2:07.64, just 0.10 seconds off her Olympic bronze medal time in Rio. 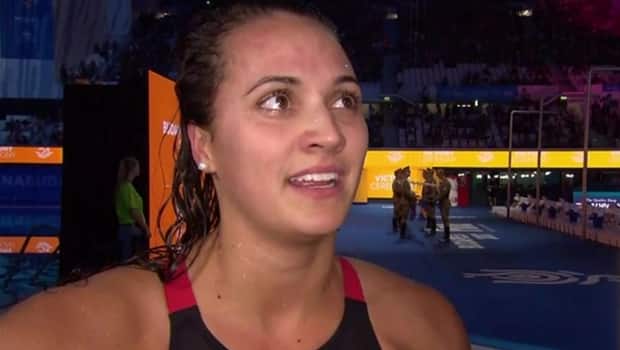 3 years agoVideo
0:42
The LaSalle, Ontario native broke the Canadian record in the women's 200m backstroke semifinals Friday with a time of 2:09:57, at the FINA World Championships 0:42

"I knew it was going to be a tight finish," said the 21-year-old Masse, "but I did the best I could to get my hand on the wall as fast as possible."

Masse, who hails from LaSalle, Ont., also made history on Tuesday when she became a world champion and world record holder in the 100 backstroke.

"The 100 has always been more of my main focus," the University of Toronto student said, "but I've been working on the 200 more."

Vancouver's Kierra Smith placed fifth in the women's 200-metre breaststroke final in a time of two minutes 22.23 seconds, which shatters her personal best of 2:22.82 from the 2015 worlds in Kazan, Russia. But Smith wasn't satisfied with the result.

"It's great to get a best time, though," she said. "I can't tell you how bad I wanted a medal and I'm not sure what I could improve on looking back at it right now."