The 23-year-old from LaSalle, Ont., became the first Canadian to win back-to-back world championships gold medals when she defended her 100 backstroke title at the 2019 FINA World Championships in Gwangju, South Korea.

Masse has won every major 100-metre backstroke race she has entered since her bronze-medal performance at the Rio 2016 Olympic Games.

She won the event in a then-record time of 58.10 seconds at the 2017 world championships in Budapest, Hungary.

"It's always an honour," Masse said in a statement. "It's important for me to be proud and be happy with my success in the past but also continue to look forward and continue to work hard and see what I can improve on.

"I think it only gets harder. I will continue to push myself day in and day out to continue to improve myself."

Masse's road to 2020 Tokyo Games will begin with the Olympic and Paralympic Trials in April. 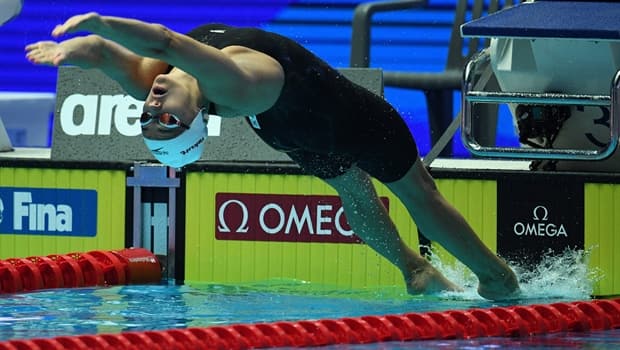 1 year agoVideo
2:39
Kylie Masse of Lasalle, Ont., became the first Canadian to win an event at the International Swimming League, when she won the women’s 200-metre backstroke with a personal best time of 2:01.89. 2:39
CBC's Journalistic Standards and Practices|About CBC Sports