Toronto and Tokyo will begin competing next season as new franchises in the International Swimming League (ISL), the professional league announced in Las Vegas on Saturday.

Teams will begin competing next season

The International Swimming League is expanding for its second season next year.

The pro league that featured over 100 Olympians will add teams in Tokyo and Toronto, bringing the number of clubs to 10. Five will comprise the Europe-Asia group with the other five in the U.S.

The season will begin in September, a month after the Tokyo Olympics end, and run until April 2021. There will be breaks in December and March for other events on the world swimming calendar.

A total of 27 matches — a minimum of 10 per club — will be held, including regular season, playoffs and the grand finale.

"If we want to be a league, we have to act like a league," said ISL managing director Andrea Di Nino, who promised an increase in prize money and the salary cap for each team. 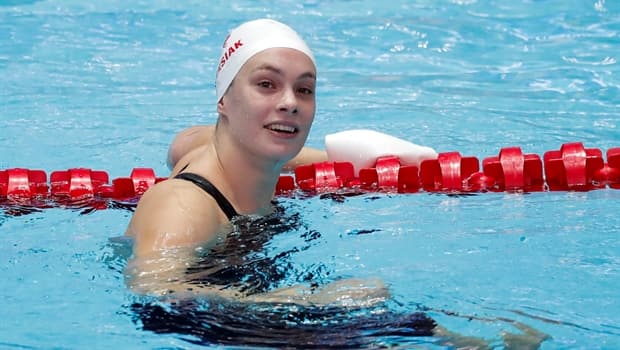 1 year agoVideo
4:36
Canada's Penny Oleksiak and Kayla Sanchez helps their team to victory on the final day of the ISL final. 4:36

The ISL held six meets in its first season and staged its grand finale in Las Vegas, where the expansion was announced Saturday. Europe-based Energy Standard won the championship and its 28 members split $100,000 US.

The 3,800-seat Mandalay Bay Events Center wasn't filled either day, although there were noticeably more people on Saturday for the music and spotlight-filled event featuring finals only over two hours.

"It was a great show for everybody," said Di Nino, who was open to the possibility of returning to Vegas for the finale. "Next year is going to be even better. Of course, we're looking to improve and look at our mistakes."

Retired four-time Olympic gold medallist Kosuke Kitajima will represent the Tokyo entry, which has yet to be named.

"I'm very happy to be given this big opportunity for swimming," Kitajima, who attended the finale, said through a translator. "When I was first approached about this opportunity I was very happy, but I was thinking why didn't you come to me in the beginning. I hope a lot of Japanese swimmers will be able to participate."

Daiya Seto was the only Japanese swimmer who competed in the ISL's first season, and he only swam the finale for winning Energy Standard. He set a world short-course record in the 400-meter individual medley on Friday, which was streamed live in Japan.

"Japan is one of the world's leading swimming nations with a large fan base, so we expect to see a very competitive team be developed there and many fans excited to learn of our plans," ISL founder Konstantin Grigorishin said in a statement.

13 Canadians swam in ISL this season

Robert Kent, an investment banker and former swimmer, will head the Toronto entry, which also has yet to be named.