Canada’s Penny Oleksiak couldn’t duplicate her stunning performance at the Rio Olympics, just missing the podium in the women's 100-metre butterfly at the world championships in Budapest, Hungary. Canada's Penny Oleksiak couldn't duplicate her stunning performance at the Rio Olympics, just missing the podium in the women's 100-metre butterfly at the world championships in Budapest, Hungary.

Oleksiak finished fourth with a time of 56.94 seconds. After a slow first half, Oleksiak picked up the pace but couldn't make up enough ground.

"I'm pretty happy with the race. I know there's stuff I can fix going forward. Overall I can't really complain, the race is over and I can't change anything," said Oleksiak.

"I'm not disappointed, this year's been kind of tough with injuries and everything. It's definitely not the best year I could've had, but considering the fact I could still come fourth at worlds I'm pretty happy."

Monday's race was a challenging one. Oleksiak set a Canadian record at 56.46 to win silver at Rio, yet that time wouldn't have even landed her on the podium in Budapest.

Swede Sarah Sjostrom, the favourite entering the race, won gold with a championship-record time of 55.53 seconds. Australian Emma McKeon took silver at 56.18 seconds, while American Kelsi Worrell edged out Oleksiak for bronze at 56.37.

"It felt like I was going a bit slower than I did yesterday actually, so maybe butterfly is about being all relaxed and then you can be even faster," said Sjostrom, who didn't look at all tired a day after racing four times on the opening day of swimming.

Like Oleksiak, University of Toronto coach and CBC Sports analyst Byron MacDonald isn't concerned with the Canadian's time or result. 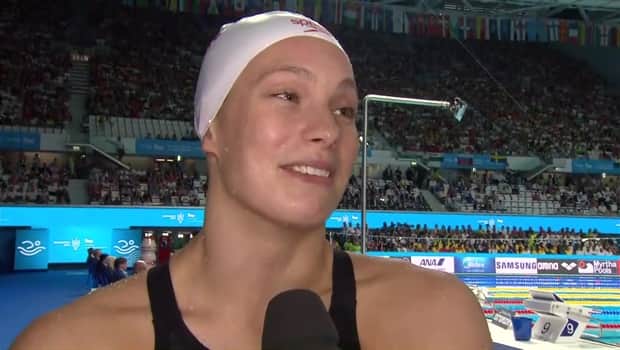 'I put everything I had into that race' : Penny Oleksiak on just missing the podium

"Penny being that close to her best time is fine," said MacDonald. "She has missed a ton of training/preparation [time] this season [considering] to her whirlwind fall. Being able to get fourth after all of that is fine.The point is to keep in touch with the leaders.

"She is doing that. For her, in my opinion, it is really all about the 2020 Tokyo Olympics. She does not really have to be ready for three more years."

On Sunday, Oleksiak and the rest of her Canadian teammates finished fourth in the women's 4x100 freestyle relay race, an event they won bronze in at the Rio Olympics.

Canadian Kylie Masse asserted herself as the 100-metre backstroke favourite, coming within 0.06 seconds of a world record in Monday's semifinal.

Canada's Kylie Masse swims 58.18 in the 100m backstroke, just short of a world record, and that's just in the semifinal 😲 <a href="https://t.co/EJOhVhXRFm">pic.twitter.com/EJOhVhXRFm</a>

Masse, who broke through with a bronze at the Rio Olympics in this event, finished first in her heat with a Canadian record time of 58.18 seconds and will head to the finals in the top spot.

"Every opportunity I get to race I give it my all because you never know. I think it didn't matter if it was prelims, semis or finals, I was just going to try my best. That's really all I had in mind," said Masse.

MacDonald, who coaches Masse, thinks his swimmer can break the world record in Tuesday's finals, and is definitely one of two favourites for gold.

"Yes [she can break the world record], though it's always easier to swim in a semi than it is in a final," said MacDonald. "Not so sure anyone but the American [Kathleen Baker] can come close to her." 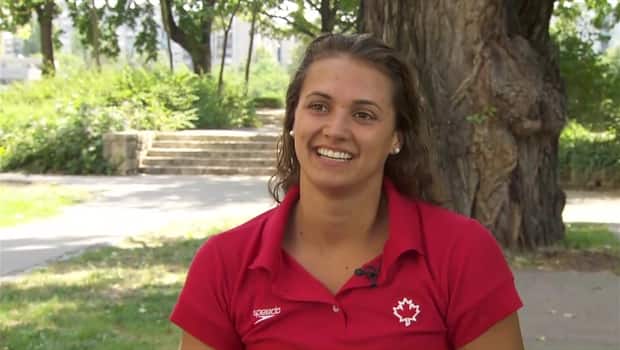 Kylie Masse on 100-metre backstroke: 'I know that world record time is there'

4 years agoVideo
2:46
The Canadian swimmer is a favourite in the 100-metre backstroke event at the FINA Aquatic World Championships in Budapest 2:46

Canadian Hilary Caldwell competed in the other heat, but missed the finals after finishing 12th overall at 1:00.29.

After setting a Canadian record in the semifinals, Sydney Pickrem, from Clearwater, B.C., exited the 200-metre individual medley final after just one length.

Pickrem, who finished sixth in the event at Rio, got off to a slow start before exiting the pool during her butterfly stroke. 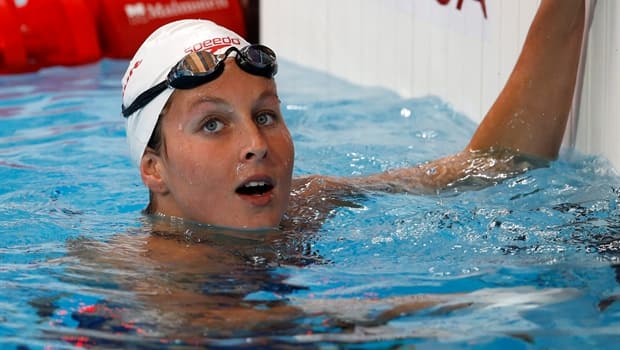 4 years agoVideo
2:35
Canada's Sydney Pickrem made an early exit after one length in the 200m Individual Medley final while Hungarian Katinka Hoszzu took the gold. 2:35

Swimming Canada tweeted after the race that Pickrem was fine, and was working with coaches. She left the pool after taking on — or swallowing — too much water at the 50-metre turn before hitting the wall, but did not suffer any injuries.

"Many swimmers will swallow some water when they swim," MacDonald explained. "But its usually just a small amount and the swimmer can still get the air they need. When it becomes an issue — and mostly it's in butterfly — is when you go to take in the air, and all you get is water. A lot of it.

"Due to the mechanics of butterfly, the breath in butterfly can be more susceptible to being slightly too low in the water and getting water instead of air on a breath." 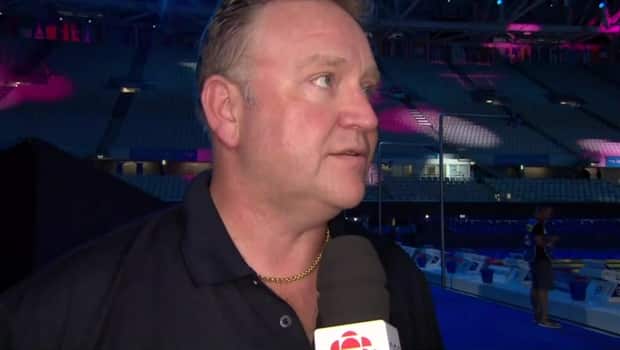 'She will learn from it' : Swimming Canada's John Atkinson on Sydney Pickrem's early exit

Kierra Smith of Kelowna, B.C., will  compete in Tuesday's 100 breastroke finals at Duna Arena. Known more for her performances in the 200 breaststroke, the 23-year-old swam a personal best to advance to her first international final in the 100 distance. Smith advanced in a tie for sixth position with a time of 1:06.62.

"I'm so excited," Smith said. "I'm really happy that the speed is getting there and I'm getting stronger.

Javier Acevedo of Scarborough, Ont., finished 14th in the men's 100-metre backstroke in 54.11. The 19-year-old moved up from 15th seed and improved on his 17th-place finish from Rio, where he just missed semifinals.

With files from Swimming Canada