Canada's rugby sevens teams are taking home medals from the 2019 Pan Am Games, but the real takeaway from Lima for both men's and women's teams is that the next generation of players are ready for big international events. And that's good news with the Tokyo Olympics looming.

LIMA, Peru — Canada's rugby sevens teams are taking home medals from the 2019 Pan Am Games, but only one team was able to defend the title they won on home soil at Toronto 2015.

Canada beat the U.S. 24-10 in the women's final, thanks to a hat-trick of tries from Toronto's Asia Hogan-Rochester, while Breanne Nicholas of Bienheim, Ont., added another and two conversions.

Captain Kayla Moleschi says couldn't have asked much more from her team, who only surrendered two tries all tournament.

"Our resilience all weekend was pretty incredible — keep chasing them back and putting them down, and get turnover. USA got two on us, but that's OK," she says with a laugh. 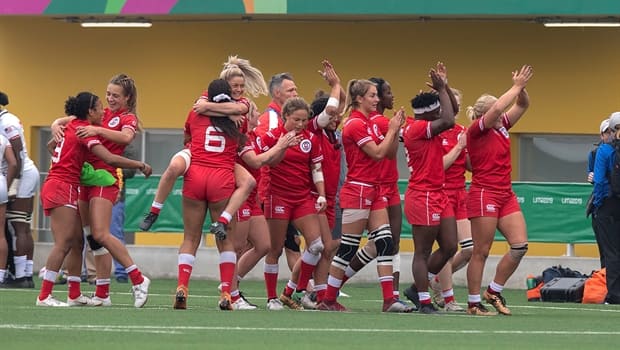 Toronto's Josiah Morra started the Canadian men off with a 5-0 lead in their gold-medal match but Argentina roared back with 21 unanswered first-half points on the way to a 33-10 victory.

Both squads that took to the pitch on an overcast day in Villa Maria de Triunfo looked quite a bit different than their 2015 counterparts. Only two women — Moleschi and Sara Kajulvee — and four men — Harry Jones, Nathan Hirayama, Sean Duke and Admir Cejvanovic — were back on the roster to defend their respective titles.

The men were missing Conor Braid and Justin Douglas from this Pan Am roster as they were injured during Series play this past season.

"I'm extremely proud," he says. "A lot of the young boys got a lot of the playing time this weekend, which is fantastic and I think they played awesome." 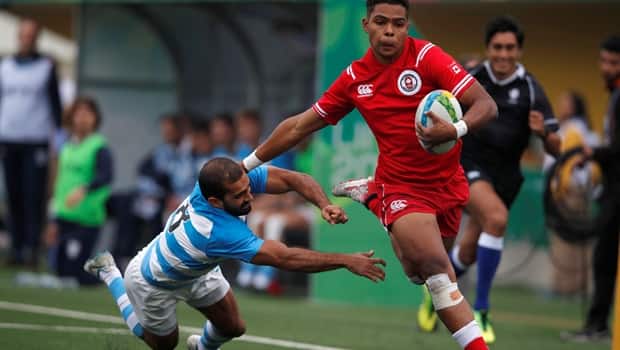 "We have to find people to fill those spots and when are they going to get that experience? Tournaments like this," Paul says. "We're trying to grow extra numbers and high-level events like this is where they learn."

The women were also without the services of veterans like Ghislaine Landry, Brittany Benn and Karen Paquin. Those are some big-time athletes, but Morgan Williams, head coach of the Canadian women's Pan Am team, says the results prove that the talent pool available to Canada runs deep.

"We're very happy with our depth and where we are. Of course we're not just sitting on our laurels, we're canvassing the county looking for athletes, [and] not just rugby athletes," Williams says. "We're looking for the best athletes and see if we can bring them in and convert them.

"We have Temi [Ogunjimi], who was a wrestler, and we converted her to a rugby player. In tournaments like this, those type of players are getting the opportunity to play and they're getting that kind of joy and love for the game."

Moleschi said her young teammates stepped up and showed what they could do on the biggest stage they've ever been on.

"I'm incredibly proud and to be able to captain them, it's such an exciting thing for myself, as well," she says. "They gave all their energy to me, I couldn't be prouder of them as individual or as a team."

Williams says that his team has been waiting for an opportunity like the one Lima offers.

Hogan-Rochester says keeping the title in Canadian hands was something that was top of mind for everyone.

"I feel like we definitely felt that [expectation]...we know what it means to people back at home and to ourselves as well, it was a theme throughout the week," she says.

The Canadian women didn't surrender a single point through their group matches and semifinal, while the men gave up only 17 on their way to the gold-medal match.

"They're playing for each other," Williams says. "One of their goals was to try and go through the tournament and... keep a clean sheet, that's what we want to do," Williams says. "You saw that in a few of the games, when teams made breaks, we had a bunch of girls turning and chasing.

"They've got great spirit and they just work together, collectively, really well."

Pan Ams were also a chance for players to experience what it's like competing at a major, multi-sport Games, as both men's and women's teams have already qualified for Tokyo 2020.

"We're using these games as a stepping stone," Hogan- says. "Our goal is 2020, so we're just taking it one tournament at a time. We were going for gold here, and we got it, and we want to keep up that intensity."

The women's team earned their spot at the Summer Games tournament after finishing third in the World Sevens Series this past season, while the men's path to their first Games needed to go through a qualifying tournament in Grand Cayman in July.

"Nathan and the senior guys were like 'we can't tell you how to approach it, you have to find your own way,' and a lot of the young guys have done that," Paul says. "I'm really happy with Brennig Prevost and Josh Thiel, Josiah Morra, they've had more contact time in this tournament, and it's fantastic for their growth.

Both teams say they are here for the same reason: to measure their readiness for Tokyo and the coming World Rugby Seven Series season, which begin this fall.

"Our main goal for this tournament is to get everyone some game time and get them to a major games and get them prepared for when we get on the Series," Williams says. "As you can see, that lineup we had a lot of new girls to this squad and it didn't look like they missed a stride."

Now that their Pan Am Games are over, the women's team won't have much time off — training for the coming season begins next week.

"There's not much downtime, but it's a huge year for us," Williams says. "The Olympics are coming up and we're not going to sleep or rest, we're going to get ready and prepare. It's going to be a long season but we're looking forward to it."