Canada's archery team defeated Chile 5-4 in the men's team recurve final and Crispin Duenas added gold in the men's individual recurve — earning Canada a spot at the 2020 Tokyo Olympics in the process — as competition at the 2019 Pan American Games wrapped up on Sunday.

Canadian earns a spot at Tokyo 2020

Canada's archery team defeated Chile 5-4 in the men's team recurve final and Crispin Duenas added gold in the men's individual recurve — earning Canada a spot at the 2020 Tokyo Olympics in the process — as competition at the 2019 Pan American Games wrapped up on Sunday.

Ottawa's Eric Peters, Toronto's Duenas and Brian Maxwell of Abbotsford, B.C., won the team event in a shoot-off after the match was tied 2-2 after four rounds. Canada led 4-0 after the first two rounds before Chile came back to tie over the next two.

The United States defeated Mexico 5-3 in the bronze-medal match.

The American team of Brady Ellison and Casey Kaufhold won the mixed recurve gold Sunday, which earned the U.S., one men's and one women's quota spot. But because Ellison had already secured a men's individual recurve quota spot for the U.S., at the 2019 world championships, the spot was reallocated to the men's final to give the event two Olympic berths. 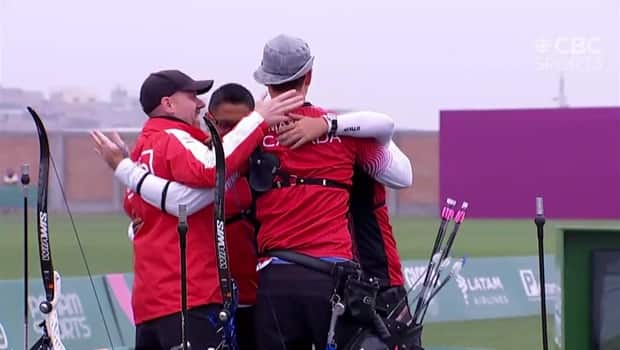 The Canadian team of Duenas and Stephanie Barrett of Newmarket, Ont., was defeated 5-3 by Mexico in the mixed recurve bronze-medal match.

Meanwhile, gymnast Ellie Black of Halifax was named Canada's flag-bearer for the closing ceremony. Black won two gold, two silver and one bronze in Lima to become Canada's most decorated Pan Am gymnast with 10 career medals.

Mathieu Bilodeau of Quebec City did not finish the 50-kilometre event. Only five of the 14 entrants crossed the finish line.

Mina Coulombe of Baie-Comeau, Que., was defeated by Costa Rica's Diana Brenes in the women's 78-kilogram 1/8 final. Marc Deschenes of Laval, Que., fell to Jose Nova of the Dominican Republic in the men's 100kg 1/8 final.