Jacqueline Simoneau and Claudia Holzner won the gold medal in the duet artistic swimming competition Wednesday at the Pan American Games, and earned Canada a spot at the 2020 Tokyo Olympics in the process.

Jacqueline Simoneau and Claudia Holzner developed a pre-swim routine to calm their nerves when they joined forces as an artistic swimming tandem. It involves a declaration of trust and a reference to a Disney character.

And it seems to be working.

Simoneau, of Chambly, Que., and Calgary's Holzner combined to defend Canada's artistic swimming duet title Wednesday at the Pan American Games and earned Canada a spot at the 2020 Tokyo Olympics in the process.

"It was such a special moment," Holzner said. "Before we swam our coach [Gabor Szauder] was like, 'Jackie, go for a second Olympics,' and 'Claudia, become an Olympian."'

Simoneau and Holzner returned to the pool later Wednesday as part of Canada's nine-swimmer squad in team competition, with another Olympic berth on the line, and took the top of the podium for the second time with 179.6731 points. Mexico took second (175.1243) and the U.S. followed (170.8114).

Simoneau and Holzner, who were both members of Canada's gold-medal winning team entry at the 2015 Pan Am Games in Toronto, started swimming together as a duet in 2017. Simoneau said she and Holzner came up with a unique pre-swim routine the moment their partnership was formed.

"We hold each other's hands and we look each other in the eye and we say, 'I trust you.' And then there's a secret word that we say right before we go.

"We came up with this the moment we started swimming together. It's a ridiculous word, but for us it just means having a calm confidence. It's Perry. Perry the platypus. It's a TV character on the Disney show "Phineas and Ferb.'"

Simoneau and Holzner returned to the pool later Wednesday as part of Canada's nine-swimmer squad in team competition, with another Olympic berth on the line.

Canada swept synchronized swimming events at the Toronto Games, with Simoneau and Karine Thomas earning duet gold to go with the team victory. Simoneau and Thomas went on to place seventh at the 2016 Rio Olympics.

The sport was renamed from synchronized swimming to artistic swimming in 2017.

Later Wednesday, gymnast Ellie Black of Halifax added to her record Pan Am medal haul with a silver medal in the women's beam event, her fifth medal this year. Black has won 10 medals over the last two Games to become Canada's most decorated Pan Am gymnast.

WATCH | Black adds silver in beam at Pan Am Games: 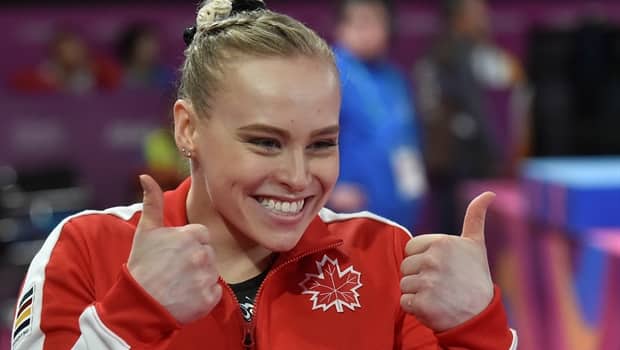 Ellie Black adds to her medal haul at Pan Am Games

"It's incredible to come away with one more medal," Black said. "It's great for this team that we've done so well."

Black had a chance at a 11th medal but finished fourth in the floor competition. 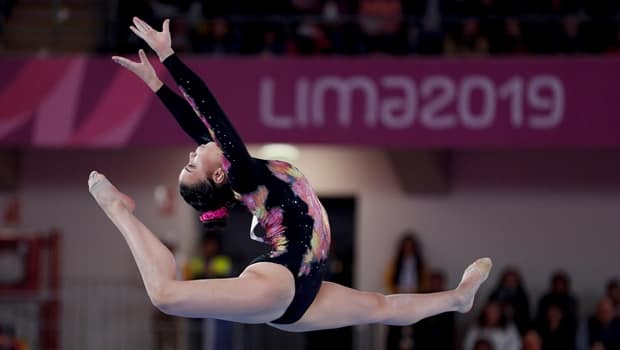 There was more good news for Canada, however, with Brooklyn Moors of Cambridge, Ont., winning gold.

Tina Irwin of Stouffville, Ont., riding Laurencio, took silver in individual dressage with a score of 77.780. Sarah Lockman of the U.S. won gold with 78.980. Irwin was part of Canada's squad that won gold in the team dressage event on Monday and earned a berth at the 2020 Games.

"I was thrilled with the team gold but now to be on the podium individually is fantastic," Irwin said. "It was definitely my goal, I was coming to win a medal. I was hoping for, gold but that's okay. My horse was amazing, the whole competition."

The Canadian women's team of Hollie Naughton of Mississauga, Ont., Samantha Cornett of Deep River, Ont., and Calgary's Danielle Letourneau took silver after a 2-0 loss to the United States in the final.

Meanwhile, the men's team of Montreal's Shawn DeLierre, Nick Sachvie of St. Catharines, Ont., and Calgary's Andrew Schnell picked up a bronze medal after losing 2-0 to Colombia in the semifinals. Canada won a record seven squash medals (three silver, four bronze) at one Pan Am Games.

"Obviously, we're disappointed with the results because we were hoping to go for gold," Schnell said. "But it's still just such an honour to play for your country and to play against a country like Colombia who are very fair players. Very nice people. So it was a pleasure to play today."

"Iin this event I was on all day and and it feels wonderful because it's been 28 years since my first team medal in the Pan Am Games where I got gold in Cuba in1991," said Wennberg. "And so it's almost three centuries or three decades here before for winning another medal."