On this week's edition of Olympic Games Replay, CBC Sports showcases some of the most memorable track and field moments from the Rio Olympics.

In the middle of the month of March, global sport abruptly ground to a complete halt.

As the world struggles to curb the advance of COVID-19 and the spread of the coronavirus, the fields of play have been silent locally, nationally, and internationally, ever since.

There are few things which have the raw, congregating, power of sport. For the immediate future, the instinctual tendency to gather, compete, and become witnesses as spectators, has become forbidden.

Until the whistle blows and the action begins again, many of us can only reminisce about the often fleeting and spectacular nature of seminal sporting events we have seen in the recent past. 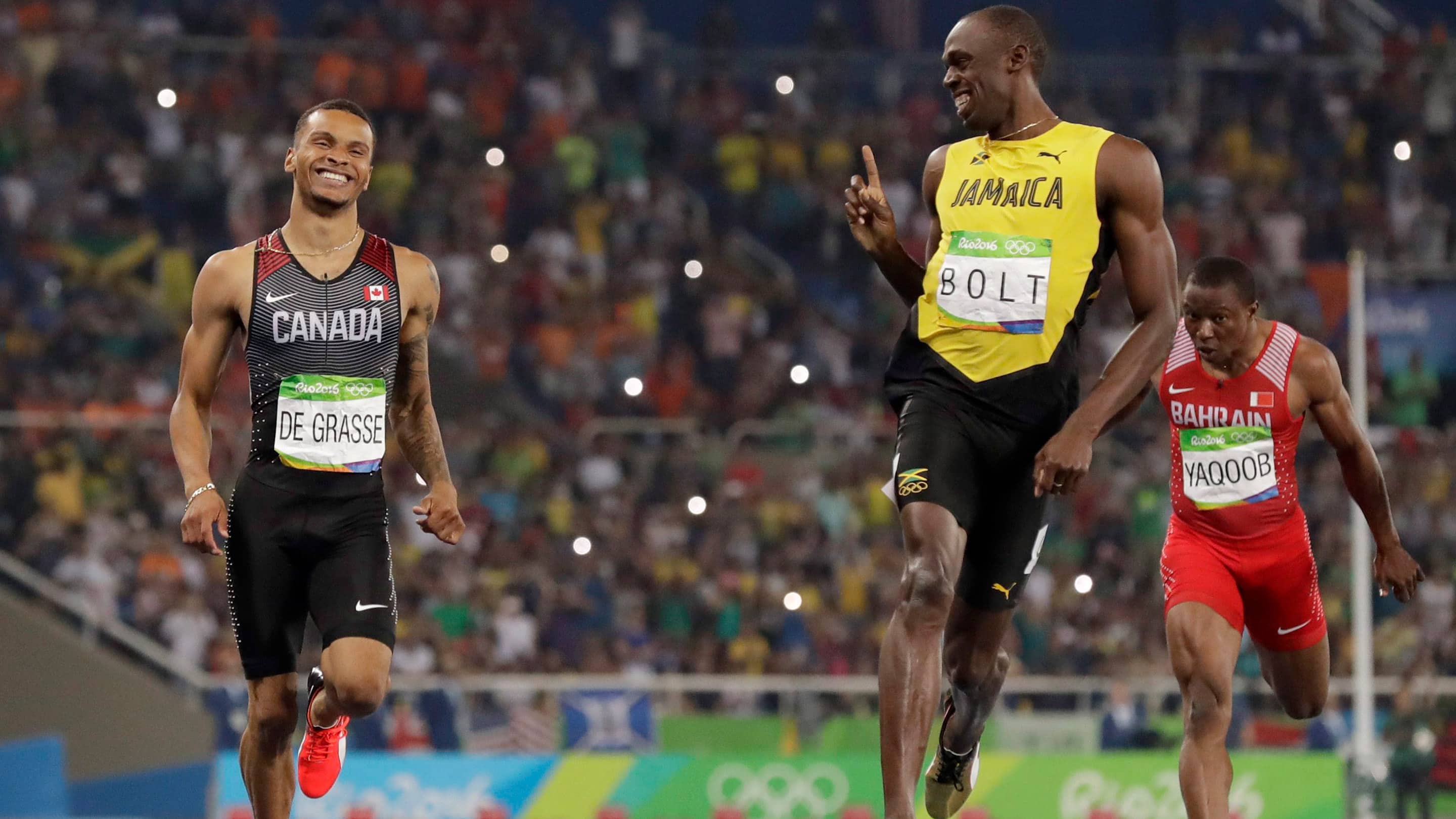 The Saturday, April 11 broadcast is the fourth of several weeks of programming at CBC Sports which showcases some of the most memorable moments from various editions of the Olympics, both winter and summer.

Episode #4 of Olympic Games Replay features athletics competition from the 2016 Games in Rio de Janeiro, Brazil, in particular the impact that young sprinter Andre De Grasse of Markham, Ont., made by winning three medals on the track.

De Grasse and his playful rivalry with the world's fastest man, Jamaican legend Usain Bolt, became one of the signature stories of the Games and a tale which will long be remembered as one of the high-water marks in Canadian track and field lore. 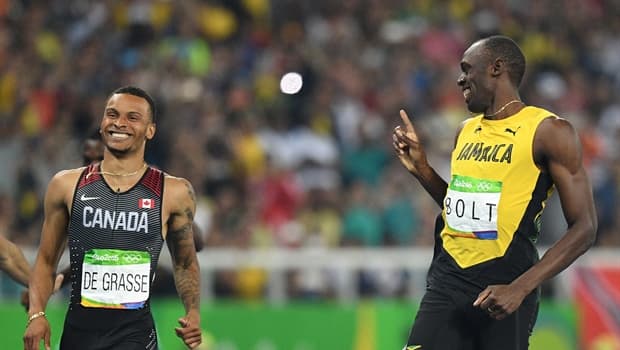 11 months ago
0:43
Watch highlights of Andre De Grasse and Usain Bolt battling it out and building a bromance at the Rio 2016 Olympics. 0:43

Athletics has been the foundation sport for the Olympics since the first modern Games were staged in Athens, Greece in 1896. The Olympic motto, "Citius, Altius, Fortius," "Faster, Higher, Stronger," has its basis in the track and field events of running, jumping, and throwing.

But over the years, Canadians have rarely had as much success in athletics as they did at Rio 2016 where they combined for six medals and tied swimming as the most productive sport for Maple Leaf men and women in Brazil.

Those six medals were the most won by Canadian track and field athletes since they captured nine at the 1932 Olympics in Los Angeles. The Canadians in Rio were fresh off a best-ever performance at the IAAF World Athletics championships the summer before in Beijing. That's where they won eight medals, including gold by high jumper Derek Drouin and pole vault's Shawnacy Barber.

Not since the 1996 Atlanta Olympics, when Donovan Bailey recorded double gold in the men's 100m and 4x100m relay, had there been as much buzz about Canadian athletics. 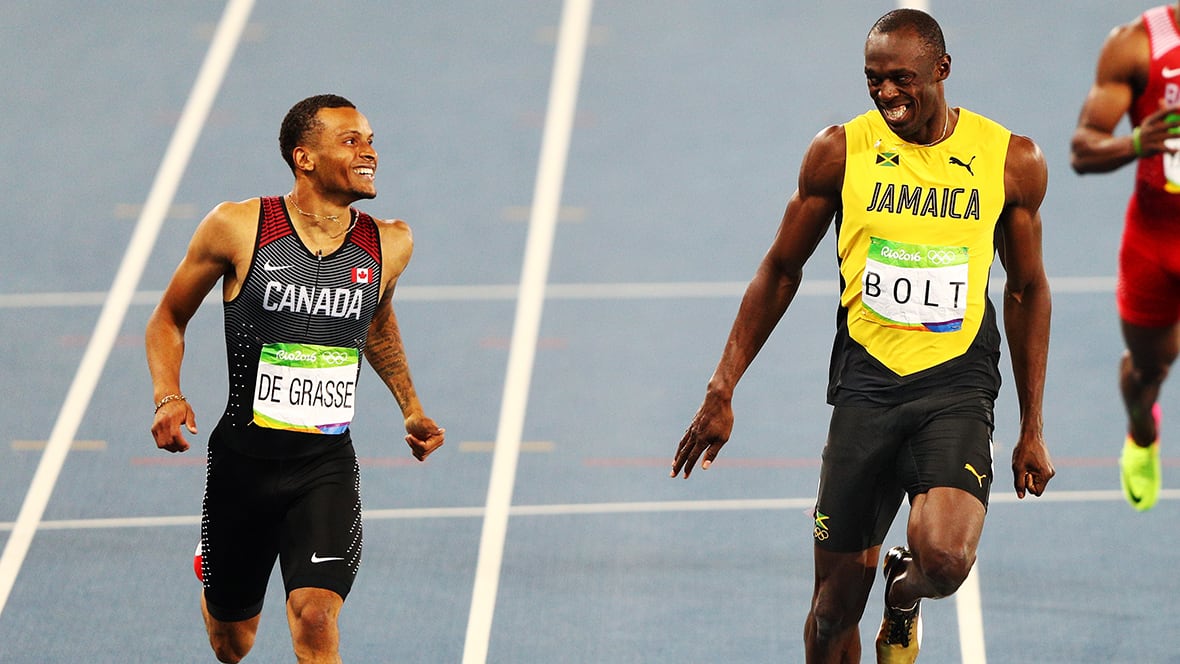 'Didn't expect to be neck-for-neck like that': De Grasse recalls definitive showdowns with Bolt

And then, as track and field opened up in Rio, the 21-year-old De Grasse roared into the fast lane and won bronze in the men's 100m against the mighty Usain Bolt and the American veteran Justin Gatlin.

"A skinny prodigy who had quit school to sign a multi-million dollar pro contract and was now joining the elite ranks of full grown Olympians like Bolt, Gatlin, and Yohan Blake. His rise was meteoric."

But it was in the unfolding of the men's 200m competition that De Grasse really made his mark. There was the precocious youngster challenging the giant-like Bolt in the semifinal and the famous turn of the head, smile, and finger wave, that gave rise to the 'bromance' which the 'Jamaican King' and 'Canadian Kid' enjoyed for all to see in Rio.

"De Grasse's silver medal in the 200m behind Bolt was his coming of age," said Lee. "Even Bolt suggested the lanky Canadian might be his heir apparent. It was an exponential achievement."

The lone Canadian gold medal in athletics came near the end of the Games in the men's high jump. Derek Drouin of tiny Corunna, Ont., near Sarnia, came to Rio as the reigning world champion. Drouin won Canada's only track and field medal at the previous Olympics in London in 2012 having tied for bronze.

In Rio, at the only Olympic high jump competition broadcast in its entirety in Canadian history, Drouin didn't miss a single attempt and became the gold medal champion by clearing the bar set at 2.38 metres.

"From the moment I started warming up for my qualification round until I raised my arms in appreciation for the fans after my final, I felt like I could do no wrong," Drouin reminisced.

"Every athlete dreams about this kind of Olympic experience; I was lucky enough to live it. I almost had to give my head a shake when my last competitor had exited the competition before I truly understood the magnitude of the situation."

For his part, Mark Lee was thrilled by Drouin's perfect performance.

"I would say his gold medal was one of those rare moments in sport when you watch an athlete having their best day when it matters most," Lee concluded.

"To think Derek became the first Canadian to win an Olympic field event since Duncan McNaughton's high jump gold in Los Angeles in 1932 really put his accomplishment into perspective. When competition in your sport comes from more than 200 countries around the world, it's pretty awesome to be the best."

Van Niekerk blazes to new record in the 400

In addition to the Canadian performance, CBC's track and field analyst, decathlete, and Olympian, Michael Smith pointed to another stellar moment from Rio 2016.

It was South African Wayde van Niekerk setting a blistering world record on the way to the gold medal in the men's 400m final.

"The fact that van Niekerk did this solo, running blind from lane No. 8, made it even more of a performance of a lifetime," Smith reckoned.

"Everyone knows and speaks of Usain 'The King of Sprinting' Bolt, but van Niekerk is not as much of a household name – despite the fact he is the only human to run sub 10 seconds in the 100m, sub 20 seconds in the 200m, and sub 44 seconds in the 400m. I'm still a sports physiology geek and those simple stats are otherworldly!"

All in all, athletics, from any angle, lived up to hype in Rio making it one of the most interesting meets in history from both a Canadian and international perspective.