Vicky Holland of Britain cruised to victory in the women's ITU World Series triathlon on Saturday in Montreal. Joanna Brown of Carp, Ont., draped in a Canadian flag, crossed the finish line fourth at one minute 10 seconds off the lead.

The women's triathlon title is down to a two-way battle.

Vicky Holland of Britain cruised to victory in the women's ITU World Series triathlon on Saturday ahead of American series leader Katie Zaferes, setting up a showdown between them during the championship finale Sept. 12-16 in Gold Coast, Australia.

Holland, from Bath, England, completed the Olympic distance 1.5-kilometres of swimming, 40-kilometres of cycling and 10 kilometres of running in hot, sunny conditions in one hour 59 minutes 29 seconds. The men will race the same course through the scenic streets — some of them cobbled — of Old Montreal on Sunday.

Click on the video player below to watch Canada's Joanna Brown match a career-best finish: 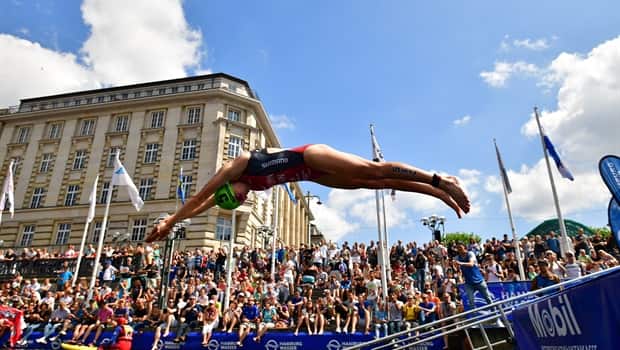 2 years ago
1:46
The 25-year-old matched a career-best with her 4th-place finish at the ITU World Series triathlon in Montreal 1:46

It was Holland's third win of the year and second in a row after her triumph in Edmonton a month ago.

"Wins are hard to come by, people underestimate how hard it is, but it seems that now I'm on a roll," said 32-year-old Holland. "I can't stop winning, which is an amazing place to be.

"I just need one more. I'm delighted with what I've done this year. Three wins and a second. I couldn't ask for much more."

"I've raced in Canada four times and I've won three — that's pretty good isn't it?" said Holland. "Hey, I've got a good record here so I want to keep coming back. Please keep letting me back in."

Joanna Brown of Carp, Ont., crossed the finish line draped in a Canadian flag in fourth place at one minute 10 seconds off the lead, repeating her performance in Montreal last year.

"As soon as I got off the bike, it took me a couple of laps to feel better, but as soon as I started rolling on the run I knew I was good to go," said Brown, the Commonwealth Games bronze medallist. "I could see fifth and sixth in front of me.

"I felt better every lap. When I saw that fourth place wasn't that far in front I pushed hard to catch up."

Nicola Spirig of Switzerland was fifth at 1:23.

Zaferes retained her lead in standings with 4,418 points but second-place Holland closed the gap with 4,384 heading into the season finale.

"Now the points are close and it will be all to play for on the Gold Coast," said Holland. "It'll be I think whoever finishes in front of whoever.

"That'll be the person that takes home the world title which, in a way, is better for the fans of the sport."

Zaferes fell behind on the run and had to play catch-up to take second place. Now she expects a strong challenge from Holland.

"Vicky is such an amazing athlete," she said. "It'll come down to the wire in Gold Coast.

"It's going to be hard and tough but I'll be ready for it. I just need to have a strong swim, bike and run and be ready for anything. Whether it comes down to a breakaway or a running race, I can't let those gaps form like I did today."

It looked early in the run that there could be a British medal sweep, which hasn't been done by any country since the Americans in 2015, but Jodie Stimpson dropped back to sixth and Jessica Learmouth fell to eighth.

Amelie Kretz of Ste-Agathe, Que., did not race due to a knee injury. Ottawa native Kirsten Kasper, who races for the U.S., finished 18th.