Loren Gabel had two goals and an assist to pace Canada to a 6-1 win over host Finland at the women's world hockey championship Tuesday in Espoo. The Canadians will meet Germany in Thursday's quarter-finals.

Canada finishes 2nd in Group A; Marie-Philip Poulin remains out with knee injury

The 21-year-old from Kitchener, Ont., scored a pair of goals and assisted on another in Canada's 6-1 win over host Finland on Tuesday.

Canada (3-1) finished second in Group A behind the unbeaten United States and will play Germany in a quarter-final Thursday.

Gabel says she shoots 500 pucks a day in the off-season to hone and strengthen her shot.

Her second goal Tuesday and third of her first world championship? A quick-release wrister top shelf. 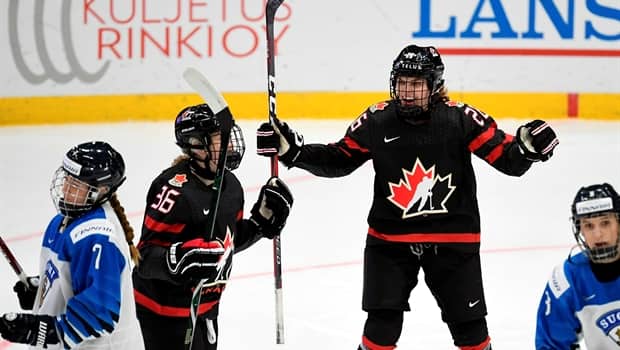 Gabel, Ann-Sophie Bettez and Brianne Jenner were a productive line as Bettez assisted on both Gabel goals.

Jenner scored a pretty backhand goal on a dish from Gabel, who got her stick on a Bettez shot and redirected it in for Canada's first goal of the game.

"They're playmakers, they can put the puck in the net and I think we're starting to build that chemistry," Bettez said.

"I think I use my speed pretty well, [winning] the battles and Loren is able to put the puck in the net and she showed that tonight.

"She's able to finish the play. Jenner is complementing [with] faceoffs. The three of us each have a different strength that completes a line."

Rebecca Johnston, Sarah Nurse and Erin Ambrose also scored for Canada, while Shannon Szabados made 22 saves for her second win of the tournament.

Finland goalie Noora Raty allowed three goals on 26 shots before she was replaced late in the second period by Eveliina Suonpaa, who had 23 saves.

Jenner wore the captain's 'C' in the absence of Marie-Philip Poulin, who did not play after reinjuring a problem knee the previous evening in a 5-1 win over Russia. 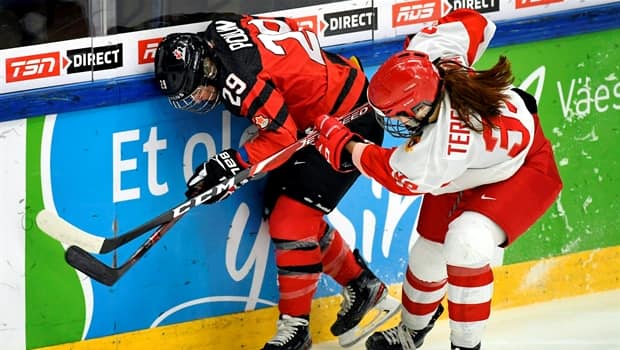 Head coach Perry Pearn wasn't ready to declare Poulin out of the tournament before her knee is assessed by the medical staff.

"The decision will be made, but I will be surprised if she is able to play," Pearn said.

All Group A countries and the top three in Group B advanced to the quarter-finals. The bottom Group B countries — Sweden and France — were relegated.

So Thursday's other quarter-final matchups will be: United States and Japan; Finland and the Czech Republic; Russia and Switzerland.

The winner of U.S.-Japan meets the winner of Russia-Switzerland in one semifinal, while the Canada-Germany victor takes on the Finland-Czech winner in Saturday's other semifinal.

The medal games are Sunday.

The Finns had momentum behind them after back-to-back wins over Switzerland and Russia.

But the Canadians dominated the faceoff circle, didn't allow the Finns clean entries into the offensive zone and stalked Finland's net to produce a pair of first-period goals.

A rematch is in the cards Saturday if the two countries win their respective quarterfinals.

"We have a feeling we're going to be meeting them again so definitely sending a statement today was very important," Bettez said.

"Winning each period today for us was huge. We want to play our best hockey moving onto the medal rounds and I think we're getting closer to that goal."

Sweden, meanwhile, will not play in the top-tier world championship in Halifax next year for the first time in tournament history. The Swedes were relegated with a 3-2 loss to Japan.

Kendall Coyne Schofield and Lee Stecklein scored two goals each, and the United States routed Russia 10-0 Tuesday in the final game of the preliminary round.

Annie Pankowski had three assists, and Alex Carpenter added two as 15 Americans had at least a point. The United States wrapped up pool play undefeated for a fourth straight world championship.

The U.S. will play Japan, a 3-2 winner over Sweden, in the quarter-finals Thursday.