Canada shuts out Switzerland in opener at women's hockey worlds

Emily Clark scored a pair of goals for Canada in a 6-0 win over Switzerland to open the women's world hockey championship Thursday.

Marie-Philip Poulin dresses, but remains on bench for game with injury

The coach voiced his displeasure, the players got the message, and Canada posted a 6-0 win over Switzerland to start the women's world hockey championship Thursday.

Emily Clark scored twice to spark a four-goal burst in the third period.

"I might have players throwing water bottles at me pretty soon," head coach Perry Pearn said. "To our players' credit, they listened.

"This is a great group of women because they're looking for accountability and they're OK with me being really honest with them from the accountability standpoint.

"As long as I'm fair and as long as I'm right in terms of holding them accountable for the right things, I think they'll buy in."

Natalie Spooner had a goal and an assist for Canada with Loren Gabel, Jamie Lee Rattray and Blayre Turnbull also scoring at Metro Areena. Defender Laura Fortino contributed a pair of assists.

Shannon Szabados made six saves in net for her 20th career shutout and 50th win wearing the Maple Leaf. 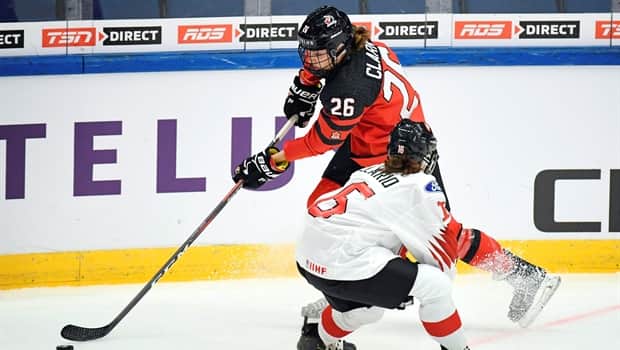 "It was a fun game for me personally," said the 21-year-old Ohio State netminder.

Canadian captain Marie-Philip Poulin participated in warmup Thursday, but remained on the bench for the game. She is said to be day-to-day with a knee injury.

Canada takes on defending champion United States on Saturday in a Group A preliminary-round game.

Trailing 2-1 Finland after two periods, the Americans scored five unanswered goals in the third Thursday to down the host country 6-2.

Pearn stepped behind the Canadian women's bench this season after 21 years as an NHL assistant coach with multiple teams.

The Canadian women finished second in November's Four Nations Cup and won two of three games against the U.S. in February's Rivalry Series.

Pearn wants Canada to bring the hard, battling brand of hockey that won the series to Espoo.

The Swiss didn't register a shot on net in the third.

The women's world championship is a 10-country tournament for the first time.

All Group A teams and the top three from Group B will play quarterfinal games April 11.

The medal games are April 14, which is also voting day for Finland's parliamentary elections.

Germany edged Sweden 2-1 in a shootout and Japan blanked promoted France 3-0 in Group B games Thursday.

She dressed for the Clarkson Cup final March 24, but stayed in the bench supporting her teammates in a 5-2 loss to the Calgary Inferno.

The 28-year-old forward from Beauceville, Que., skated twice with the Canadian team upon landing in Finland.

"You're talking about one of the best players in the world and I think we're going to be really careful before we risk anything," Pearn said prior to Thursday's opener.

"We're in the round-robin phase right now. We're not in a pressure situation where we feel we have to put her in."

"Definitely amazing to score my first goal in my first game," Gabel said.

"I was a little nervous, but as soon as I stepped on the ice, I put those nerves aside and just played the game I know how to play, and had confidence in doing so."

She and Spooner both beat Brandli's glove with wrist shots 16 seconds apart in the first period.

Clark said Pearn's demands during second-period timeouts to find another gear came through loud and clear.

"Those first two periods we played just OK and we definitely weren't up to the bar that we wanted to be," Clark said.

"It was a matter of just sticking to our systems and getting pucks on the net and creating those chances instead of playing around the perimeter."

Canada and Switzerland met for the first time at the world championship since 2013.

The expansion of the field shifted the Swiss into Group A, where they will face tougher competition in the preliminary round than they did in Group B.

"It's really hard, but for us, it's the best way to prepare for the quarters, and hopefully the semifinals and medal games," Brandli said.