USOC moves to shut down USA Gymnastics after Nassar scandal

The U.S. Olympic Committee is moving to revoke USA Gymnastics' status as the governing body for the sport at the Olympic level, meting out the nuclear option to an organization that has botched its own reorganization in the wake of a sex-abuse scandal involving former team doctor Larry Nassar.

Organization has made repeated mistakes after sexual abuse revelation

The U.S. Olympic Committee took steps Monday to decertify USA Gymnastics as the governing body for the sport at the Olympic level, choosing the nuclear option for an organization that botched its own rebuilding attempt in the wake of a sex-abuse scandal involving former team doctor Larry Nassar.

In an open letter to the gymnastics community, USOC CEO Sarah Hirshland said "you deserve better," and that the challenges facing USA Gymnastics are more than it is capable of overcoming as currently constructed.

The USOC itself also has faced criticism for not responding quickly and appropriately to sex abuse cases, and though the move was cheered by the gymnast whose own revelations helped propel Nassar's years of abuse to the fore — `'THANK YOU," tweeted Rachel Denhollander — others viewed it as a ploy to shift blame for the scandal.

THANK YOU. After overseeing the abuse of 100's of children by Larry, national coaches and club coaches, it is high time for this organization to end and a new one, truly dedicated to athlete safety, to begin. A COMPLETE regimen change should start now. This is for every survivor. <a href="https://t.co/EpEbYPfth8">https://t.co/EpEbYPfth8</a>

"Today's announcement by USOC seeks only to deflect from their total failure over decades to protect the gymnasts in their care," said a statement from attorneys Michelle Simpson Tuegel and Mo Aziz, who represent Olympian Tasha Schwikert and her sister, Jordan, in their lawsuit against USAG and the USOC.

Even with a new board of directors that started in June, USA Gymnastics made repeated mistakes while dealing with the aftermath of revelations that the now-imprisoned Nassar molested Olympians while working as a volunteer. Those included the botched hiring of a program coordinator and an interim CEO to replace Kerry Perry, who lasted barely nine months on the job after the USOC forced out Steve Penny.

The announcement comes only days after the U.S. team brought home nine medals from the World Championships in the first major meet in the lead-up to Tokyo in 2020. Five of those were individual medals won by Olympic champion Simone Biles, who is among the athletes who have not hesitated to criticize the organization. 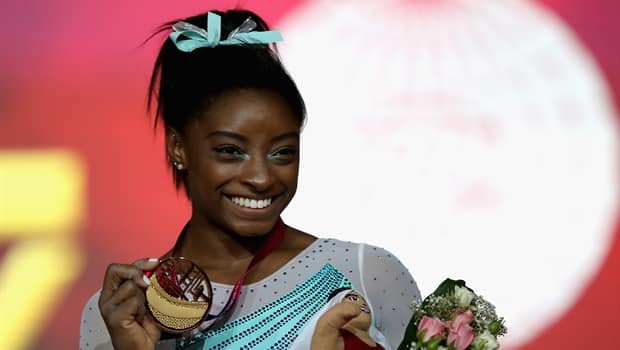 2 years ago
4:32
The American gymnast overcame a kidney stone to post an an all-around score of 57.491 and win her fourth all-around title at the 2018 Artistic Gymnastics World Championships in Doha. 4:32

By decertifying USA Gymnastics, the USOC is taking major action against an organization that never grasped control over its own rebuilding. But the move also leaves a void that cannot be easily filled. In addition to supporting elite and Olympic athletes, and selecting teams and coaches for international competitions, USA Gymnastics serves more than 150,000 athletes in 3,000 clubs around the country. There is no other organization standing by to fill that need.

"Seeking to revoke recognition is not a decision that we have come to easily, but I believe it is the right action," Hirshland said. "In the short-term, we will work to ensure that America's gymnasts have the support necessary to excel on and off the field of play. We are building plans to do just that no matter the outcome of the revocation process."

The federal law that governs the USOC gives the federation final say on which organizations represent each sport at the Olympics, and also establishes a process to decertify the organizations. But that process is used only under the most extreme circumstances. One example came in 1994 when the USOC recommended decertifying the NRA as the governing body for shooting, and the NRA accepted the decision. The USOC also has dictated changes and placed its own administrators in charge of smaller NGBs in need of overhauls.

Hirshland said she has given USA Gymnastics the option of surrendering its recognition voluntarily, though there was no indication of which direction USAG would go. It issued a statement saying it was looking at the USOC letter "and is evaluating the best path forward for our athletes, professional members, the organization and staff."

The statement detailed the challenges the new board has faced since taking over in June.

It is in search of its fourth president and CEO in the last 19 months thanks to a series of resignations, all of them under pressure from the USOC or the gymnastics' community at large.

Penny — named as a co-defendant in several civil lawsuits filed by former elite gymnasts— stepped down in March 2017. He was arrested last month and charged with destroying or hiding documents related to Nassar's activities at the Karolyi Ranch, the ex-national training center near Huntsville, Texas, where a number of gymnasts said Nassar abused them.

The organization named Perry as Penny's replacement but her tenure lasted barely nine months. She was criticized by several high-profile gymnasts, Biles included, for failing to offer a clear vision on the way forward and quit in September.

Her resignation came shortly after the hiring, then quick removal, of Mary Lee Tracy as elite development coordinator; Tracy had been supportive of Nassar when the allegations first surfaced.

USA Gymnastics brought on former U.S. Representative Mary Bono to serve as interim president and CEO last month. Bono didn't even make it a week, stepping away after drawing widespread criticism for an Instagram post she made shortly before she was hired that showed her coloring over the Nike logo on her golf cleats in response to the company putting former NFL quarterback Colin Kaepernick at the forefront of a marketing campaign.

All these moves simply added fuel to those who were seeking the total dismantling of USAG.

Olympian Jamie Dantzscher, the first gymnast to sue USAG, said she grew tired of USAG's "cynical PR statements about how much they care about athletes."

"It is time for this organization to be replaced," she said. "My only regret is that it has taken the U.S. Olympic Committee so long to act."