Georgia Simmerling has turned cycling as cross-training into a summer Olympic possibility. She will compete at her first track cycling World Cup in January, riding the team pursuit.

Ski cross racer has shot at Rio in track cycling 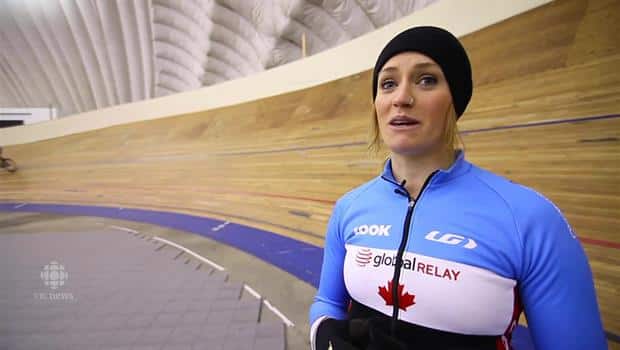 5 years ago
1:06
Georgia Simmerling has been to two Winter Olympics, as a Super G athlete and ski cross racer. Now she's trying to make it to Rio in track cycling. 1:06

The first words of her Twitter bio are: "2 Olympics | 2 Sports".

It's a cool and succinct introduction to 26-year-old Georgia Simmerling, who did the Super G at Vancouver 2010, and is now a five-time World Cup medallist in ski cross.

Simmerling is looking to add a third sport to that mix. In the 19 months since she first saw a velodrome, Simmerling has turned cycling as cross-training into a legitimate summer Olympic possibility.

In Hong Kong, she will compete at her first track cycling World Cup on Jan. 16-17, riding the team pursuit.

"I made a big decision to put ski racing and ski cross off for a season," said Simmerling. "It's going to be a super, super hard goal to accomplish and it's a very tough challenge but I really believe that I can go to Rio."

Yes, Rio 2016, which is just seven months away. With Canada's World Cup leading team pursuit? Yes to that, too.

In June 2014, Simmerling rode at a Cycling Canada talent ID camp in Los Angeles. "I had never been on a velodrome before. I had never ridden a track bike, and I showed up to L.A. and was like, 'Holy moly there's not a chance I'm getting on that thing,'" she recalled. "I fell in love with the sport after a week."

All of this in the ski cross off-season following two World Cup bronze medals and a 14th-place finish at the Sochi Olympics.

"She does not have a lot of fear," said ski cross Athletic Director Willy Raine. During one crash, in early 2012, Simmerling broke three vertebrae in her neck and back. She was in a body brace for seven weeks.

In December of the same year she won her first World Cup medal.

A week after another season-ending crash at 2015 world ski championships in January, she was back on her bike.

Simmerling called Richard Wooles, who coached the Canadian track cycling team at the past two Games and helped win women's team pursuit Olympic bronze in London. He now coaches with Cycling BC.

Wooles directed her to a bike lab for some basic tests. "She had the raw potential pretty much straight off and it was like 'Wow,'" he said. "You don't find athletes like this very often."

Simmerling's next call was in mid-spring to Craig Griffin, Canada's endurance track cycling coach. She told him she wanted to make his team.

"She knows what she wants and she goes after it," said Griffin, who told Simmerling to ride a 3:44 individual pursuit (3 km on the track). She made arrangements to train at the L.A. Velodrome, "I drove down there," she said, "within two weeks I rode a 3:44." (Simmerling's personal best has since dropped further to 3:36.)

In November, after a two-week stint with the development team, Griffin admitted Simmerling into the elite pool. "It happened pretty quickly with her and I wouldn't say that's the rule," he said. "She's an exception."

Still, it's a very good pursuit team, including Olympic medallist Jasmin Glaesser with Pan Am gold medallists Allison Beveridge, Laura Brown, and Kirsti Lay, among others.

Team pursuit is four cyclists racing four kilometres in a line. It's aerobically demanding and technical. Team pursuit riders must tuck forward, to create a flat back and become more "aero".

Simmerling's Olympic chances rest on how well she can 'ride in the line' in Hong Kong, and if named, at the UCI track cycling world championships in March. Griffin and Cycling Canada will choose a team of five (including one alternate) for Rio in April. If Simmerling goes to Brazil, it will be her third Olympics in a different sport.

"Anything less than a medal would be a disappointment," says Griffin of Rio 2016, a possibility that inspires Simmerling.

"They are gold medal hopefuls," she said of the pursuit team. "It's an amazing idea to be a part of."