Canada's Georgia Simmerling underwent surgery after breaking both legs in a ski cross World Cup event on Saturday at Nakiska.

Canada's Georgia Simmerling underwent surgery in Calgary, Alta., after breaking both legs in a ski cross World Cup event on Saturday at Nakiska.

Simmerling's injuries will take her out of the running for the 2018 Olympics. She was a medal hopeful and was ranked fourth in World Cup standings heading into Saturday's races. 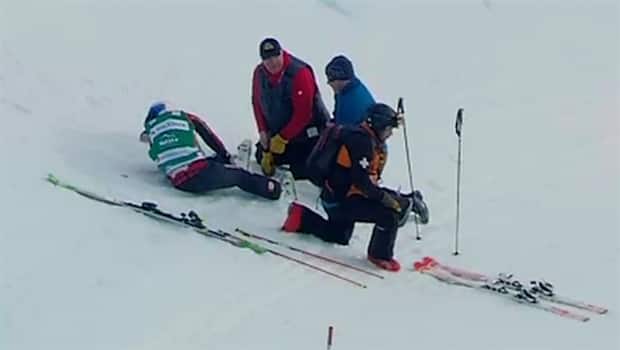 3 years ago
1:03
The multi-sport athlete was a medal favourite heading into Pyeongchang​ 1:03

"I was having a pretty solid season so far," Simmerling said. "I was really focusing on my technical cues during each race prep in order to perform at my best, be my best self, as opposed to the outcome of each race and the results."

"You know injuries are a part of ski cross and it's hard to avoid them. Unfortunately, I got injured at a pretty disappointing time in my season, right before the Games. I'm already wrapping my head around rehab, and going to tackle that like I take on anything: determined, with a little stubbornness and a lot of positivity."

The official ski cross team announcement will be made on Monday.

Simmerling's ski cross career has been incredibly successful, having reached the podium twice this season and nine times throughout her career.

The 28-year-old is the first Canadian to compete in a different sport at each of three different Olympic Games. She represented Canada in alpine skiing at Vancouver in 2010 before switching to ski cross for the Sochi Games in 2014.

Simmerling made the jump to summer sports at the Rio Olympics in 2016, earning a bronze medal in the women's track cycling team pursuit.