Captain Scott Tupper, playing in his 307th game for the Canadian men's field hockey team, stepped up under immense pressure to force a shootout in an Olympic qualifier against Ireland. Then the drama really began.

For a brief second, it looked as though Canada's Olympic men's field hockey dreams were dashed.

The clock showed zeroes, the Irish players were celebrating, and the Canadians were hanging their heads. Their hard-fought comeback to tie the two-game series in West Vancouver fell short — or so it seemed.

In a dramatic plot twist, the umpires awarded Canada a penalty stroke after an agonizing video review – they deemed Canada's Jamie Wallace was taken down in the scoring zone.

Captain Scott Tupper, playing in his 307th game for the Red Caribou, stepped up under immense pressure with a chance to tie the two game-series at 6-6 and force a shootout. He delivered like he has so many times in his career.

1 year agoVideo
1:27
Canada wins their two-game aggregate series with Ireland in a shootout on home soil. 1:27

The goal sent the crowd of more than 2,000 people into a frenzy and gave the Canadians new life. A five-player shootout awaited.

Then for the second time Sunday afternoon it looked as though Canada's Olympic dreams were over.

Ireland bolted out to a 3-1 lead in the shootout. Canada needed to score on their last two shots and have goalkeeper David Carter stop Ireland's last two shooters. The Red Caribou delivered on both counts.

The drama had ratcheted up another level as the game turned to sudden-death shots. The Irish scored first. Canada tied it again. On the seventh shooter, the game was decided. After Ireland missed, the stage was set for Adam Froese to clinch an Olympic spot for Canada.

As the crowd held its collective breath, Froese danced around the circle, stickhandling the ball wildly before calmly striking it into the back of the net. He threw his stick in the air. The Canadian team blasted toward him. The crowd erupted in a red-and-white celebration.

Canada found its way to the Olympics in the most improbable fashion.

"It's unbelievable. No real words for it. It's amazing," Tupper said with tears in his eyes. "Obviously, we weren't in the best spot after yesterday. We were feeling pretty down. You never know what's going to happen. For the guys to perform in the shootout is unbelievable. This is surreal."

Canada lost Game 1 on Saturday 5-3 to the Irish. The team's 3-1 victory in Game 2 forced the shootout.

The victory was reminiscent of Canada's qualifying game four years ago to earn a spot at the Games in Rio. They were also down 3-1 in the shootout to New Zealand and found a way back. Carter was also in the net for that game – he's 7-0 in shootouts for Canada.

"We just love the pressure. I love facing guys one-on-one," he said. "That's the first time I've done that, just come in for the shootout. Everyone had my back. The crowd support was incredible."

Antoni Kindler was the goalkeeper for Canada throughout the game and made a scintillating save late to keep their hopes alive. Then shootout specialist Carter took over.

"Every time we go into a shootout we're pretty confident we can come out on top," Carter said

After the victory, the Canadian players jumped up and down in the middle of the field, hugging each other. Fans screamed and cheered as the players continued to celebrate.

Then the team made their way around the field, saluting the home crowd and hugging family and friends along the way. Fans drove their cars by the stadium honking their horns. Many in the program called this two-game series the most important two matches ever on Canadian soil — and they didn't disappoint.

"I might cry," said Froese. "Honestly it couldn't have been a better place to do this. Family. Friends. It's been a long four years. We've worked hard."

The party spilled into the beer gardens alongside Rutledge Field. Players were still wearing their uniforms more than an hour after the end of the game, drinking beer and chanting with Canadian supporters.

"It's just a beautiful day in West Van," Carter said. "We're going back to the Olympics."

The Olympic berth means Field Hockey Canada is going to back-to-back Summer Games for only the second time in the program's history; the only other instance came in 1984 and 1988. 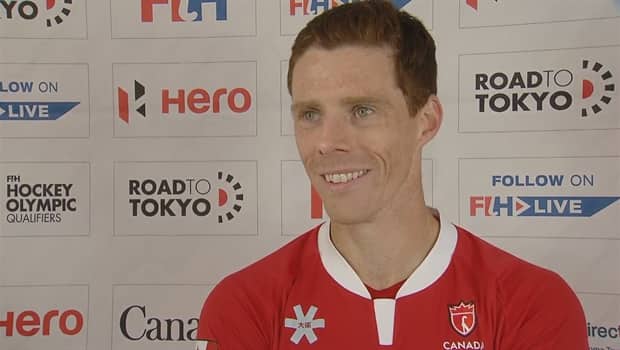 1 year agoVideo
3:12
Scott Tupper netted Canada's series tying goal on a penalty stroke to help his team secure a spot in the Olympics. 3:12

For coach Paul Bundy, it means putting the sometimes-overlooked version of hockey on the map in Canada.

"To qualify for the Olympics grows our game. It brings us together as a team," he said. "There are good things ahead to happen for field hockey in Canada."

It's not the way the coach or any Canadian player imagined qualifying for the Olympics, but the Red Caribou carved out a memorable moment in Canadian sports lore on a brilliantly sunny Sunday in late October.

"It's just an amazing way to qualify for the Olympics," Bundy said. "We're not a very big sport in Canada but we have a small community who support us. Whoever says our game is boring they should watch this."