This week in Zagreb, Croatia, Stephen Gogolev is looking to become the first Canadian to climb the podium at the world junior figure skating championships since Nicolas Nadeau captured silver in 2016.

Stephen Gogolev is barely 14 years old, but there is no childhood naivete to his skating.

The Toronto teen has a keen sense of body awareness that belies his age, says Elvis Stojko, and will be one of his biggest strengths in years to come.

"I can tell when he's skating, it's not just a sense of 'Oh, I can jump. Wee!' and he's just doing it," Stojko, a former Canadian figure skating star, said. "I can tell he's actually very connected with his body. He jumps like a little man, because his co-ordination is beyond his years, so he has the feel for it, which is going to help him later on."

This week in Zagreb, Croatia, Gogolev is looking to become the first Canadian to climb the podium at the world junior figure skating championships since Nicolas Nadeau captured silver in 2016.

In his first season eligible to compete as a junior, Gogolev won the junior Grand Prix final in Vancouver in December. Not only was he the youngest champion in the history of the event — then 13 — he also broke the world junior records for both the free skate and the combined scores.

He followed that up with a silver medal at the Canadian senior championships in January in Saint John.

Gogolev had been on Stojko's radar since he was landing triple Axels at age 10.

"Then just seeing him progress from there ... he's a phenom," Stojko said. 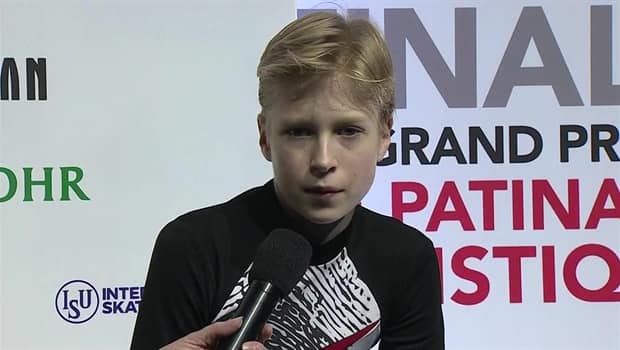 2 years agoVideo
1:50
13 -year-old Canadian won junior's men's gold at Grand Prix Final. 1:50
The three-time world champion watched Gogolev with a keen eye in Saint John, and said the body awareness he showed even in practice and warmup said plenty about the young star.

"I saw him miss a quad Salchow in his warmup, and I could tell it caught him off-guard, his shoulder went a little early before his foot fired," Stojko said. "Then he reset himself [and landed it on the next attempt].

Gogolev, who is coached by Lee Barkell at the Toronto Cricket, Skating and Curling Club, won't be eligible to compete at the senior world championships until 2021, less than a year before the 2022 Olympics. But he's already rewriting history.

Gogolev reminds Stojko of a young Evgeni Plushenko, and not because of his blond hair and Russian roots.

"When I saw [Plushenko] for the first time when he was 15, 16, he had that body awareness, on his triple Axel especially," Stojko said.

The one factor that could trip up the young skater is his inevitable growth spurt. At about 90 pounds, Gogolev was dwarfed by winner Nam Nguyen in Saint John.

Nguyen had his own growth spurt struggles. He shot up soon after winning gold at the 2014 world junior championships. It took him a couple of seasons to adapt to his bigger and stronger body.

"I remember when I was 16, I was working up to triple Axel, and then in one summer I lost everything, I was down to double Axel, I could barely do it," Stojko said. "Because my timing completely changed. I had to work myself back up to it again.

"There is the growth spurt, but it's the power change," he added. "You'll gain weight, because the muscle will pack on, and you'll gain power, so your timing ... you'll end up being a bit like popcorn, and it throws that gauge off."

Canada has seven entries competing this week, two each in men, pairs and ice dance, and one in women.

Joseph Phan of Laval, Que., is the other men's entry, while Alison Schumacher of Toronto is the lone entry in women's singles.

Canada's pairs teams are Brooke McIntosh of Toronto and Brandon Toste of Mississauga, Ont., and Gabrielle Levesque of Bridgewater, N.S., and Pier-Alexandre Hudon of Saint-Roc-Des-Aulnaires, Que.

The ice dance teams are Marjorie Lajoie of Boucherville, Que., and Zachary Lagha of St-Hubert, Que., and Alicia Fabbri of Terrbonne, Que., and Paul Ayer of Brossard, Que.