Canadian figure skater Gabrielle Daleman put her career on hold so she could concentrate on her mental health. Her mother Rhonda has agonized over her daughter’s pain, and reveals the anguish of watching her child go through gripping anxiety and depression.

‘It didn’t matter how great an athlete she was, she needed to regain her health,’ says Rhonda Daleman

In my mind, Canadian figure skater Gabby Daleman is a tiger. I told Gabby's mother Rhonda that her daughter's fierceness as a competitor sets her apart. Rhonda chuckled at my comment.

"I call her a tiger too. She was born in the year of the tiger on the Chinese calendar," she said. "I always say to people that she is so fierce on the ice but that doesn't always translate off the ice."

Daleman has gone public with her mental health struggles. Her story is about discovery, diagnosis, acceptance and the pursuit of mental health.

Turns out that although it's the backdrop, skating doesn't have as much to do with the story as one might think.

"Athletes who are attracted to figure skating are perfectionists, which is about being concerned with the achievement of perfection," said Rebekah Dixon, who holds a master's degree in developmental psychology and has taught psychology and human development at the college and university levels.

"This leads to being more focused on other people seeing you as perfect, which in itself is a problem, because you're focusing on something that is unattainable."

I sat down with Rhonda to talk about how Daleman stepped away from the rink months ago in an effort to regain her mental health.

Gabby Daleman is a two-time national champion, world bronze medallist and Olympic gold medallist in the team event.  It's helpful to think about skating as the Daleman family business. Rhonda's coworkers call it 'her other job,' Gabby's father Michael is fully involved, and brother Zack, who is a Canadian national junior pairs skater, is also Daleman's best friend. 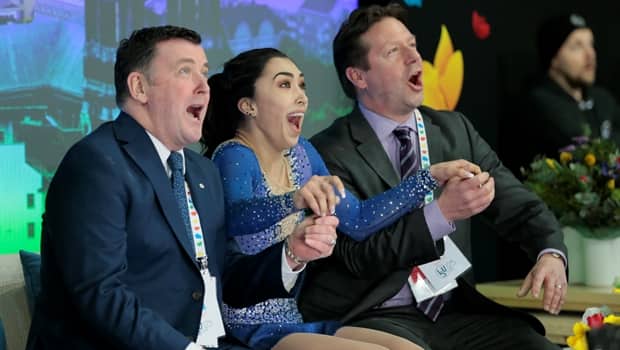 4 years agoVideo
7:58
The Newmarket, Ont. resident won her 1st world championship medal with a score of 213.52 points at the World Figure Skating Championships in Helsinki, Finland. 7:58

Daleman first went on the ice when she was just a few weeks shy of her fourth birthday. It was not love at first skate. She was sobbing and frightened. A kindly coach at the Aurora Skating Club scooped her up and carried her around the rink, her first two times. By her third trip to the rink, Daleman happily skated by herself.

Very early on, it was clear that she was a bit of a skating prodigy. She challenged her earliest instructors with, "I'm bored. Can we do something else now?"

The rink was a great place for Daleman. She experienced success and accomplishment — satisfactions that were far harder to come by at school. Daleman has attention deficit hyperactivity disorder (ADHD) and a learning disability. The challenges she faced in the classroom led to teasing and bullying by the other students. As a globe-trotting elite athlete, Gabby started receiving special accommodations from the school.

It wasn't fun for Daleman and especially heartbreaking for Rhonda.

"For those who are born with a propensity towards depression, environmental factors can bring it out. Nature or nurture, it's hard to tell," says Dixon, who has a private practice catering to national and international elite figure skaters.

"A perfect storm is created when you have heredity factors and an environment filled with expectations."

That was the case with Daleman. The crisis came in fall of 2018, when she fell and hit her head during a training session before Salt Lake City's Figure Skating Classic. Not wanting to cause a fuss and believing that no real injury had been caused, Daleman kept the slip to herself.

While in Salt Lake City, and after a subpar performance, Rhonda sensed that something was wrong.

"I honestly handled it badly. I got upset. I didn't understand why her excellent training didn't translate in performance. Gabby's dad Michael told me to go cool off, which I did, but Gabby saw all that," said Rhonda.

"I kept saying 'something's wrong.' My intuition was right but not about the right thing at the time."

Daleman was starting to crash. Training in Toronto resumed. One day, she broke down on the ice, sobbing and exhausted. She called her sports psychologist who told her to see her family doctor immediately; the doctor said she needed to see a psychiatrist.

"What happened next was the anxiety and depression were in crisis mode, and shortly thereafter, Gabby became physically ill with pneumonia and strep throat." Rhonda says. "After her course of antibiotics, Gabby wanted to skate. Once on the ice, she tells coach Lee Barkell that she can't see. Her vision is completely blurred, and Lee says 'get off the ice.'"

Rhonda says Gabby complained of a severe headache and not being able to see. Rhonda knew this was not just pneumonia.

At home in the kitchen that day, Daleman collapsed and lost consciousness for a few seconds. Her terrified parents took her to the emergency room. The attending physician, after lots of questions, concluded that the fall at home was the result of an earlier concussion, likely the fall pre-Salt Lake City. But there were still additional issues of depression and anxiety for Daleman.

"We came to find out that many of Gabby's symptoms, including the depression, anxiety, visual disturbances and fatigue are common in patients facing post-concussion syndrome," said Rhonda.

As a parent, you know when your child is struggling. Once upon a time, you might have worried that your child might not make it back to their former competitive glory.

"I realized that it didn't matter how great an athlete she was, she needed to regain her health," Rhonda said. "She has two national titles, three if you count her junior title, one world medal and an Olympic medal; what else can you hope for as a parent with an elite athlete child?  The reality was that if she couldn't, she couldn't. It doesn't matter. My child's health is paramount."

Rhonda took five weeks off work to help care for her daughter until she was well enough to slowly start to come back to skating.

Theirs was a multi-pronged approach to Daleman's care. A strict diet to address stomach issues, a medication regimen, and appointments with psychologist, psychiatrist, sports psychologist, family doctor and ongoing support from coaches, friends and family.

The medication adds an extra layer of bureaucracy, requiring paperwork from the prescribing doctor and Skate Canada to apply for exemption status from World Anti-Doping Agency guidelines.

Daleman's progress has been encouraging, and she is returning to this week's Canadian figure skating championships in Saint John, N.B., to try for a third national title. Regardless of result, everyone concerned agrees it's wonderful to have Daleman back on the ice.

"This journey is so much harder than you think it's going to be," Rhonda said. "If you suspect or you feel that there is something out of the ordinary with your child, try and figure out what that might be. Never hesitate to get another opinion whether it is medical or from a friend, and then pay attention to what the professionals say and have patience with the process."

A profound question still hangs in the air: is figure skating part of the problem, or part of the solution to Daleman's battles with mental health?

"Both," says Rhonda. "The problem stems from the athlete's need for perfection and the pressure they feel to be perfect. The solution comes from the feeling that you skate because you love it. You can be a great skater, but it doesn't always have to be perfect for you to be successful."