Alex Bilodeau's historic gold medal at the 2010 Olympics in Vancouver would prove to be the first of many golden moments as Canada defined itself as a competitive force at the Olympic Games.

Valentine's Day 2010 was especially sweet for the Canadian sporting community. It was the early days of the 2010 Winter Olympics in Vancouver, and on that cold February evening, a nation's collective Olympic anxiety was eclipsed.

When Quebec's Alexandre Bilodeau won the gold medal in men's moguls, it was a message to the rest of the world that these Games would be different.

Canadian athletes were playing to win.

At both the 1976 Olympics in Montreal and the 1988 Winter Games in Calgary, no Canadian had managed to reach the top of the podium; Canada held the dubious distinction of being the only multiple host not to win a gold medal.

More than 500 Canadian athletes had tried and failed to capture a gold medal on home soil before Bilodeau stood at the top of the moguls run at Cypress Mountain in West Vancouver.

Needing a near perfect run to win, and with the home crowd chanting "Canada! Canada!" the Rosemere, Que., skier delivered the perfect moment.

"It's just the beginning, I think," Bilodeau, then 22, told CBC amidst the national celebration that followed. "There are so many Canadians coming up in the other sports. I'll be in the stands cheering for them. The party's just starting for Canada."

The young skier was right. As the next decade unfolded, Bilodeau's medal would prove to be the first of many golden moments as Canada defined itself as a competitive force at the Olympic Games. Perhaps no better emphasis of that was Bilodeau winning gold again in 2014, defending his moguls title in Sochi.

The Vancouver Olympics seemed to mark a moment when nearly all the Canadian athletes came to the start line with an expectation of success. And when they were victorious, they weren't shy to enjoy the moment.

WATCH | A decade of gold for Canadian Olympians: 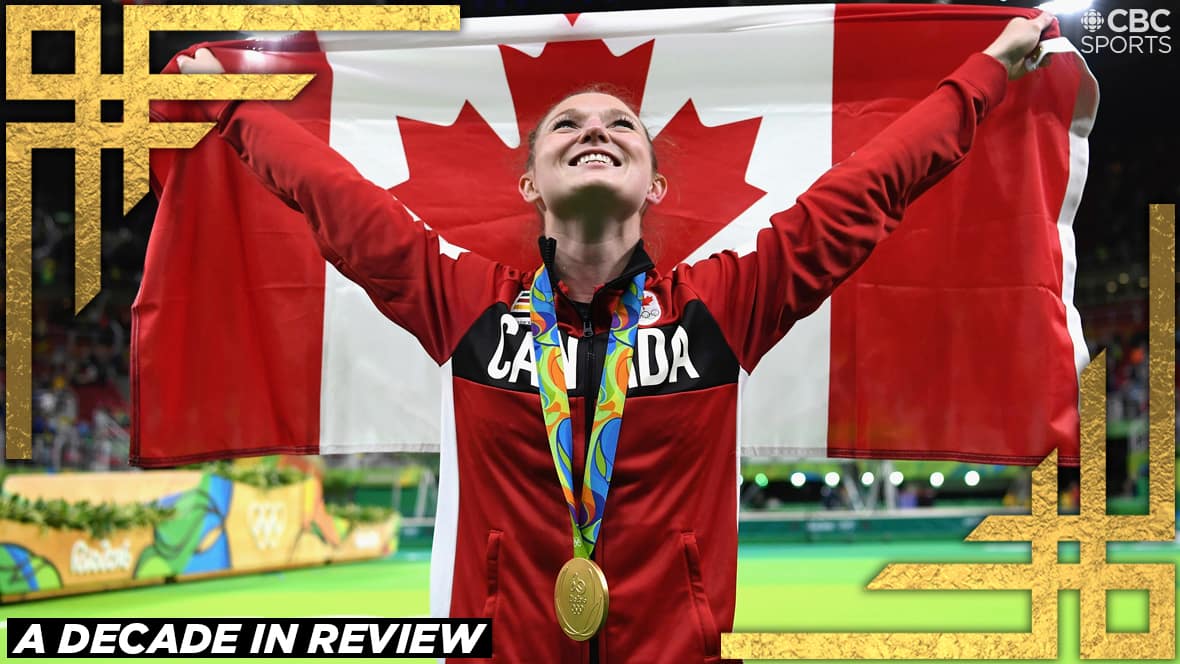 Canada's decade of gold at the Olympics

Skeleton racer Jon Montgomery celebrated his gold medal by parading through a joyous Whistler crowd holding a giant pitcher of beer. It was the quintessential Canadian moment and the kind of exuberance Canadians weren't used to.

Vancouver was full of many highlights. The women's hockey team beat their hated rival Americans to capture gold. And on the last day of the Games, an estimated 17 million Canadians tuned in to watch the Canadian men beat the Americans 3-2 in overtime to win hockey gold. Sidney Crosby's "golden goal" quickly became part of Canadian sports lore.

"A play that happened almost out of nothing turned into one of the greatest moments in Canadian history," goaltender Roberto Luongo said later.

"When I look back on that moment, it is special to talk about it, it's special every time somebody brings it up, it doesn't get any less satisfying," Crosby told CBC in a 2013 interview. "I love that moment. It's something I will have forever. It's not going anywhere."

Canada won 14 gold medals in Vancouver, more than any other nation and a record for a Winter Games. It wasn't by accident, but the culmination of a practical approach. When Vancouver was awarded the Games in 2003, the message quickly spread that these Games would have a different narrative.

"In order for the Games to be successful, we had to be successful on the podium," said Anne Merklinger, chief executive officer of Own the Podium. "Our Canadian athletes and teams needed to perform well and improve on the medal count from the two previous hosting opportunities."

Over the next few years and continuing today, hundreds of millions of dollars have been invested through the Own the Podium program with one goal in mind: making Canada a medal-winning force at both the Summer and Winter Olympic Games, an ambitious goal for a mostly cold-weather country of about 30 million people.

OTP's job is simple: identify athletes and sports where there is the potential of medal success and target funding and expertise to those athletes.

Merklinger said Vancouver showed this could actually work and marked a turning point for Canadian athletes.

"I think what happened in Vancouver and the performance of the Canadian team transformed sport in our country," Merklinger said. "I think it really was very much a cultural shift that everyone involved in high performance sports in our country believed that they could win, that our athletes can compete with anyone in the world."

Some of the golden moments have been achieved by athletes who will forever be a part of the Canadian Olympic conversation.

At the 2016 Rio Games, sprinter Andre De Grasse proved Canadians could compete in the biggest moments under the brightest lights. De Grasse captured a bronze in the 100 metres, silver in the 200 and capped off his Games with a bronze medal in the 4x100 relay.

And while the medals had Canada buzzing, it was De Grasse's playful competition with the sport's biggest star, Jamaica's Usain Bolt, which many fans remember.

Rio also saw Canada return to a place of prominence in the pool, led by teen sensation Penny Oleksiak.

Virtually unknown to Canadians heading into Rio, by the end of the Games the Toronto swimmer was a household name.

She captured four medals in Rio, including one gold that made the then 16-year-old Canada's youngest Olympic champion in history.

"I'm just happy that I made Canada proud and getting to look up into the stands and find my parents, it's just amazing for me and it's such a great feeling," she told CBC that day in Rio.

High jumper Derek Drouin also captured a gold medal in Rio. He will be looking to defend his title in Tokyo next summer. Drouin said that in the time he has competed for Canada, he has seen a profound shift among the country's athletes.

"In my first Games in London, I really did get the sense that a lot of people were just happy to be there, and in the four years between London and Rio that culture really changed," Drouin told the CBC in a recent interview. "I noticed it immediately within my own team, but also it seemed like a different vibe and motivation among the entire Team Canada.

"I didn't hear much of, 'these are my first Games' or 'I'm just happy to compete.' People genuinely believe they are capable of winning and capable of extraordinary things. That's motivating to be a part of."

While Canada has made huge inroads at the Summer Games, it continues to enjoy the most success during the winter. At the 2014 Sochi Games, Canada cemented itself as powerhouse on the ice by winning gold in both men's and woman's hockey and curling.

Sochi also gave Canadians another glimpse of figure skating duo Tessa Virtue and Scott Moir. The pair captured gold in Vancouver and dazzled the Russian crowd on their way to a silver medal in Sochi. But it was their gold-medal performance four years later in Pyeongchang that will go down as one of the most powerful in Olympic history.

Dancing to a song from Moulin Rouge, Virtue and Moir delivered a record breaking performance that left the crowd stunned.

"We still love what we do. It's personal this time. It was for each other. We skated with each other in mind the whole way and we skated with our hearts. It's extremely fulfilling."

The medal was one of 29 won by Canadian athletes in South Korea, the most the country's athletes have ever won at a single Winter Olympics.

Virtue and Moir announced their retirement shortly after Pyeongchang, leaving behind an arc of Olympic achievement that spans nearly the entire decade.

Canada's success hasn't been limited to individual stories. In London, Canada's woman's soccer team won the country's first medal in team sport at a Summer Olympics since 1936, defeating France to capture a bronze medal. The team followed that up with another bronze in Rio.

"We're tracking just marginally ahead of where we were heading into Rio so we're certainly in a good position, but we need to make sure that there's absolutely nothing is left to chance, that every potential gap has been closed," Merklinger said.

"Over these next 250 days that's our focus as an organization, to work very closely with every sport, with those athletes that are in top five, top six, or top eight heading into the Games and to ensure that they've had every opportunity to compete for the podium."

Canadians doing all they can to win on the biggest stage. And not being shy to tell the world about it.

"It's no longer acceptable to just show up, just to be there and I don't think that's a bad thing at all," Drouin said.

It's an approach that may chip away at our polite international image, but one that has been embraced by Canadian Olympians and celebrated by a nation all too happy to take part in the Olympic glory.