Newly departed Canadian Olympic Committee CEO Chris Overholt is making the move to esports as the head of Toronto's new franchise in the Overwatch League.

Move over hockey, baseball, soccer and football — there's a new league coming to Toronto with the hopes of carving out a spot in the sporting landscape of the city.

Toronto is now home to an esports Overwatch League franchise.

The Overwatch League, which just completed its first full season, bills itself as the world's premier pro esports league that has teams in the United States, England, South Korea, China and now Canada. Overwatch is a first-person-shooter video game, played in teams, that has claimed to have more than 40 million players worldwide.

Chris Overholt, who stepped down suddenly on Wednesday from his position as CEO of the Canadian Olympic Committee, has been named the Toronto team's first president and CEO. Vancouver is also getting a team, with the owners of the NHL's Canucks purchasing a franchise. 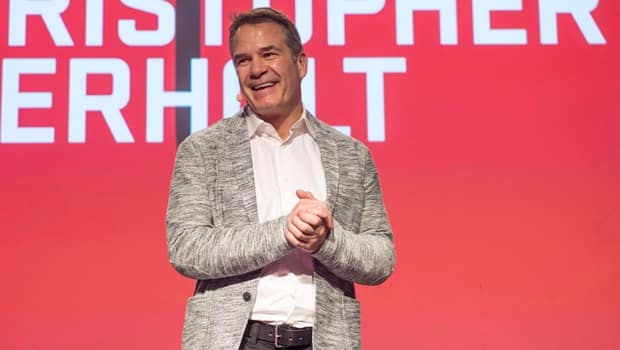 "Who could have predicted what [esport] is and what this has become globally," Overholt told CBC Sports. "This thing is not set to explode, it's exploding and I think we're well positioned to take this on in Toronto and Canada."

Overholt said the decision to leave the COC was the most difficult one he's had to make in his career, but felt the time was right to join a new organization that he feels he can help build from scratch. He says it's hard to ignore just how fast esports is growing around the world and he knows the time is now to capitalize on the popularity of it.

"I think this is going to be a global phenomenon and Toronto is now going to have a front-row seat to it. I'm really excited to be building again," said Overholt, who was approached four months ago about moving to esports.

"We have a clear vision and mission to build a world-leading professional esports company based in Toronto that will excite and inspire a new generation of fans in our market, across Canada and around the globe," Overholt said.

Under Overholt, Canada posted its best medal total at a Winter Olympics in February with 29 medals, including 11 gold. Canada's 22 medals, including four gold, at the 2016 Summer Games equalled the country's best performance at a non-boycotted Games. During his tenure, the COC also instituted the Game Plan program that helps athletes transition from their competitive careers into the professional realm.

Now he wants to take all of his past sporting experiences from the Miami Dolphins, Florida Panthers, MLSE and COC and put it into this new esports gaming franchise. There's just one catch — it's a little different assembling a hockey or basketball team compared to assembling an esports roster from scratch.

Overholt is making as many phone calls as he can right now to get up to speed on how to assemble the most competitive team possible.

"I was on the call this morning with owners about how we want to go about this from a competitive standpoint," Overholt said. "I've been in these conversations before in basketball and hockey but never this."

Overholt doesn't have a lot of time right now easing into his new role. In fact, this Sunday begins the free-agency period in advance of the 2019 season, which starts in December.

The franchise will play its inaugural season in Burbank, Calif., while a Toronto venue is  arranged for the 2020 season.

While Overholt's focus in the coming weeks is getting a competitive team in Toronto assembled for the first season, he's also thinking about long-term goals for esports, including being a part of the Olympic program.

IOC president Thomas Bach said recently there was too much violence in the games currently being played to be considered a part of the Olympics.

"The IOC is clearly engaged and interested in the phenomena that's developing here," Overholt said. "Last month I was invited to join a panel discussion by the IOC in Lausanne over a weekend that president Bach and former Lakers player Rick Fox co-hosted. It was two days all on esports. So the conversations are happening."​