Olympic champion of Germany Mariama Jamaka won the event in a two-run, combined time of one minute, 57.25 seconds. 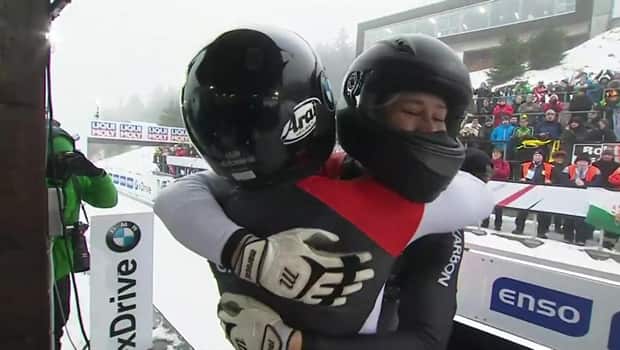 It was the first-career World Cup podium finish for both de Bruin, of Stony Plain, Alta., and Bujnowski, of Mount Brydges, Ont.

"I did not expect this, so it feels amazing," an elated de Bruin told Bobsleigh Canada Skeleton. "My only focus was on making sure I had clean runs. I knew if I nailed corners one, nine and 14, the results would take care of itself. But silver? I am super excited and happy."

'I am a driver through and through'

Seventh at last year's Olympics, the 29-year-old caught the attention of many with a two-run time of 1:57:56.

"Altenberg is my second favourite track to Lake Placid [N.Y.}. They are similar because they are driver's tracks," she said, "and I am a driver through and through."

A podium finish appeared to be a long shot for de Bruin and Bujnowski, an alternate on the 2018 Canadian Olympic team, who were sixth following their blast down the 17-corner track that was pelted by rain for the duration of the competition.

"We have always been able to have fun together and she definitely helped me stay relaxed in the drive," said de Bruin.

Fellow Canadian pilot Alyssia Rissling and rookie brakeman Bianca Ribi had a chance to hit the podium, but a mistake early in their second heat pushed her to a 10th-place finish. 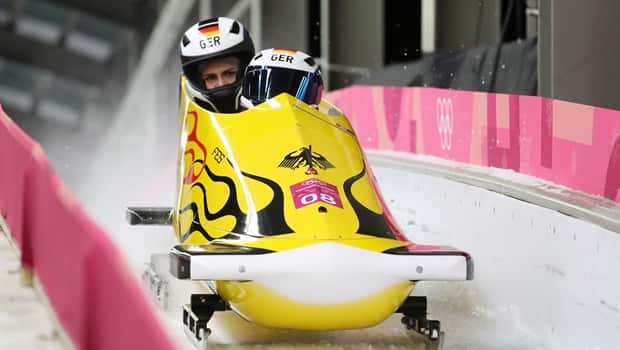