If Conor McGregor manages to knock out Floyd Mayweather Jr., Las Vegas bookmakers will suffer the biggest single event loss in the history of sports betting.

Conor McGregor is making a lot of wise guys nervous in this gambling city.

Should he somehow manage to knock out Floyd Mayweather Jr. in the early rounds Saturday night, the city's bookmakers would lose millions of dollars in the biggest single event loss in the history of sports betting.

McGregor fans have flooded sports books with $100 bills backing the mixed martial arts fighter, and even a late surge of money on Mayweather might not be enough to balance the books. 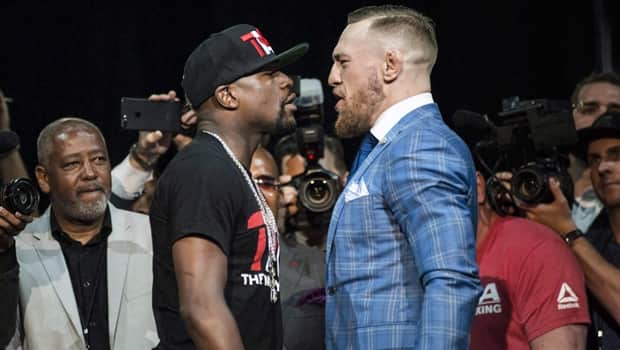 3 years agoVideo
1:29
CBC Sports' Jacqueline Doorey checks in on some of the big prop bets being made before the Mayweather and McGregor clash on Saturday 1:29

"I'm OK now," said William Hill oddsmaker Nick Bogdanovich. "But you might want to have a heart monitor on me when the bell rings and Conor starts throwing wild lefts."

Bogdanovich said his chain of sports books will suffer multimillion dollar losses — their worst ever — should McGregor win the fight in any fashion. If he wins early as he has promised, the losses would be even worse.

The big bettors are putting their money on Mayweather, who is 49-0 as a pro. But so many McGregor fans are betting small amounts that the betting slips at William Hill were 18-1 in the Irish fighter's favour.

"This isn't professional money, just the regular Joe," Bogdanovich said. "The butcher and the barber are putting their $100 US on McGregor and it's added up."

The action is reflected in the odds, which bookmakers adjust either way as money comes in on the two fighters. Bookmakers have been lowering the odds steadily since the fight was announced, but even that hasn't stopped the deluge of McGregor bets.

A fight that began with Mayweather an 11-1 favourite is now 5-1 or even less in some sports books. Even that hasn't stopped McGregor supporters from lining up at the betting windows to hand over even more cash.

They're backing a longshot, hoping that the payoff will be huge.

"There's plenty of money on a guy who has never been in a boxing ring," said Jimmy Vaccaro, oddsmaker at the South Point resort. "It's uncharted waters and that's what makes it so interesting."

There have also been big Mayweather bets at the MGM Grand, including a $500,000 wager on Wednesday. MGM Resorts oddsmaker Jay Rood, though, said the sheer volume of McGregor bets is overwhelming the big Mayweather bet.

If McGregor wins, Rood said MGM will be a big loser and the state will suffer its biggest single event loss ever.

"We're all in the same boat," Rood said. "Anything McGregor one to four rounds is pretty bad. Any McGregor knockout is not going to be good."

So far, the betting has been unusually active around town, bringing predictions that the volume could set records. Bookmakers say as the fight draws closer the heaviest influx of money will come, especially on Saturday.

The news is not all bad for oddsmakers, who have struggled to make lines for a fight that has no precedent. Most believe Mayweather is an easy winner and should be favoured by a much bigger margin, but have had to cut odds to try and balance their books.

Though an overwhelming majority of the tickets are on McGregor, a lot of books have more money wagered on Mayweather. Since bookmakers will have to pay out a lot less to those betting Mayweather, they will likely score big if Mayweather wins as expected.

"We're just kind of going along balancing and are in great shape win on both sides, no matter who wins," said Johnny Avello, oddsmaker at the Wynn resort. "A lot of guys are putting down $125,000 or so to win whatever on Mayweather so we're high on him now."

Even if McGregor wins and the sports books lose big, all is not lost. Bettors like to be reminded they can win, and the extra betting on football generated by McGregor bettors at the books will help ease some of the pain.

"We don't mind a large decision on a big spectacle like this," Bogdanovich said. "It gets people in our books."