Marchant comes in just shy of her Canadian marathon record 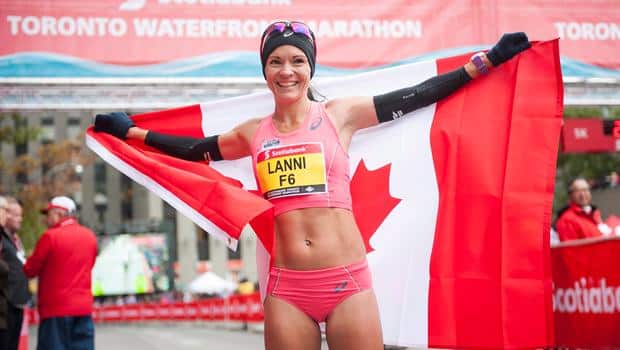 5 years agoVideo
0:13
The Canadian finished the Scotiabank Toronto Waterfront Marathon with a time of 2:28:09 on Sunday, qualifying Marchant for the 2016 Rio Olympics next summer. 0:13

Lanni Marchant turned the final corner just metres from the finish line, and peered up at the time clock and grimaced.

One goal accomplished. The other — oh so close.

The 31-year-old from London, Ont., achieved the marathon qualifying standard for the Rio Olympics, but missed breaking her Canadian record by just 10 seconds at Sunday's Scotiabank Toronto Waterfront Marathon.

"It's the Rio standard, that was the ultimate goal," Marchant said. "If I'd gotten the record that was going to be icing on the cake.

"Came pretty close, came around the bend and thought 'You've got to be kidding me."'

Marchant ran two hours 28 minutes nine seconds to finish fifth overall, two years after she set the Canadian record of 2:28.00 at the same race. A Canadian record would have paid her a $30,000 bonus.

Eric Gillis, a native of Antigonish, N.S., who trains in Guelph, Ont., also hit the Olympic qualifying standard, finishing seventh in 2:11.31 — easily under the mark he needed of 2:12.50.

Marchant and Gillis were named the Canadian marathon champions.

Marchant had already qualified for Rio in the 10,000 metres, and four years after she was left off the team for the London Olympics, she can breathe easy.

"It's just exciting," Marchant said. "It's something I've been working toward since 2012, it's awesome to have it pay off, and to know now I've got more than eight months to prepare and just have my mind around it, and not worry about chasing a standard."

Marchant and Gillis are the third and fourth Canadian marathoners to qualify for Rio — Krista DuChene already qualified on the women's side, and Reid Coolsaet on the men's side.

Achieving standard doesn't necessarily mean a spot on the team; Canada will take the top three men and women with standard.

"A big load (off my mind), I can plan now a little bit more," said Gillis, a two-time Olympian. "It's not official, I still have to wait to see what other Canadians do.

"But I really wanted to run in the 2:11s here, 2:11-something, that was one of the top three goals coming here. And did it. Feels great to do that. I knew I was in the shape to do it, but then you have to come out here the day of, and actually execute."

Marchant was under record pace through most of the 42.195-kilometre course that headed out and back along Lake Ontario, finishing at Nathan Phillips Square. But she's battled a troublesome calf injury for a couple of years, and true to form, the left calf cramped up with about 10 kilometres to go Sunday.

"I was just running on borrowed time at that point," Marchant said.

She and Duchene were both left off Canada's Olympic team for London. Both appealed the decision, and both were denied.

Marchant is considering running both the 10,000 metres and the marathon in Rio, a gruelling double with just a day in between events. She plans to focus on the 10,000, largely because of her calf woes.

Both Marchant and Gillis raved about the spectators that lined the course Sunday. The final stretch up Bay Street had a crowd a half-a-dozen deep.

"I heard a ton of people on Lake Shore (Blvd.)," Gillis said. "One of the best things about Toronto is the crowds out there, and the other runners, and hearing my name a ton on Lake Shore, that was great."