Canadian F1 driver Lance Stroll has captured the first Grand Prix pole position of his career. The Montreal native had the fastest qualifying lap at the Turkey Grand Prix on Saturday, finishing in a time of one minute, 47.765 seconds.

Montreal driver becomes 1st Canadian to do so since Jacques Villeneuve

Lance Stroll took the first pole position of his Formula One career at a rain-soaked and chaotic qualifying session for the Turkish Grand Prix on Saturday.

The Canadian driver placed 0.3 seconds ahead of Red Bull's Max Verstappen, who looked certain to take pole after topping the first two sections of qualifying and had the leading time in Q3 when his team aborted the lap to switch him from wet tires to intermediate tires.

"A special moment for me," Stroll said. "The highlight of my career."

The move backfired and Verstappen was left feeling bitter and angry at the call, using an expletive over the team radio to describe the tires.

Stroll, from Montreal, becomes the first Canadian to take a pole position at an F1 Grand Prix since Jacques Villeneuve accomplished the feat in 1997.

"I can't really put it into words. I'm shocked," Stroll said. "I nailed pretty much every corner and put it together." 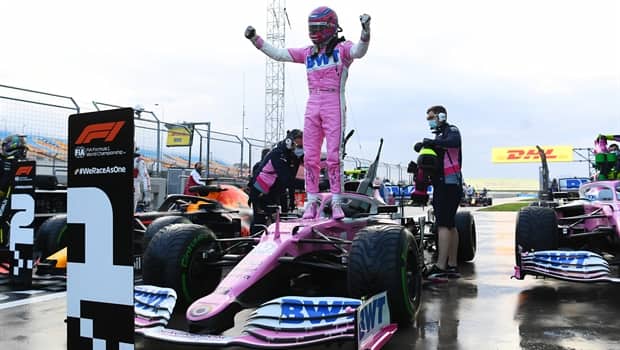 2 months agoVideo
2:18
Montreal native Lance Stroll has captured pole position at the Turkish Grand Prix with a time of 1:47.765 2:18

'Great way to bounce back'

The day belonged to Stroll, a much-criticized driver because his billionaire father owns the Racing Point team and because of poor recent form.

Since clinching the second podium of his career at the Italian GP in early September, Stroll failed to finish three straight races and placed 13th in the other.

"It's such a great way to bounce back after a few rough weeks," said Stroll, who had the coronavirus last month. "I haven't scored a point since my podium in Monza. It's been a rough run, with incidents and COVID. So much has been going on."

It was a miserable day for Mercedes, with championship leader Lewis Hamilton qualifying sixth and teammate Valtteri Bottas only ninth.

Both Ferraris failed to make it into Q3, with Sebastian Vettel in 12th place and Charles Leclerc 14th. Embarrassingly for Ferrari, Alfa Romeo drivers Kimi Raikkonen and Antonio Giovinazzi both made it into Q3 — using Ferrari engines.

Hamilton only needs to finish ahead of Bottas on Sunday to clinch his seventh F1 title and equal Michael Schumacher's record.

Earlier, Verstappen was again fastest in a cold and rain-soaked final practice on a slippery track that Hamilton compared to an "ice rink" after Friday's two practice runs.

Verstappen was quicker than Leclerc and Albon on a resurfaced Istanbul circuit last used in Formula One in 2011.

Hamilton did not set a lap time in the last practice. Bottas pushed hard in a bid to get some heat into the tires and was eighth quickest but a huge seven seconds off Verstappen's time.

Verstappen, who was fastest in both sessions on Friday, did well in treacherous conditions that caused several drivers to spin. Leclerc lost control early on and bumped Esteban Ocon's Renault off the track and McLaren's Carlos Sainz Jr. went off the track into the grass.

Barely 20 minutes into the session, Leclerc slid off and narrowly avoided hitting the crash barriers.

The race is being held without fans because of the coronavirus pandemic. This is the 14th race of the season and only three have been held with spectators.

A small number of healthcare workers will be allowed to attend the next two races in Bahrain as a reward for their efforts in fighting the spread of COVID-19.